New production of the Rodgers and Hammerstein classic tries to forget the Julie Andrews film, and finds new political relevance 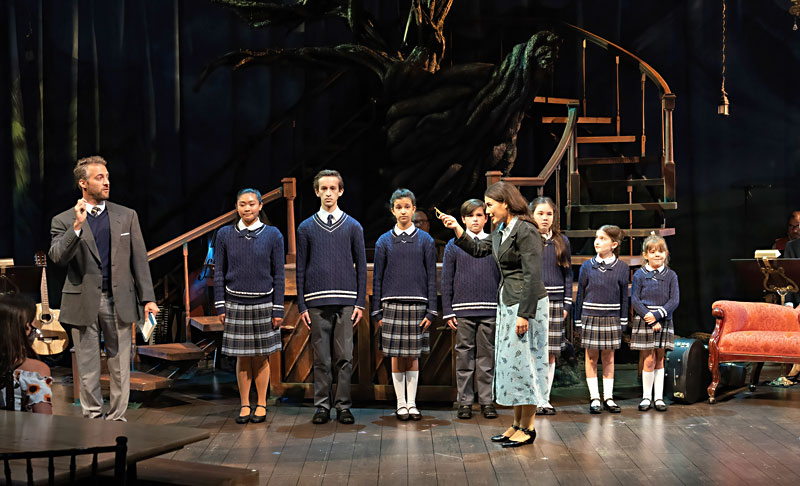 Although The Sound of Music began as a 1959 Broadway production that won five Tony Awards and ran for 1,443 performances, the now-iconic 1965 film version has pretty much ruined things for every subsequent production.

With sweeping cinematography that captures scenic Salzburg and the Austrian Alps, soaring orchestration, and brilliant casting – including the practically perfect Julie Andrews as Maria, the Nonnberg Abbey postulant-turned-governess-turned-matriarch of the family von Trapp – the Academy Award-winning film will forever be the go-to point of comparison for theatregoers. And so, it is the source of great consternation for theatres staging Rodgers and Hammerstein's last and arguably most popular musical.

Many productions of other stage-to-silver screen musicals, like the 2015 Broadway revival of The King and I, embrace the inevitable comparisons by mimicking key cinematic elements in their staging. But Zach Theatre director Dave Steakley has decided to shake things up by going in a different, more high-risk direction that both minimalizes and modernizes the staging of this classic tale. This will certainly piss off inflexible film fans who see The Sound of Music as sacred ground, but others will likely find that this thought-provoking production adds new and welcome dimension to the story, despite some unfortunate distractions in the storytelling.

Stephanie Busing's unique scenic design consists of one set – a huge tree against a muted backdrop of a painted hillside – where Maria sits and sings the titular "The Sound of Music" to open the show. Other locations are established by the introduction of a piece of furniture or two, the dropping of a window or chandelier suspended from the rafters, and Sarah EC Maines' lighting design. Upstage, on both sides of the tree, are seats and music stands for the orchestra. Downstage, toward the audience, is a festive biergarten of sorts where patrons can sit at tables, drink, and, according to the director's notes in the playbill, be a part of "the kind of shared audience experience I was after."

Those in conventional seating get a small taste of interactivity when actors enter or exit from the aisles, but watching the festivities onstage and not being a part of it makes for an odd and occasionally disengaging theatre experience. Also, the curtailed performance space given over to the actors frequently turns Anna McGuire's delightful choreography – best on display during "Do-Re-Mi" – into mere traffic control as performers navigate tables to play to the rest of the house. The onstage 12-piece orchestra (including music director Allen Robertson on keyboard) consists mostly of featured actors playing instruments and playing them well. Gone is the rich, saturated orchestration of the original work that lifted its listeners, but now Hammerstein's lovely lyrics get liberated and placed front and center.

The Sound of Music takes place around Anschluss, Nazi Germany's 1938 annexation of Austria. But in this production, there's a modern sensibility established through Susan Branch Towne's costuming, minor tweaks to the script, and the performers' mannerisms and intonations. There's also a subtly staged allusion to the current rise of neo-Nazis and white supremacists in our nation. Less subtle, and one of the aforementioned distractions, is the show's purposeful casting of a non-Aryan variety for the seven very Austrian von Trapp children – played on the night of my attendance by Francene Bayola, Ryan Crosby, Maleah Roy, Oscar Lopez, Avital Cuevas, Madeline Yang, and Juliet Todoroff – parasitic houseguest Max, played by Kenny Williams, and Maria, played by Amanda Rivera. It works, but it takes some getting used to.

Every adult performer comes with superb acting chops and a wonderful voice, with rather android performances turned in by the younger actors, save for Bayola as Liesl and Cuevas as Brigitta, who are authentic and always engaged. In fact, Bayola's performance of "Sixteen Going on Seventeen" with an abundantly endearing Tyler Hecht as Rolf Gruber is one of the production's highlights.

Rivera brings a charming sassiness to her guitar- and violin-playing Maria, which helps facilitate the story's abrupt and incredulous transitions that have Captain Georg von Trapp (a particularly accessible Trevor Martin) and the von Trapp kids falling immediately in love with her.

The small ensemble of nuns – played by Katie Horner, Selene Klasner (who also plays Frau Schmidt), and Jill Blackwood (who also plays the captain's fiancée, Baroness Schraeder) – produces angelic harmonies when not blowing into instruments. And Alexa Holland as Mother Abbess (who also plays Baroness Elberfeld and guitar) serves up an intriguing rendition of "Climb Ev'ry Mountain" that is more lounge-singer sultry than soul-stirring soprano.

This splendid but idiosyncratic retelling of a classic musical is not something one quite expects or necessarily desires. But now it will be the production to which others will be compared.

Zach Theatre's The Sound of Music 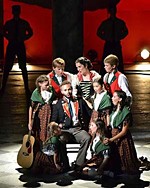 The Sound of Music, Zach Theatre