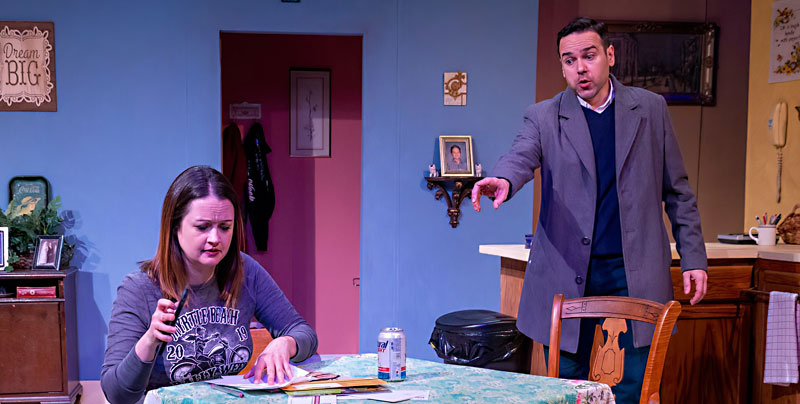 Natalie Garcia as Dee and Carlo Lorenzo Garcia as Charlie in Strange, but Perfect (photo by Steve Rogers Photography)

It looks as if the most powerful coronavirus variant isn't Delta or Omicron; it's literary metaphor.

The vexatious virus serves as the backdrop for Street Corner Arts' world premiere production of Carlo Lorenzo Garcia's Strange, but Perfect. More specifically, it provides the shared frame of reference for the play's two characters, strangers who have experienced great personal loss and a sense of social isolation at the hands of the pandemic. What makes this interesting and not just authentic is that the loss and isolation become the very things that bind them and, in this play, form a delightful one-act treatise about letting down one's defenses, letting go of one's paranoia, and finding room for a friend.

The comedy takes place during the lockdown days of early 2021 when Charlie (Carlo Lorenzo Garcia), a high-strung, low-level marketing assistant in New York, loses his job and decides to quarantine with his grandma Margie in her house in rural Virginia. Phone messages announcing his plans have gone unheard because his grandma has died and Dee (Natalie Garcia), a fast-talking self-proclaimed "trailer trash" townie who served as her caretaker, was not particularly diligent about notifying next of kin or checking the answering machine. Dee is now a squatter in grandma Margie's home and when she meets a surprised and indignant Charlie in the kitchen, it is immediately clear that the two are polar opposites and that compromise is not in either one's vocabulary. But over makeshift snacks, adult beverages, and a game of Yahtzee, they come to realize that they have much in common, not the least of which is the desperate need to connect with another human.

The banter between the two is all kinds of clever, with Charlie providing softball setups for Dee's humorous homespun retorts that, in turn, result in Charlie's well-timed double takes. But it takes some getting used to, particularly since the characters come across as broadly drawn upon their introduction, as if the actors don't factor in the intimate confines of Hyde Park Theatre's performance space, where there is zero distance between actors and audience. Yet the two Garcias soon find their proper footing and their remarkable chemistry draws us in even closer.

Director Andrea Skola Summers and her lighting designer Shelby Gebhart do a wonderful job keeping the production from lapsing into the rom-com it isn't and allow the subtle, potentially plot-twisting red herrings in the script to be merely the playful devices employed by the playwright to establish the aforementioned pandemic paranoia. The scenic design by Carlo Lorenzo Garcia serves up a small but comfortable and well-appointed first floor with only a couch, small table, and the area between them for the actors to inhabit. Still, Summers manages to keep the movement fluid, natural, and interesting all the way to the final scene, which incorporates some charming work by videographer Jason Graf.

It could be argued that it is too soon to use COVID as fodder for our entertainment. But after three sold-out weekends and an extended run through Jan. 29, Strange, but Perfect proves otherwise.