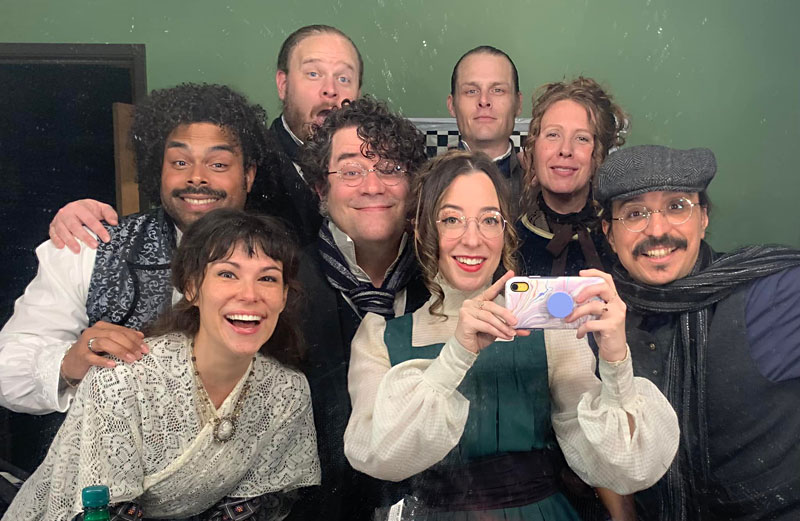 It didn't take long for Charles Dickens' five Yuletide tales to catch on as secular staples in mid-19th century England. With potent social commentary about the marginalized segments of society within their pages and a loving family at the core of their morals, the popular books and subsequent stage plays showed the industrialized Victorians the Christmas spirit they were sorely missing.

Today, in America, his sentimental A Christmas Carol (currently on stage at the Zach through Jan. 2) still resonates and the Dickensian voice that drives it – with its prim, reassuring British dialect – has long served as the soundtrack to our holiday season. So, it's only fitting that the funny, fast-thinking folks at Downtown Austin's Hideout Theatre have brought back its evening of devised Dickens-based long-form improvisation as alternative Christmas entertainment, appropriately titled Bah, Humbug!

Artistic director and troupe member Roy Janik stands in for the famous author who, after soliciting the audience for suggestions that inform that evening's performance, sits hunched over his desk and provides the intermittent narrative that sets the seven other troupers in motion. The source material's sentimentality and Dickensian voice have been properly pilfered for this production. Janik makes sure that Dickens' signature literary devices and familiar tropes – the chatty, catchphrase-sprouting characters, the contrived coincidences, the melodramatic plots with cheery outcomes – get their due.

Surprisingly, most of the company members selected to perform on the evening of my attendance struggled a bit with the demands of long-form and the Dickens tie-in. In fact, they seemed creatively hamstrung by the period costuming and the guiding narrative, which denied the kind of unsustainable, outside-the-box options typically produced for short-form improv. When dead air or a choice-gone-south occurred, performers were quickly cut off and redirected by Janik's intervention, which turned the improv mantra "yes, and" into "uh, no." This, in turn, caused spontaneity to temporarily stutter as if the targeted troupe member was sucker punched, and caused Sharon Castel and Michael Yew's lighting and sound effects, respectively, to lag behind.

But these are professional, thick-skinned performers we're talking about here and their eventual recoveries from being shut down were astoundingly brilliant. As the performance progressed, so did their secure footing in the diverse Victorian characters they possessed and the overall synchrony of the troupe. When the performance came to a close, the cast did a masterful job of calling back the things that worked during the evening and cleverly tying up all the loose ends.

For audience members weighed down by the pandemic and in desperate need of comradery and comic relief, the Hideout Theatre players' expressions of pure joy upon each other's discoveries were – pardon the unfortunate word choice – infectious. And so, warts and all, Bah, Humbug! proved to be a good night of comedy, which was probably never said about an actual play adapted from Dickens.