Hamilton's Return Still Lives Up to the Hype 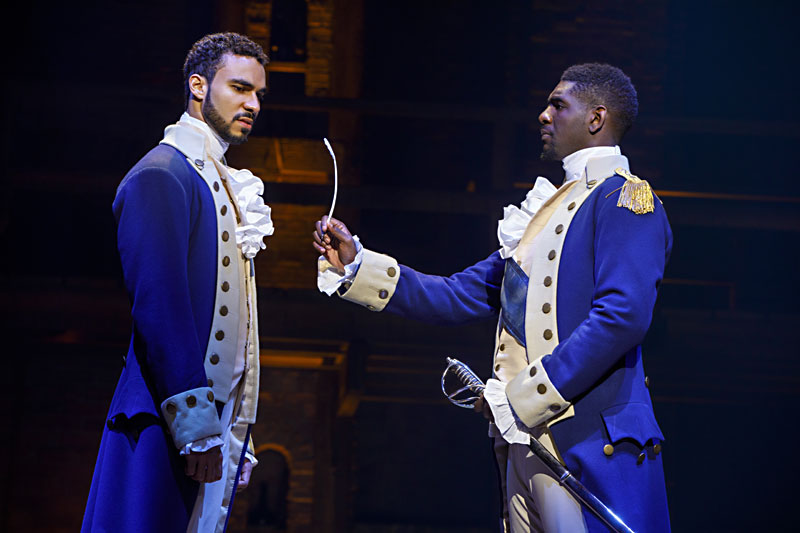 Austin Scott and Julia K. Harriman in the national tour of Hamilton (Photo by Joan Marcus)

It's been said that when the Renaissance artist Michelangelo was asked about the process of sculpting his marble masterpiece David, he responded, "You just chip away the stone that doesn't look like David." An equally astounding feat is Lin Manuel-Miranda carving a monumental musical out of Ron Chernow's 800-plus-page biography of revolutionary American Founding Father Alexander Hamilton.

So much was written about the work when Miranda and friends famously workshopped Hamilton's opening number of what was then a concept album at the Obama White House in 2009. And so much has been written since the musical transferred from off-Broadway to Broadway in 2015 to overwhelming acclaim. Now on tour, all that's left to write is the answer to three simple questions.

Yes, it is worth seeing.

Hamilton will likely be the most profound stage experience you'll encounter in your lifetime. Not since The Normal Heart's depiction of the HIV/AIDS crisis in New York City has political theatre resonated so strongly and dramatically with contemporary theatrical politics. Writer/lyricist/composer Miranda's musical is at once a celebration of a country founded on the sweat equity of young, forward-thinking immigrants and a criticism of that country's failure to recognize this history and these people. That criticism is established through the show's color-contradictory casting and Miranda's powerful rap-heavy lyrics and hip-hop- infused score.

The relentless energy, sustained intensity, and immense artistry that saturates the performance space come courtesy of Thomas Kail's fluid and always inventive direction and Andy Blankenbuehler's cinematic choreography – both of which make good use of two concentric turntables at center stage. And the production values – particularly Howell Binkley and Nevin Steinburg's lighting and sound design, respectively, are astounding. In short, the musical is the perfect storm of story and storytelling. It is not just worth seeing; it is worth the exorbitant price of admission.

Yes, it does live up to the hype.

Miranda has been recognized by aficionados of the art form as the next coming of Shakespeare, just after Stephen Sondheim. He is. Hamilton received a Pulitzer Prize for drama, 11 Tony Awards, seven Drama Desk Awards, a Grammy, and an unprecedented special citation from the Kennedy Center Honors. The MacArthur Foundation included Miranda in its 2015 class of "genius grant" fellows. In the song "My Shot" early in the musical, the title character notes that the nation's hunger for independence "is not a moment; it's the movement." The same can be said about this musical, which has single-handedly revitalized musical theatre by reinventing it.

Yes, it will win over Austin audiences.

The quality control invested in each of the three companies currently on tour pretty much guarantees an authentic replication of the Broadway production's staging, orchestration, and stellar cast of featured players and triple-threat ensemble members. The Angelica Company (which relaunched in Tempe, Ariz., this past September and is currently performing on the Bass Concert Hall stage) is stacked with talent. And it is so finely tuned that when Olivia Puckett, who plays Peggy Schuyler, needed to abruptly exit the stage on opening Wednesday night during the song that introduces the three Schuyler sisters to the audience, the cast moved forward without flinching until Puckett admirably returned four songs later.

Expect some creative and welcome tweaks in the gold standard of character portrayals created by the original Broadway cast and preserved in the Disney+ live recording of the show. Josh Tower as Aaron Burr, Zoe Jensen as Eliza Hamilton, and Stephanie Umoh as Angelica Schuyler reveal greater emotional range, which plays well opposite Edred Utomi's more controlled but still engaging depiction of Hamilton. Paul Oakley Stovall serves up a particularly soulful and reflective George Washington. And as audience favorite King George III, the British monarch who comically pokes holes in the American mythology, Peter Matthew Smith finds new business to perform in his delightful nine minutes on stage.

The only question left unanswered is: Have you ordered your ticket? 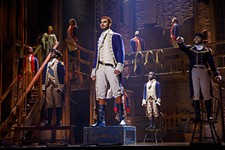