Opening the Glass Coffin, just in time for Halloween 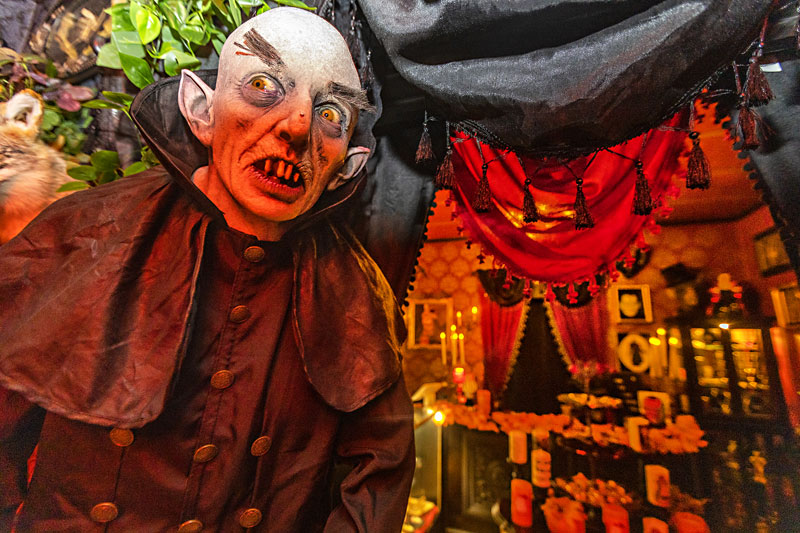 Nosferatu welcomes you into the store (Photos by Jana Birchum)

A towering Nosferatu, standing almost shyly across the entry room, is what my eyes shoot to the moment I step inside the new Glass Coffin's interior. Joey Slayne, owner of the local vampire parlor, just got the shy boy the day before and he beams as he considers where the figure's final resting place will be within the Coffin's expanded confines. Slayne and his shop have gone through a strange and sometimes scary journey, but from its pandemic grave, the Glass Coffin's possessed physical presence has risen – ready to have the time of its afterlife. Resurrected this month at a new haunt just off I-35, the final celebratory nail will be hammered in on Halloween with the first Bat City Antiques & Oddities Market: Vendors, music, drinks, and even a special appearance from Baphomet will celebrate the Coffin's grand reopening.

The Coffin's reanimation starts, as many horror stories do, with an unfortunate (but not permanent) death. According to Slayne, about a year and a half previously the landlords of the Coffin's old location on South First sold the property and gave the occupants 30 days to vacate. With the brick-and-mortar site staked through the heart, he kept the Coffin afloat through online sales – but limbo was taking its toll. "I had actually planned on moving to Chicago after I closed the shop," Slayne said. "I was really bummed and, you know, I was depressed. It was horrible ... like my dream of having a shop just came to an end." However, in a romantic twist of fate, Slayne stayed in Bat City after meeting his current partner, and a macabre summer trip through Midwestern and Northeastern spooky haunts refreshed his spirits just in time to see the "now available" sign on a little house off the north I-35 frontage road. Money, however, proved an obstacle, with vacation spending and reduced income from online sales meaning Slayne faced a tough decision. Opening a GoFundMe ran counter to his reluctance to ask for help – but in the end, "I just had to swallow my pride." Followers of the Coffin from Instagram, Facebook, and other people in Slayne's community donated, allowing him to put down a deposit and first month's rent on the new tomb. 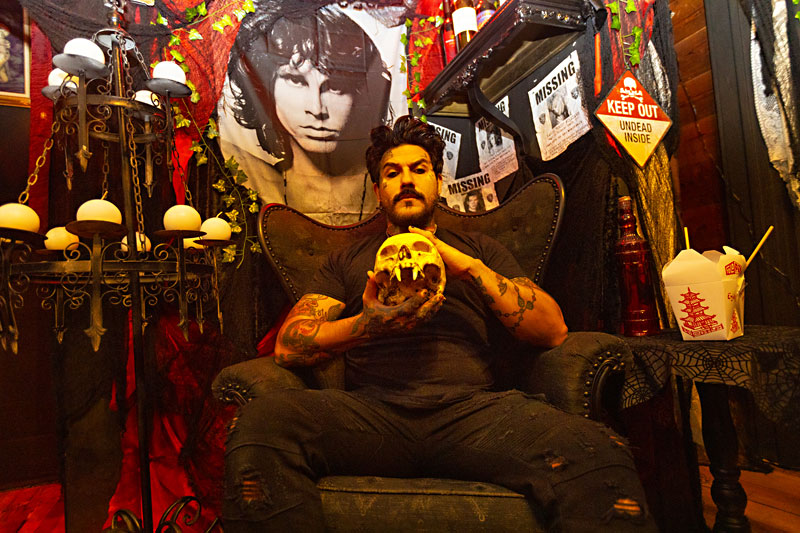 Heavily inspired by the dilapidated manor of FX's What We Do in the Shadows' quarreling vampire coven, the Coffin's new interior is rife with red lighting, dark curtains, mysterious corners, and antiques that thread it through with a genuine sense of joie de mort. The new location's larger insides also inspired Slayne to think bigger about the Coffin's offerings. While there is much from the original Coffin in the foyer, the checkout room, and the apothecary room – which boasts a display in honor of Slayne's favorite vampire movie since he was 11, The Lost Boys – new additions feature a large parlor/lounge, where Slayne aspires to host vampiric wine and absinthe tastings, as well as classes on bone articulation and different paranormal arts such as tarot or séances. And speaking of the occult, the new Coffin also holds within it a séance room, where the two resident snakes – green tree snake Hemlock and nocturnal snake Belladonna – live, as well as the beginnings of a haunted item collection. Current haunted items include a sealed-off Ouija board (donated by a local gay couple, which both the previous owners and Slayne claim caused knocking noises around the house when used), and a pair of little old boots once owned by a deceased child of the 1800s.

Vampires mean a great deal to Slayne, and always have. But for a long time, he wasn't sure how to integrate that passion into his life. He liked the idea of opening a shop, yet finding a name and direction proved difficult. After the loss of his mother in 2016, Slayne says she appeared to him in a dream, encouraging him to pursue opening up the Glass Coffin, a name that came to him once he awoke from the dream. Years later, having found a fresh and foreboding haunting location, the Glass Coffin endures, as does Slayne's passion for all things macabre: "I guess you could say I'm still that 11-year-old kid obsessed with vampires."

How to Spread Your Bat Wings

Conjure your inner darkness at these gothic stores. 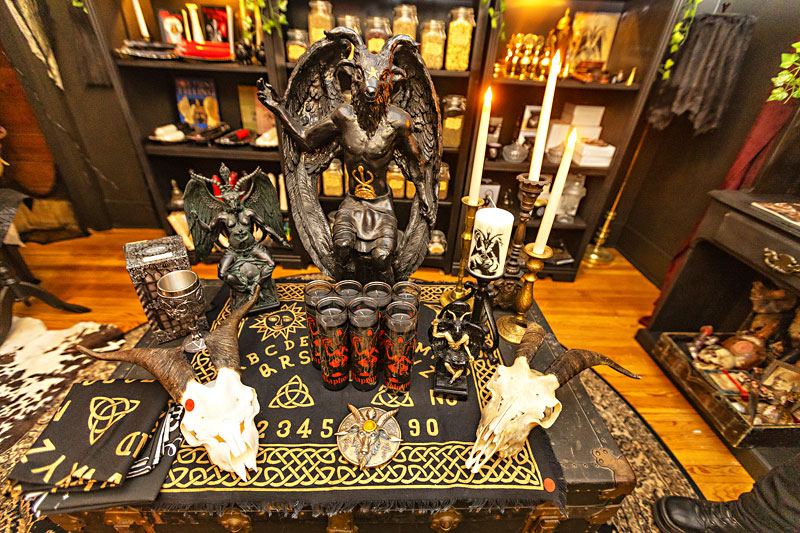 October invites us all to consider our creepier flights of fancy, to delve into horrors through costume, culture, and 12-foot-tall plastic skeletons scaling our houses. (Just don't let Joyce Carol Oates catch you on that one.) Stop limiting your macabre musing to just one spooky month during the year, dear reader. Take a walk on the dark side of Austin, and find a little joie de mort in yourself by visiting these cool cousins of the Coffin.

Shops for Your Goth Glow Up

Shops That Apotho-Carry Everything You Need for Your Next Ritual

Qmmunity: The Gift of Gay
Tips on how to shop small and queer from the Little Gay Shop’s Justin Galicz