“Hip-hop is a melting pot, a mestizo of the arts.” 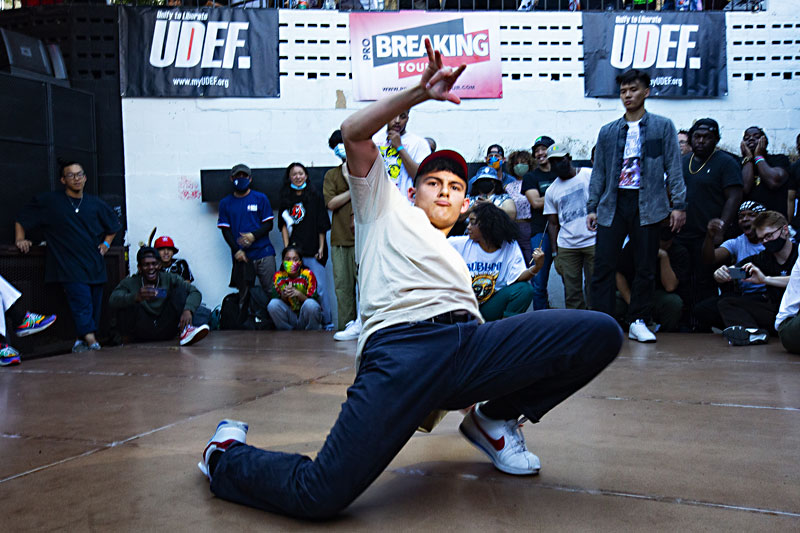 Euro-stepping, a flurry of children dashing gleefully across the polished hardwood floor of the South Austin Recreation Center gym. James Brown booms exuberant exclamations over rattling, syncopated rhythms. Crisp white leather gleams in flashes almost too fast to fathom – first high, then low. Kinetic energy flows outward from the center of the room, where two dancers, flanked by their respective rambunctious crews, relish in the thrill of battle, the joy of movement. The adoring and awestruck audience stands on tiptoes, desperate for a glimpse of the action.

This is where competition meets celebration, where rivalry surrenders to friendship, where a shared culture blossoms into community. This is BBoy City.

Over the course of 25 years, the BBoy City series of events has been a beacon of hope and a source of pride for a breaking (sometimes incorrectly referred to as breakdancing) community with local roots and global significance. That's largely thanks to the careful leadership and tireless devotion of founders Romeo Navarro and Roger Davis: two true OGs of the game who initiated the mid-Nineties revitalization of the Texas break-boy community, and have navigated and nurtured its evolution ever since.

“Hip-hop is a melting pot, a mestizo of the arts.”– Hope 4 Hip Hop co-founder Roger Davis

Austin's breaking history goes back to the late Seventies, when DJ Kool Herc's revolutionary sound brought hip-hop from the Bronx to take the South by storm. But while the cathartic promise of the breakbeat resonated in the hearts and bodies of local crews like CBS and the Rock City Breakers, the city itself was less welcoming. More or less explicitly discriminatory policies implemented by more or less explicitly discriminatory venues pushed the b-boys out of public spaces and onto the streets. With their tribalistic dynamic suddenly devoid of a meeting ground predicated on mutual respect for the cypher (circle), these crews lacked an outlet for the aggression inherent to and expressed through breaking – an aggression quickly mutating under the frustrations and injustices of 1980s America. "Everyone was against them, and there was no place for them to go," Navarro recalled. "You saw all that energy in the house [at the SARC]. Imagine all that energy with nowhere to go. Those kids were gonna take it somewhere else. And that's what happened – they rebelled."

Austin sprawled. Anger festered. Rebellion lost its way. And the art of breaking fell by the wayside, sentenced to the shadows of a weird city going through growing pains. But breaking refused to be forgotten. It evolved. It expanded. When a 19-year-old Navarro returned to Austin from studying at the Art Institute of Dallas in 1995, he resuscitated his childhood streets and neighborhoods by reviving an art form and culture on the brink of disintegration. "Gangs were killing each other, and they needed hip-hop," Navarro said. "That's how and why hip-hop was born back in the days. That's how it happened in Texas, too."

He built a new crew. He boasted a swashbuckling new style, one that articulated his voracious and adventurous appetite for all things dance. And he began mentoring local youth, working with Davis to provide a safe haven at the rec center where he grew up.

The success stories stack high. The duo's highest-profile protégé is now their business partner: Omar Davila, who grew up nearby, found his calling in the rec center gymnasium and proved himself on the BBoy City battlegrounds. Propelled by powerful, whirling airflares and backed by swaggering style, Davila's legend quickly grew: He was winning national battles at 16, then international ones at 17. In 2004, when Davila was just 18 years old, he won the first ever Red Bull BC One World Championship in Biel, Switzerland.

Those experiences – of travel, of a POV radically dilated by seeing a world whose size is beyond comprehension – changed him. With teenage dreams of grandeur already accomplished, Davila became profoundly grateful for the local community that had supported and sustained him during his global exploits and explorations, and he decided to follow in the footsteps of his hometown heroes, mentors, and friends.

In 2019, Davila, Davis, and Navarro joined together to found Hope 4 Hip Hop, a local, community-building collective dedicated to honoring and preserving tenets of hip-hop culture for future generations. "The mentorship and the platform they gave me is what we're trying to provide for the next generation here in Austin," Davila said. "It's about focusing on the youth: using hip-hop as a tool, as that outlet, as that anti-drug. Dance is the universal language, for all of us. We're using hip-hop and dance to teach them good morals, good values, hard work, dedication, freedom, inclusion, creativity – all those things that weren't as easily taught to us." 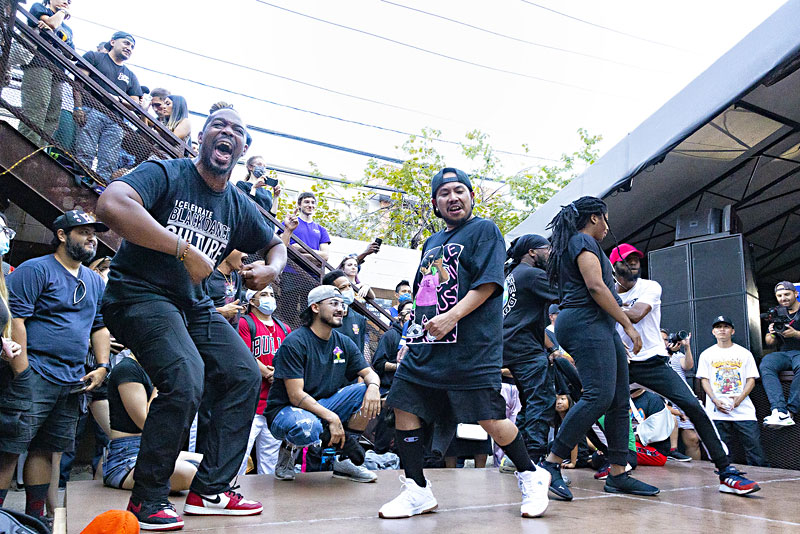 Scenes from the finals of this year’s BBoy City, held at Mohawk on Sept. 26 (Photo by Jana Birchum)

"We've learned from our mistakes," Navarro added, "and now we need to be instilling those values that we've learned in the next generation, so they don't have to go through what we went through."

The organization's holistic approach to teaching life through hip-hop revolves around their youth breaking academy, with its meticulously constructed and constantly evolving curriculum, but it also includes classes on the parallel pillars of graffiti and deejaying. "Hip-hop is a melting pot, a mestizo of the arts," Davis said. "It's the greatest creation known to man. Being one with the music, being one with the culture: These kids have got to understand that this is what you're a part of. This is where it came from. This is why we're doing this – teaching you how to write, how to listen, how to understand."

Led by Hope 4 Hip Hop's in-house Burn 'N' Serve crew, the youth showcase was the unforgettable, undeniable highlight of a truly tremendous BBoy City 2021. The final showdown between Houston's Havikoro crew and an Avengers-esque Red Bull BC One all-star team was fierce, ferocious, and breathlessly intense. The 3-vs.-3 all-style competition inspired unapologetic fun as dancers surprised one another and amused audience members with unconventional tricks. But it was the youth showcase – first at the South Austin Rec Center, then at newly renovated Waterloo Park, then front and center at Mohawk – that best embodied the camaraderie, the reciprocal love, the electric energy that makes the breaking culture and community so unique.

A tidal wave of admiration swept through the room as each young b-boy and b-girl (some sporting shy smiles, others beaming with aplomb) asserted themselves as the next to conquer the cypher, pounding their chests as if to say, "Make room. This is my time." Navarro radiated pride as his own son took the stage for his first-ever battle, with his first-ever crew. Everyone in the room, from world-class breakers to glowing parents to strange outsiders, breathed deeply, held it in: freezing time, if just for an instant, to savor a truly special moment of intergenerational connection.

Above all, Hope 4 Hip Hop embodies its leaders' crusade to preserve and produce those moments. From providing free intro to breaking classes at the Waterloo Greenway to forging a pioneering partnership with the new Hope Outdoor Gallery, the communuty is creating, maintaining, and elevating a platform for the next generation of creatives to learn from and participate in hip-hop history.

Some despair for the future of "breaking, the art form," an oasis of inherited knowledge, as "breaking, the sport," merges with the mainstream – beginning with the 2024 Paris Olympics. But these three cultural elders are unfazed and unafraid.

"What we do, keeping the foundation true and preaching to these kids, helping them understand where we come from, why it's here, why you should be a part of it ... that's the only thing we can control," Davis said. "Whatever's out there, whatever's next, we'll be right here, arms open to whoever wants to come and be a part of it."

Davila agreed. "Breaking is the original, traditional dance of the hip-hop culture. As long as events like BBoy City bring the energy, the fun, the party vibes that have been there since the birth of hip-hop ... that tradition and culture will be there."

Navarro was more emphatic and determined. "We're not going anywhere. We're gonna continue. BBoy City is gonna continue: a representation of how it started, what it's all about, 100% hip-hop. And our kids are gonna carry on that tradition, standing strong in something we take pride in." 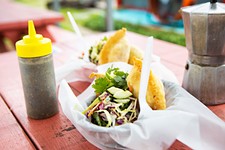