Women & Their Work's "We Know Who We Are. We Know What We Want."

In this inaugural exhibition at W&TW's new permanent home, nine artists provide an inquiry of breadth and depth 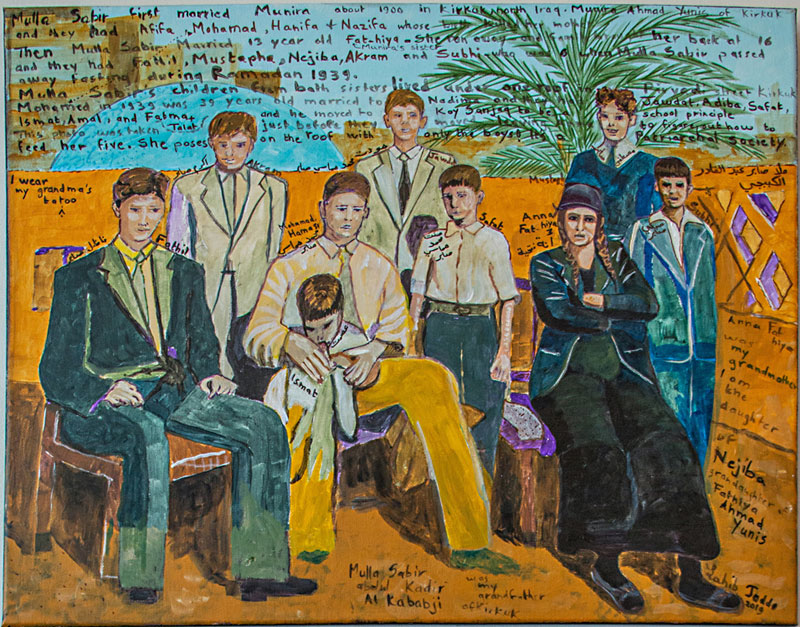 Light floods the new home – the new permanent home – of Women & Their Work, streaming through windows large and small all around, illuminating the art in "We Know Who We Are. We Know What We Want," the gallery's inaugural exhibition. These works, however, generate their own light – light released by some deeper understanding of who we are and how we live.

The nine artists in this group show delve into questions of place, of identity, of humanity, of history that inspire prolonged contemplation and discussion. I may not be the person best equipped to speak to all of the elements in the works here, being neither a woman nor a person of color, but I can say that what I did see, what I could grasp, held me, took me to places I'd not been, turned wheels in my mind.

To take one example: Rehab El Sadek, who depicts the elusiveness of memory in The Outsider. Five window frames hang next to the large picture windows on the gallery's west wall. Each of the frames is covered with gauze, and painted onto the gauze are buildings and text, but nothing is complete. Parts are faded or erased, as if the gauze, itself so fragile a fabric, could not hold on to the imprinted imagery, the memories of these places and words, and so they're now lost. Since the frames are hung before the windows that look out into a courtyard, the physical world is always visible through the works – the present always present as we attempt the Sisyphean task of reconstructing the past. El Sadek depicts our sense of the past as something tantalizing and beautiful but forever frail and incomplete.

Elsewhere in the gallery, the past is also summoned. Lauren Cross brings forward from her grandmother's time Black women – specifically religious Black women – who provided strength and leadership to their sisters in the faith. In Daisy's Casual Corner (Daisy being Mrs. Daisy Mae Harper Lucas, Cross' grandmother), the artist has taken a booklet illustrating ways to tie scarves (square drape, bay tie, bib drape, butterfly shawl, etc.) and by integrating photos of Black women activists into the scarf-tying instructions, made it also a tribute to these women. And in A Call to Black Women/Calling All Daisies, a suite of digital prints, she's merged images – trees, flowers in a vase, a potted plant, Black women of past generations – and text: "a politics of respectability," "tower of strength," "Jesus taught new attitudes toward women," the names of all the women in the Bible. We can see both an honoring of ancestors and a call to women now to emulate their example.

Lahib Jaddo recalls her grandmother as well in Anna and Mama on the Roof and Anna and the Boys, both painted re-creations of photographs of her in Iraq. In the latter, her grandmother Anna is with eight males, mostly boys, and on the painting Jaddo has written the detailed story of Anna's marriage to the same man her sister had married, after her sister died in childbirth; the children both sisters had by him; and how, after one of her adult stepsons moved away, Anna was left "to figure out how to feed her five" on her own. As Jaddo notes to explain why Anna is posing only with "the boys": "It's a patriarchal society." But she also notes: "I wear my grandma's tattoo." Those phrases inform everything about the work: Jaddo's knowledge of the restrictions and pressures on women in that world and her grandmother's strength in fighting it.

Much more is going on in the exhibit than artists exploring their relationships to the past. There are potent expressions of women being oppressed and shamed and denied their humanity, as well as women having their power and ingenuity affirmed. There are representations of one's struggles with contemporary issues and with connections with those who are different. Each artist is engaged in a meaningful investigation of life, and each artist is deserving of her own full review. I regret not being able to provide them.

Curator Vicki Meek has selected this exhibition's artists wisely, not only for their skill and artistry, but because they embody the two statements in the exhibit title. Looking at their art, they clearly know who they are and what they want. And since Meek has assembled women of such varied backgrounds, who approach their art from such different directions in such different mediums, they also embody the organization that's exhibiting their art. They are women, and this is their work – "work" not only in the sense of their art but also in the sense of their calling, their pursuit in life. Their work is to inquire into the human condition, the condition of being a woman, of being a woman in a patriarchal society, of being a Black woman in a white society. And in that work, they illuminate those conditions for all of us.

A version of this article appeared in print on September 10, 2021 with the headline: Investigative Work