The company has dusted off radio adaptations of Shakespeare, Fitzgerald, and Thackeray for the 21st century to hear – live 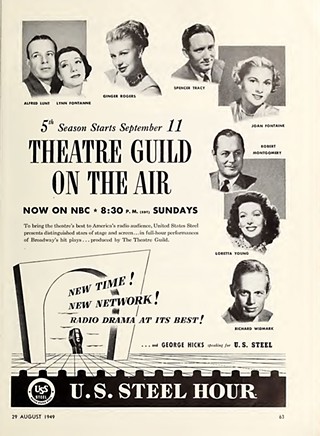 When we last heard from Penfold Theatre Company, it was bringing the future into the present, having a scientist 100 years from now call audience members to get help saving the timestream via the telephone drama The Control Group: A Mission in Time. Now, the company is bringing the past into the present, salvaging audio dramas from radio's Golden Age and performing them live for contemporary audiences. Starting Sunday, Sept. 5, Penfold will stage readings of three radio adaptations of literary works first broadcast on Theatre Guild on the Air in the Forties and Fifties.

Theatre Guild on the Air was one of many programs at the time that sought to lure listeners to the radio with familiar stories from the page and stage – Orson Welles' Mercury Theater on the Air being one of the most famous (and after the War of the Worlds hysteria, most infamous). To get folks to tune in for grand novels and dramas, the radio versions would usually be crunched down to an hour and beefed up with stars, and Theatre Guild on the Air was able to draw on the likes of Katharine Hepburn, Helen Hayes, Jimmy Stewart, Ingrid Bergman, Fredric March, Alfred Lunt and Lynn Fontanne, Charles Laughton, and even Austin homeboy Zachary Scott. However the show did it, it got those listeners – some 10 to 12 million a week a year after its 1945 debut – and it enjoyed an eight-year run on the airwaves before jumping ship to that upstart television, where it lasted another 10 years as the United States Steel Hour.

The University of Texas' Ransom Center has, among its vast collections, the Theatre Guild archives, which includes files for the Theatre Guild on the Air broadcasts, and that's what led Penfold to resurrect a few of the programs to launch the company's 2021-22 season. Penfold is actually an old hand at radio drama, having made its annual holiday tradition a re-creation of a radio broadcast of some classic seasonal film. Actors in Forties attire stand before microphones and act out Miracle on 34th Street or It's a Wonderful Life or A Christmas Carol, with live foley work, an announcer, and commercial breaks.

The Penfold Presents Theatre Guild on the Air readings will employ the same techniques for its performances of Shakespeare's Macbeth (original broadcast May 11, 1947, with Judith Anderson and Maurice Evans), F. Scott Fitzgerald's This Side of Paradise (broadcast April 8, 1951, with Richard Widmark), and William Makepeace Thackeray's Vanity Fair (broadcast March 8, 1953, with Joan Fontaine). However, there will be differences that a postwar audience wouldn't have been exposed to. Director Carl Gonzales' reading of This Side of Paradise will be done with all Latinx actors. Directors Marcus McQuirter and Rosalind Faires are both staging Macbeth and Vanity Fair, respectively, with all-female casts. (Full disclosure: Rosalind Faires is a Chronicle Arts contributor and my daughter.) To reiterate, Penfold is bringing the past into the present.

The company is partnering with another institution that knows something about past and present: the Neill-Cochran House Museum. This 19th century home in West Campus will host all three readings, and Penfold chose it to open not only the new season but a new series, Great Plays in Great Places, consisting of site-specific events that "present stories in conversation with unique places across Austin and the region."

Each Theatre Guild on the Air reading will take place on a Sunday at 6pm, and the hourlong reading will be followed by a discussion between the artists and the audience, moderated by Penfold co-founders and artistic directors Ryan Crowder and Nathan Jerkins, with – if you're lucky – Ransom Center curator and series dramaturg Eric Colleary. Oh, and last but not least, all the readings are free, though reservations are required. To reserve tickets, visit penfoldtheatre.org/event/theatre-guild-on-the-air.

A version of this article appeared in print on September 3, 2021 with the headline: Radio You Can See