"If These Walls Could Talk" at Cloud Tree Studios & Gallery 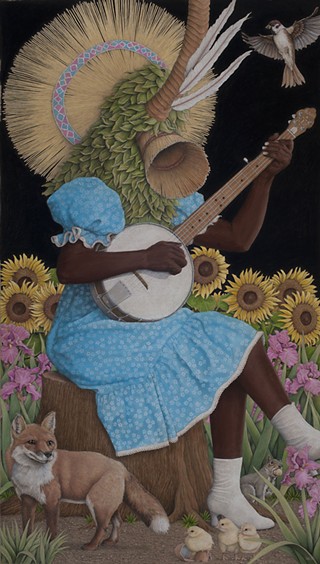 The title of the current exhibition at Cloud Tree Studios & Gallery sets up visitors to think, "Oh, what fascinating stories would be in store if only the works being shown had voices." But honestly, the art that co-curators Rachel Koper and Win Wallace have assembled in this East Fifth venue are quite vocal, and they spin some remarkable tales.

Take, say, Jeremy Burks' pieces from his Savage Lands series, in which preteens wear war paint and carry fierce weapons – a battle-axe, a spear, a club studded with spikes – while still clothed in mall-store Ts (little Giada's has "DANCE" stenciled across the front of hers). The vibe is very postapocalyptic, like the Texas power grid that failed in February never came back online, so the kids turned feral and made Tornado Alley their Fury Road. The wild ones in these portraits meet your gaze and challenge it, and such are Burks' skills at realistically rendering faces, and especially eyes, that you're persuaded actual children are staring you down. Azula may be the most intense of them. "You grownups are why we're like this," she seems to say. "You're to blame."

Then you have Jeff Wheeler's two freewheeling collages, jam-packed with seemingly random images in a host of styles. With their yellow road signs promising "scenic view ahead"; small, motel-style swimming pools (one marked to indicate where it's "Real Deep"); pasted-in photos of historical figures and folks from old yearbooks (students and nuns); floating Jesus heads; fires and fire hydrants; and references to Cézanne and Gauguin in text and images, they combine to spin some paperback narrative of Jack Kerouac and Neal Cassady as art school dropouts On the Road-ing it through West Texas.

Other Wheeler works here tell different stories: Two are rendered in shades of blue, and each depicts, in realistic detail and with sharp edges, a citizen being taken into custody by the police. One is the late John Lewis early in the civil rights movement, the other Derek Chauvin after his murder conviction. Both speak to this country's tragic history with race, coloring it in melancholy tones. Another painting looks to be a re-created yearbook page, with featureless faces in small boxes, lined and stacked in little rows. But it's something sadder: Lost in Texas (April 8, 2020) alludes to Texans who died from COVID-19 that day. Wheeler's stories here about loss and injustice may be ones we already know, but they're also ones we mustn't forget.

Across the gallery are other stories not to forget: those of groundbreaking musicians, artists, activists. Tim Kerr has painted a dozen portraits of such figures – among them Billie Holiday, Frida Kahlo and Diego Rivera, Rahsaan Roland Kirk, Charles Mingus, and Sun Ra – in lines and colors as bold as the women and men they pay tribute to, each with a quote that serves as inspiration. Each piece is a biography; collectively, they're a history of what visionaries look like.

Musicians also figure into Win Wallace's beyond-meticulous colored pencil drawings here. Each features one – a banjo player, an accordionist, a one-man band – in a garden lush with giant sunflowers and bearded irises, with various wildlife (foxes, beagles, mice, newly hatched chicks) at his or her feet and songbirds winging around his or her head. And the head, it must be noted, can't be seen because it's obscured by an all-encompassing mask that looks to have come from some ancient tribal ritual: an animalistic form made from wicker, feathers, fronds, flowers, leaves, and even a whole goat head. They give these otherwise genteel odes to nature in America, played on traditional instruments, a surreal twist; they're epic folk songs from Woody Guthrie by way of Salvador Dalí.

Niz doesn't shy away from surreality either here. Giant sunflowers crown one woman's head as honeycomb bracelets coat her arms; a cap with hawk wings at the temples and a wolf's head howling hearts to a full moon tops another's. With strong graphics and colors, Niz repeats old myths about the goddesses of flora and fauna in the fresh language of today. Gayla Partridge's sculptures of a heart and lungs work similarly: They retell the old story of how our bodies function as you'd see it in a medical textbook, but in doing it with beadwork, each bead like a separate cell, scores and scores of them together making up these fantastic organs that keep us breathing and living, Partridge reanimates the familiar tale, gives it new life.

That's all to say, wherever you turn in Cloud Tree now, the walls are talking. And the stories they're telling can be listened to again and again.

"If These Walls Could Talk"

A version of this article appeared in print on August 20, 2021 with the headline: Tell Me More