"Black Is Beautiful: The Photography of Kwame Brathwaite" at the Blanton Museum of Art 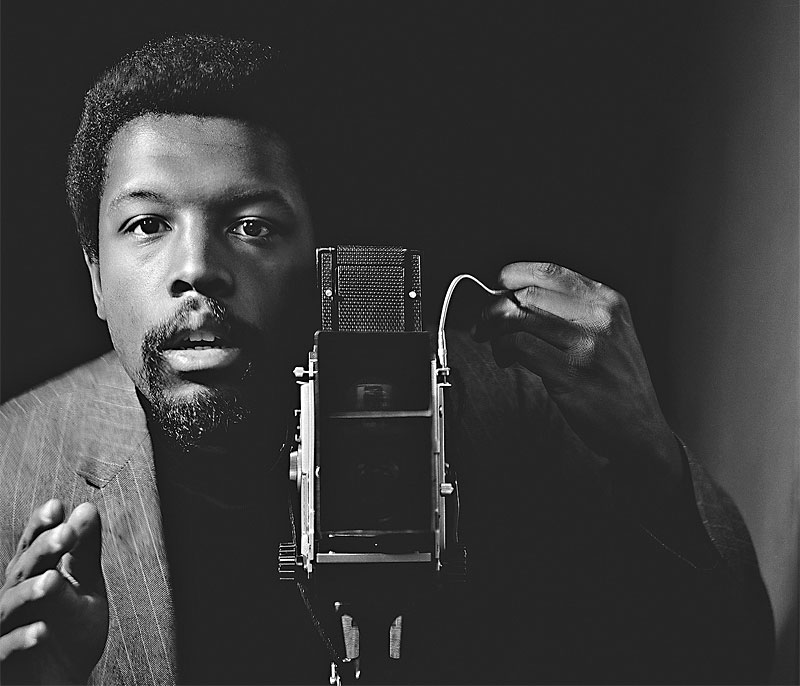 Every photographer wants to get the moment: that split second when every aspect of a great image – composition, light, focus, feeling, expressiveness – coalesces into a whole that can be captured with a shutter's snap.

Kwame Brathwaite knows how to get the moment, and for evidence you need go no further than the first image of "Black Is Beautiful," the exhibition celebrating his photography from the 1960s at the Blanton Museum of Art. Brathwaite has trained his camera on himself, but it's no smiley snapshot selfie. Rather, it's a portrait of the artist at work, concentrating intensely on his subject, watching, watching, like a hunter locked on his prey, waiting for the right instant to take his shot. The way his eyes are focused, his lips parted, his open right hand hovering tentatively, his tensed left fingering the cable release, Brathwaite looks to be holding his breath. He isn't certain he got the moment, but that instant of uncertainty, exquisitely lit and framed by shadow, is the moment. And he definitely did.

The touring exhibit, organized by the Aperture Foundation, features many such moments. One image of the jazz singer Abbey Lincoln shows her at the mic, head tilted back, eyes closed, mouth open as wide as it can be, in that moment when the music fully transports her and her voice rises from the center of her soul. Brathwaite captures it with such clarity that you can hear her singing. A similar photo shows Miles Davis at the 1958 Randall's Island Jazz Festival. Brathwaite, who was just 20 when he took it, is careful to include bassist Paul Chambers in the shot, but it's Davis who grabs your eye: He's in the foreground at left, aglow in the spotlight, leaning back like a bent bow, eyes shut, cheeks puffed, lips pressed to the trumpet mouthpiece, so you sense the flow of air through the instrument, past the valves – the fingertips just dots of light floating above them in Brathwaite's image – and around and around to be transmuted into music as it passes out of the bell, its edge gleaming. It's the moment of music alchemy, air into art.

But Brathwaite got the moment in more than music. Near the image of Davis is a captivating slice-of-life shot of a man at ease, seated, his back to the camera. His left arm is on the seat back and bent so his hand can cradle the man's head, which is tilted back and up, his gaze directed at the ceiling. Jutting from his mouth at a perfect 45-degree angle is a pipe, releasing little clouds of smoke into the air. The shot is beautifully composed – the figure low in the frame, but with the angled arm, tilted head, and gaze all pointing upward, to the smoke clouds, as if they're thoughts drifting away – but what makes it most memorable is the moment of private unguarded relaxation it reveals.

Brathwaite himself wasn't one for relaxation, judging from "Black Is Beautiful." The exhibition tracks the photographer's sustained activism through the Sixties, particularly his efforts to build unity, empowerment, and identity in the Black community. Through the African Jazz-Art Society & Studios, which he and his brother Elombe Brath helped found, Brathwaite organized concerts in Harlem and the Bronx, and through the Grandassa Models, an agency created to showcase Black women of all skin tones and natural hair, he co-founded Naturally, a fashion show and cultural event for the Black community designed, as its full name states, "to Restore Our Racial Pride & Standards." In the exhibition's first two rooms, we see this mission mostly expressed through smaller artifacts: album covers featuring Grandassa models, fliers for the Naturally extravaganzas, pieces of jewelry, and black-and-white photographs, all of which suggest a modest sense of scale for the campaign that Brathwaite and his associates were waging, one making incremental progress over the course of the decade. But when you round the corner into the third room, you're greeted with vibrant colors and a scale that's life-sized and even larger than life. On a platform stand three mannequins sporting original outfits made by Grandassa models – swirling oranges and greens, bold yellows and reds, richly textured crochet. On the far wall are large-scale color portraits of models (including Brathwaite's wife, Sikolo) whose skin, hair, clothing, earrings, and headpieces confidently proclaim, "Black is beautiful." Though their eyes never meet the camera, they radiate self-possession and grace. Looking at them, as well as at the clothing and the people in the room's other photos, it's clear that racial pride no longer needs to be restored. It is there. Kwame Brathwaite captured it and the movement leading up to it. That movement was the moment, and once again, he got it.

"Black Is Beautiful: The Photography of Kwame Brathwaite"