The company's avian-themed program includes five dancers, three cellists, and art from the atxGALS collective inside the Cathedral 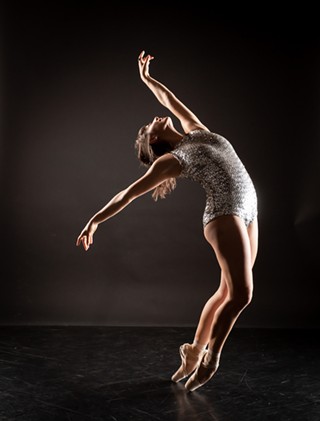 You don't often see them together – in nature, much less indoors – but they'll all be birds of a feather this weekend, flocking together inside the Cathedral as Ventana Ballet launches its third season with the program Night Birds. Each of the program's nine dances is named for a type of bird, with the movement intended to represent "the essence and beauty of the animal – paying homage to its nature, without being too obvious," according to AJ Garcia-Rameau, the company's artistic director.

Actually, Garcia-Rameau concedes, when the program was being conceived, the idea of "night" came before "birds." "We started by selecting the music, as we always do," she says. Three cellists will accompany the dancers, and in the musical suggestions they made, "it seemed that a 'night' theme emerged: Tchaikovsky's Nocturne and Beethoven's Moonlight Sonata were in the mix. One of the dancers explained that the "Prelude" from Bach's Cello Suite No. 1 reminded her of an owl …" and from that the avian concept hatched. A heron for the "Sarabande" in Bach's Cello Suite No. 3. A swan for Saint-Saëns' "Le Cygne." A nighthawk for Kodály's Sonata for Solo Cello. Mockingbirds for the "Allegro" in Vivaldi's Sonata in A minor. Petrels for Tchaikovsky's Nocturne, and so on. The last to swoop in in the program will be nightingales, "flying" to the familiar strains of Moonlight Sonata – though the piece will be played in unfamiliar fashion: by three cellos, in an original arrangement by Austin Camerata member Cory Blais.

Ventana is noted for the immersive nature of their shows, but unlike, say, The Watchmaker's Song, in which audience members moved through the Neill-Cochran House Museum to see the different dances, bird-watchers won't have to go scouting around the Cathedral to spy these creatures. Everyone will be seated around a central stage space, though the dancers – Georgia Brinkman, Rachael Hanlon, Tikiri Shapiro, Kanami Nakabayashi, and Garcia-Rameau – are likely to take flight through and around the crowd as they channel our feathered friends.

The performance is, like most current productions, a long time coming. Garcia-Rameau had initially reached out to Cathedral and atxGALS founder Monica Ceniceros about a possible collaboration before the pandemic. Her idea then was for the two to co-host some sort of gala. It had to be postponed indefinitely once the quarantine shut everything down. But as soon as a little light began to appear at the end of the COVID tunnel, Garcia-Rameau and Ceniceros began talking again. This time, however, they opted for something more intimate while still significant, the first show in Ventana's third season. Supplementing the Night Birds performances will be contemporary art by the atxGALS women's art collective, and complimentary beverages by Austin breweries and distilleries. If this program sounds appealing to you, then keep in mind that it runs only two nights, July 30 & 31, with two shows per night, 6 & 9pm. Wait until Sunday, and these birds will have flown.

A version of this article appeared in print on July 30, 2021 with the headline: Winging It 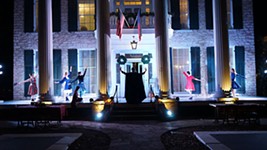