Guess what long-running comedy troupe is vaccinated, back onstage, and ready to make the city laugh again 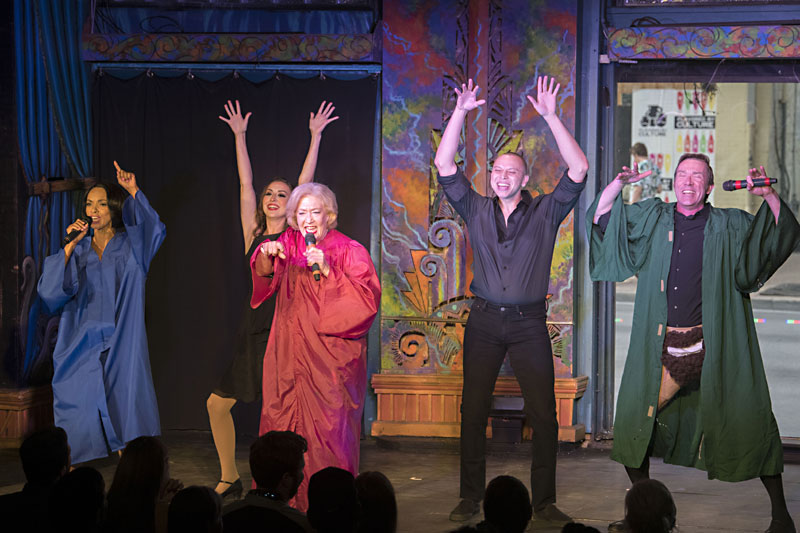 It's Thursday, June 17, 2021, the COVID pandemic finally dwindling in the rear view mirrors – and, in the bustling Downtown of Austin, the Esther's Follies comedy troupe is preparing to return to their live stage for the first time in 15 months.

More than a year of unplanned downtime has passed, with the writers and performers secluded in quarantine, each sheltering in their separate (or sparsely shared) abodes. More than a year in which a pivot toward Patreon-supported video content has been their sole means of connection with an audience, any audience. More than a year in which the internet has been the company's only connection with those for whom the Follies' mix of music and madcap sketches skewering the topics of the day is what makes life, no matter how harsh, more tolerable. Maybe – as Ted Meredith and Shaun Branigan crack wise in a political song-and-dance number, as Shannon Sedwick pulls another Patsy Cline prop out of her rigged dress-front, as magician Ray Anderson walks through a haunted mirror, as newcomer Timeca Seretti does a pop-star turn as VP Kamala Harris – maybe such clever antics even make life, in spite of its vicissitudes, worth celebrating?

And the lights come up. And the show begins. And – hold on there, hoss. It's been a while. There's been a plague on. There's been a snowpocalypse, too. How the hell did these showbiz stalwarts survive?

"We all kind of took it on the fly," says Sedwick, Esther's materfamilias and star performer. "And thank god we had some ideas to do the Patreon, because that was the one way that everybody stayed working and being creative on staff."

"We were already taking off two weeks for SXSW, as usual," says Meredith, "and then SXSW was canceled – not for anything it tweeted, but because of the pandemic – so we were thinking, 'Okay, two weeks, maybe it'll all be sorted out by then.' And then two weeks turned into – 18 months, almost?"

OK, so the man's math is a little off. But that's understandable, given the mushiness of time in 2020, and certainly Meredith's general acumen isn't lacking.

"Almost right away," he says, "Shaun and I had the idea to set up some way that we could do online content, so we could keep our most loyal fans aware that we're still alive. Because, every week, we were hearing another sob story about somebody going down, and we didn't want people to think we'd gone the way of, ah, half of Barton Springs Road and Cap City."

"And there was still funny stuff going on," says Sedwick. "Well, Trump was still president," she adds, suppressing a shudder. "And we didn't want to not be a part of that conversation, everything that was happening in the country. Shaun and Ted had moved in together and made their house into, basically, a big production studio." 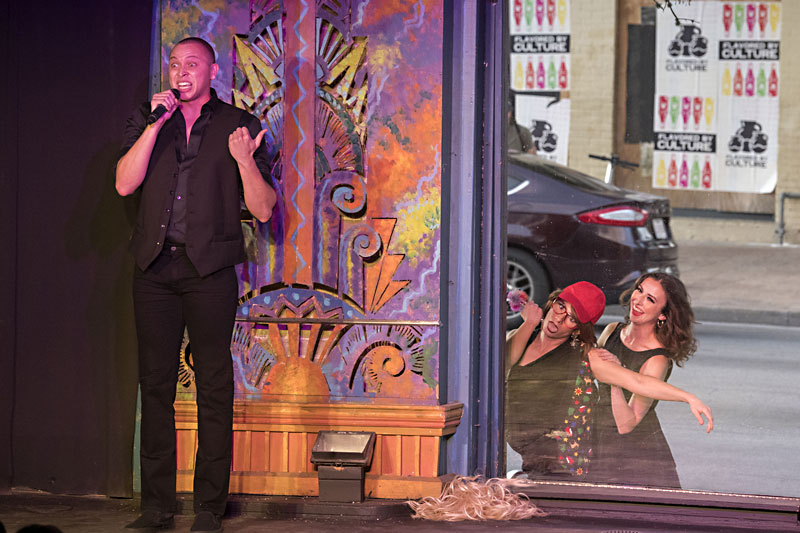 After more than a year of pandemic-forced sheltering, the Esther’s team is back in that live comedy saddle again – rocking their storied stage and the sidewalks of Dirty Sixth beyond. (Patrick King onstage, In the window: Rachel Pallante and Chelsee Jernigan.) (Photo by John Anderson)

"Yeah," says Meredith, nodding as if sagely, "OnlyFans is much more lucrative than Patreon." He grins at the arch magician. "But, yeah, we set up a sound booth in my closet, and we kept upgrading our green-screen technology until we had a nice setup downstairs. The first thing we did was the 'Quarantine Pie' video – which was a sort of somber, uh, what would you call it?"

"It was a look at Sixth Street," says Sedwick. "Patsy Cline just wandering around aimlessly, looking at all the boarded-up buildings in the city."

"But the buildings had all those drawings and paintings on them," says Anderson, "so there was something bright to look at, and there was hope. That was what gave everybody their heart in the very beginning."

"That was our first Patreon product," notes Doug Ewart, Esther's piano player. "It was a very touching video, and one of the best things we did."

"Everybody else was doing stuff on Zoom," says Meredith, "so it made sense to us, and it was an easy way for us amateur film editors to cobble together something, churning out material as quickly as we could. And as we went on, things got a little more intricate, a little more elaborate. It gave us an excuse to still have writers' meetings on Mondays – which was probably the most important thing to come out of all that."

"It kept our creative juices flowing," Sedwick agrees. "And we ended up with about 150 Patreons, give or take, almost every month. And that brought in a little bit of money, split it up among the actors and the producers and writers."

"Well, BeckiJo [Neill] was in Kansas for most of the year," says Meredith, "and we didn't lose her. The technology let us use people from different locations. The green screen put it all together."

So the Esther's gang soldiered on, together yet apart: plying their trade, working within technologically enhanced pandemic-protocol restraints toward the day when they could return to the Downtown venue's storied boards and greet their audience up close and personal again. The ship of acclaimed fools all steady as she goes, resolutely weathering the COVID storm, and – 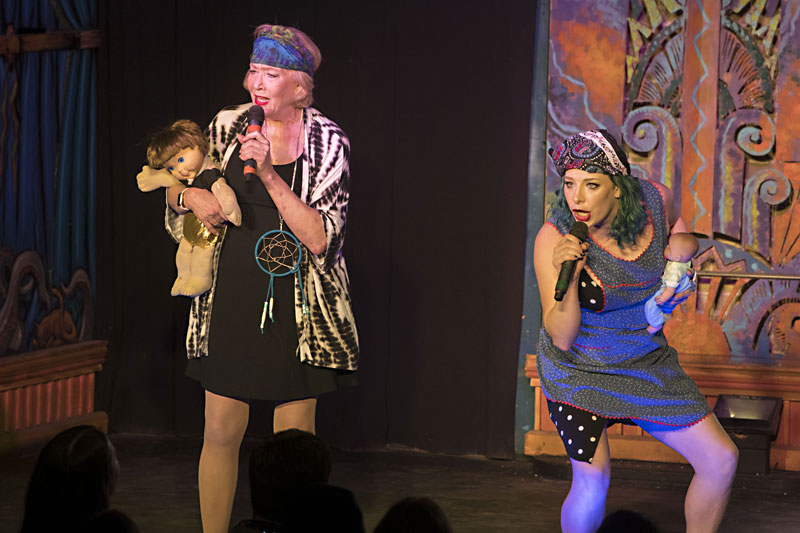 Reproductive health services for who, exactly? Baby-bearing Shannon Sedwick and BeckiJo Neill belt out those pre- and post-partum blues. (Photo by John Anderson)

"The ice storm in February was a nightmare," says Sedwick. "COVID was bad enough, but then –" She shakes her head. "I couldn't get out of my house to check on the theatre – we were snowed in – but we had somebody who contacted us on Instagram, who said, 'Did you know that there's water just gushing out the back door of your theatre right now?' So my husband Michael [Shelton, Esther's co-owner] managed to find somebody with a four-wheel drive to bring him into town. And it was – it was a mess. The sprinkler system had exploded, right over the women's bathroom."

"The entire lobby was covered in water," says Anderson, "and it went all the way down the aisles and backstage."

"And into the Velveeta Room next door, too," says Sedwick.

"But all of us from the cast came and we dug it out," says Anderson. "Now, that's teamwork."

"That was the first time we'd been together since the pandemic started, actually," notes Sedwick. "We hadn't seen each other physically for months. And we've cleaned a lot since then, but we still had the windows blocked up at that point, and when we were able to take the window coverings off and see the sunshine out there again ..." She smiles, thinking of it.

"That was a huge thing," says Anderson. "You wouldn't think it would be, but it was: just the light coming into the theatre, giving it breathing life again when those panels came down."

And now the performers have returned to the stage of their theatre at the corner of Sixth and Red River, ready to bring their own form of light back into a city's that's been shuttered for so long. And the lights come up. And the show begins.

The house was packed on June 17, as the troupe opened with a musical delight based on Prince's "Let's Go Crazy," the warped homage a rousing hallelujah that kicked the remains of coronavirus to the curb and celebrated the return of live entertainment to a place that's known it for around 40 years. From there the action flowed onstage (and out to Dirty Sixth, as seen through the big front window) in a wild river of sketches and songs, solo performances and group efforts, old favorites (the Patsy Cline and Dr. Seuss bits, Anderson's mind-boggling illusions) vying with new material (an especially kickass musical number featured admiring caricatures of Nancy Pelosi, Kamala Harris, and Alexandria Ocasio-Cortez) for audience cheers and laughter. Well, "vying," but of course it's not a competition. Everything worked together and was damned good at what it does – bringing big grins and belly laughs to a ready-for-it crowd. Among that crowd: longtime Austinite Chris "Uncle Staple" Nicholas, who'd never been to Esther's in the Before Times. "Ow, my face hurts from laughing so much," he complained later. "That was some really excellent shit."

And will this, ah, excellent shit continue? Can it even afford to?

"We did get lucky and got the PPP loans," says Sedwick. "And we got a couple of grants – the legacy business grant from the city of Austin, that's coming through – and we're hoping for that Shuttered Venue one, too, but it hasn't happened yet. I'm watching our email. But the city has really come through. And Michael hired a new guy to work on lights – they were one of the things that got messed up in the ice storm – so we have a whole new LED lighting system."

"Esther's has been here for 45 years," says Anderson, "and it's a part of Old Austin, one of the last places you can go to. And that alone has us getting up every day, to make sure it keeps going. It's a responsibility to the city as well – not just for ourselves, but to Austin. And we have a pretty young cast, now – they bring their own sensibilities and keep us up to date. But that's always been the case: The new blood always brings new ideas."

"And their blood marrow," adds Meredith with a faint Hannibal Lecter smile. "Feasting on that is a great source of energy."

A version of this article appeared in print on July 16, 2021 with the headline: Guess Who's Funny and Vaccinated