An Austinite Rides Across the Lower 48 to Honor His Father Ian Michaud pops onto the screen with an unruly beard, slightly sunburnt cheeks, and tousled hair. In fairness, his head has spent the past 12 weeks under a bike helmet.

He answers the Zoom call from Prineville, Ore., in the last weeks of his bike ride on the Trans-America Trail, a route which goes from Yorktown, Va., to Astoria, Ore. Along the journey, he encountered bears and passed out twice from heatstroke in Hells Canyon. He also raised over $18,000 dollars through a "Ride Against Suicide" GoFundMe for Integral Care, an Austin mental health clinic.

Michaud was driven to bike the trail by the anniversary of his father's death, who took his own life in 2016. Although he had never bike camped before and his first practice ride in January lasted only 45 minutes, by spring Michaud had worked his way up to biking 100 miles per day.

"I remembered the last time I saw my dad, and how much he was struggling, and how we didn't talk about it, and how we did nothing," Michaud says of his father's struggle with depression. "I wanted to be an example that you're never stuck in that regard. You can always change your course."

Michaud embarked on the journey with his uncle, who he calls an avid cyclist. The pair biked 60 to 80 miles per day, finding shelter in campsites, hotels, and strangers' houses. Michaud says he stayed in the home of the mayor of Hudson, Kansas (the mayor's wife, Michaud reports, made incredible cinnamon buns), an 84-year-old Alaskan's house in Missoula, Mont., and, slightly less luxuriously, a shed in Prineville, Ore.

Parts of Michaud's trip caught him off guard: an unexpected love for Kansas, a surprisingly dry Eastern Oregon, and Idaho clinching the spot for favorite state.

He says one of the most meaningful aspects has been connecting with other people who lost loved ones to suicide. "You have a deep, kind of heartfelt conversation with somebody who you just met, and you have this connection where it feels like you were meant to talk," Michaud says.

In addition to the human connections, Michaud says he enjoyed the company of cattle along the road. One cow makes eye contact, he explains, and the rest of the herd follows suit. "As you zoom out, now there's 30 cows staring at you and then there's 100," Michaud says. When he was lucky, they'd get spooked and run alongside him.

On tougher parts of the ride, Michaud says he focused on each pedal rotation, counting to seven and starting over again.

"My expectations for this were to finish," Michaud says. "No matter what I encountered ... to just keep going and to keep pedaling."

After Michaud finished his ride on June 17 – the farthest he had ever traveled west – he had one final trip before returning to Austin: a visit to his father's grave, where he planned to place the shoes that took him across the country. 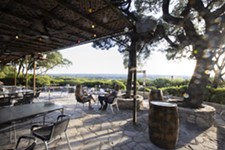 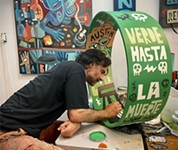