The short stories in this collection from Austin's Awst Press simmer with queer rage, grief, and longing 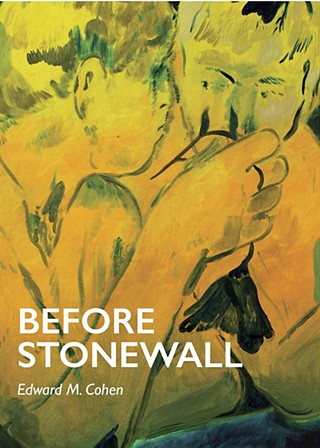 You have a word on the tip of your tongue. You know it but you've just forgotten it, or you know it and you're scared to say it, or you're feeling something new and strange and you are praying that there's language for this, that you're not the only one. The nearness of the word is maddening, whether it's an inch or a mile away. You might lash out. You might fall into a funk. You might find yourself squinting off in the distance, trying to imagine a world where the word comes easily, no trouble at all.

A reaching for language and understanding threads throughout Before Stonewall, playwright and author Edward M. Cohen's new short story collection. The narrators and protagonists of these stories are almost exclusively young gay men working in and around the New York theatre scene between 1948 and, as the title suggests, June 1969. It's not just their own queer desires and the strictures of the time that stymie them – they also work at comprehending how their parents and peers move through the world, how ambition motivates some people while others settle, what pursuing art looks like to themselves and others, why they themselves are so angry or scared or changeable or lonely.

A High School of Performing Arts alumnus aches over the classmate who most deserved a shot at fame in "Golden Boys and Girls," we follow the misadventures of an aspiring actor/part-time furrier employee in "The Wonders of Art," see tumultuous gay relationships marred by distrust and violence in "Cream of Mushroom Soup" and "This Treacherous Life," and wrestle with the legacies of complicated mothers and fathers in "Choreographer," "Shiva," and "Cheez Doodles." With so many of the stories written as first-person reminiscences, it's tempting to approach this anthology almost more as an intimate oral history than a short story collection, but that undersells Cohen's craft, both in individual entries and the collection's overall composition. We see gay slurs wound closeted protagonists, the specter of McCarthyism infect everything and everyone with a fear of traitors and subversion, furtive glances be misinterpreted and overanalyzed – again and again, forced secrecy and shame decaying friendships, curtailing necessary conversations, and breeding melancholy and rage in our protagonists. But still there are these little points of light, the moments of laughter, the sheen of youth and beauty and promise on so many characters. The past may be threatening, but it's hard not to want to gaze at it, take it all in.

The bookends of the collection, "A Story of Early Love" and "After Stonewall," are clever entry and exit points, asking bittersweet questions about what it means, as a queer person, to envision yourself as a protagonist. In the former, an unnamed narrator recalls the crush two straight 10-year-old schoolmates had on each other, a tale he focused on before he was capable of dreaming "new stories in which [he], perhaps, could play a part," and in the latter, an "old-timer" named Al cruises, people-watches, and converses with old friends in a Kingston, N.Y., park late at night. In both, there seem to be intermingled love and mourning for younger selves who survived material danger because of who they are, though they might not have always been able to put into words what made them different.

There just might be an invitation there – not just to cherish the stories of our queer elders who have survived illness, cruelty, and silencing, but to forgive ourselves when we need to take our time to find our words and speak them.

A version of this article appeared in print on June 25, 2021 with the headline: Finding the Words