Painter Bradley Kerl leads us from inside to outside and beyond 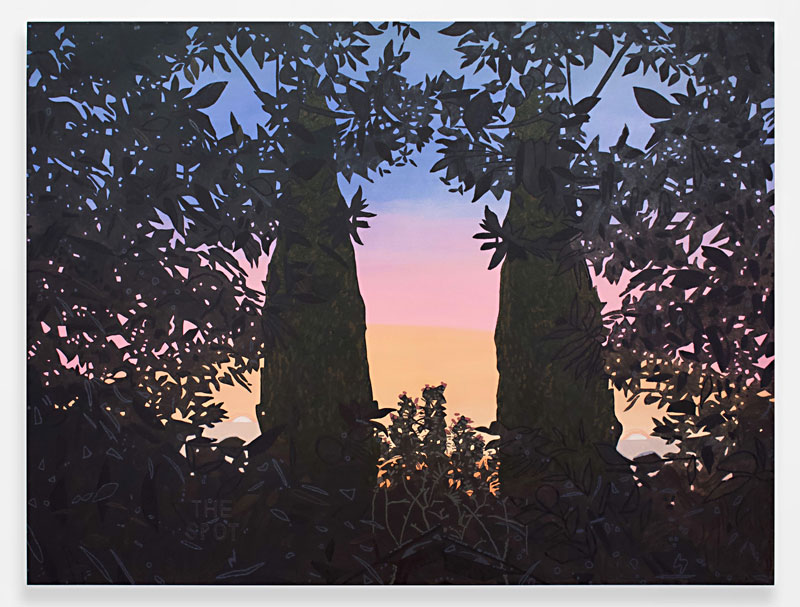 The Spot (Delight in the Light) by Bradley Kerl

The sky is in that brief time of transformation that comes every evening at twilight: The last vestiges of day are shading the clouds in pastel pinks and lavenders as night drops from above in a canopy of cobalt and indigo. It's a natural wonder that you want to see spread from horizon to horizon, but here you can glimpse only a fragment of it, through a window set high on a wall in a dark room – a box surrounded in blackness, criss-crossed by silhouetted bars and a diamond grille metal covering. Looking at Bradley Kerl's painting A Warehouse Window Sunset, it's easy to feel thrust back to that time when we were held indoors and left to witness the movement of nature through a frame and panes of glass.

In Ivester Contemporary's exhibition "Balm," this isn't the only work of Kerl's with a view of the sky that's partially blocked. Beside A Warehouse Window Sunset is The Shape You Take, which is dominated by a white window grille so large that just parts of several panes are shown. In the center of the center pane is what may be a half-moon – the painting's muted shades of violet and midnight blue suggest an evening scene – around which swirl irregular circles like a celestial whirlpool. With a shadowy figure in the work's lower right corner – the viewer reflected in the glass or someone outside the window? – there's a sense of being apart, alone with the night. For anyone ever stricken with insomnia during the long nights of 2020, this painting may strike a particular chord.

If you move from these works to the left, you encounter obscured sunsets again. But in The Spot (Delight in the Light) and Look for Me When You're Back in Tuscany, no windows keep you from seeing dusk descend; it's just foliage between you and the twilight sky – leaves, branches, tree trunks – and though they stand between you and the view, they don't feel like barriers. Kerl has made the growth neither too dense nor too threatening – indeed, the way he has two trunks in The Spot (Delight in the Light) frame an open area in the center of the canvas, he practically invites you to step through. For someone like myself who's susceptible to narrative, the four paintings feel like a progression: After being kept away from it, we're coming back into the world.

As you move past those works, all but one of the remaining paintings focus on flora – with no separation between the viewer and nature. And since Kerl tends to favor large canvases – 5 feet by 6 feet, 8 feet by 6 feet – he can have you feeling like you're in a garden. All the attention he pays toward sunset shades in the sky-focused works – the pinks and purples and blues – are turned here to greenery: emerald, celery, avocado, mint, viridian, jade, pickle, olive, chartreuse, sea foam, lime. But rather than the soft transitions of his sunset colors, the varied greens are contained in discrete shapes – flattened versions of their three-dimensional shadings in nature. As a result, they don't convey the lushness and vitality that a more naturalistic rendering might – as Kerl does in one painting here of flowers in bloom, Watching My Garden Grow All by Myself – but they do create this enormous and vivid interlocking web of life. The plants' relationships are no longer defined by depth; visually, they're all on the same level, pieces of nature connected through shape and color into one great whole.

This can be seen even more clearly in Morning Glory, the one work that Kerl has completely leeched of color. It shows what appears to be a wall covered in flowers, leaves, and vines. (The tip-off is a small section of bricks peeking out in one spot.) Across this white expanse are some recognizable shapes – elephant ears, philodendrons, ivy leaves, and, of course, morning glories – as well as what look like lots of random squiggles, circles, and blobs. Everything just sits there together in one giant mass, and it's lovely to look at, rather like Earth when you see it photographed from so high up that humans and their creations aren't visible. It's all of life on one plane in shapes and colors.

Which is pretty much where "Balm" leaves us. The last work is Lily and Ollie Map the Cosmos, Kerl's blown-up painting of a sheet of notebook paper on which the titular kids have pasted stickers showing planets, moons, comets, and suns, and then scribbled over with pens. It's a charming tribute to children's creativity, made more so by the faithfulness in its rendering. But it also takes us up and out to see the biggest garden of all, the one everything everywhere is part of. From this vantage point, we can see the connections of shapes and colors, the great whole. And as Lily and Ollie map it out, we're all on the same page. That's a unifying vision, and something to take solace in.

A version of this article appeared in print on June 18, 2021 with the headline: Skies and Gardens 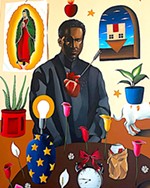 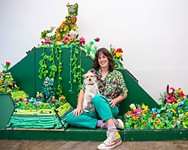