Overlooked, Overheard Lets Us Hear the Sound of the City's Money Being Spent 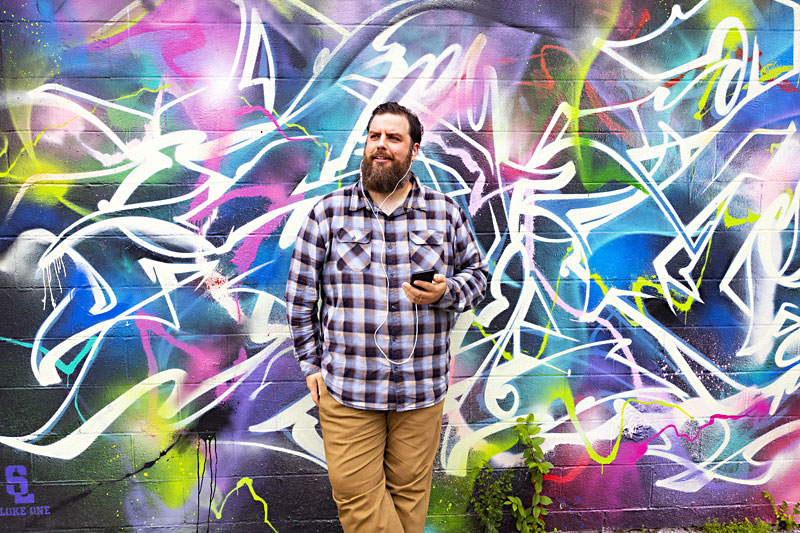 Your tax dollars at work: What do they sound like? All the myriad tasks of maintenance and improvement to our city's evolving infrastructure, to the steady flow of systems that allow the growing urban hub of Austin, Texas, to function as well as it usually does: Can we still hear them after the work's been completed?

At least, we can hear much of what's happened in recent history, in the name of municipal upkeep, in two far-flung neighborhoods along Airport Boulevard: Highland and Govalle. Thanks to the Overlooked, Overheard project of local composer and audio artist Douglas Laustsen, we can hear markers that indicate what the local government's been doing, in those two places, with the money we've given them – and we can hear those created sounds in the exact place where those activities occurred.

This revelation, as you might imagine, involves a smartphone app. The app is called Echoes; it's a system of geotagging whose originators encourage anyone to "create stereo, binaural, 3-D audio and ambisonic soundwalks." It's yet another of the possibilities for human engagement wrought by the sort of we're-already-in-the-future tech wizardry that brought Pokémon so delightfully into the real world in 2016. 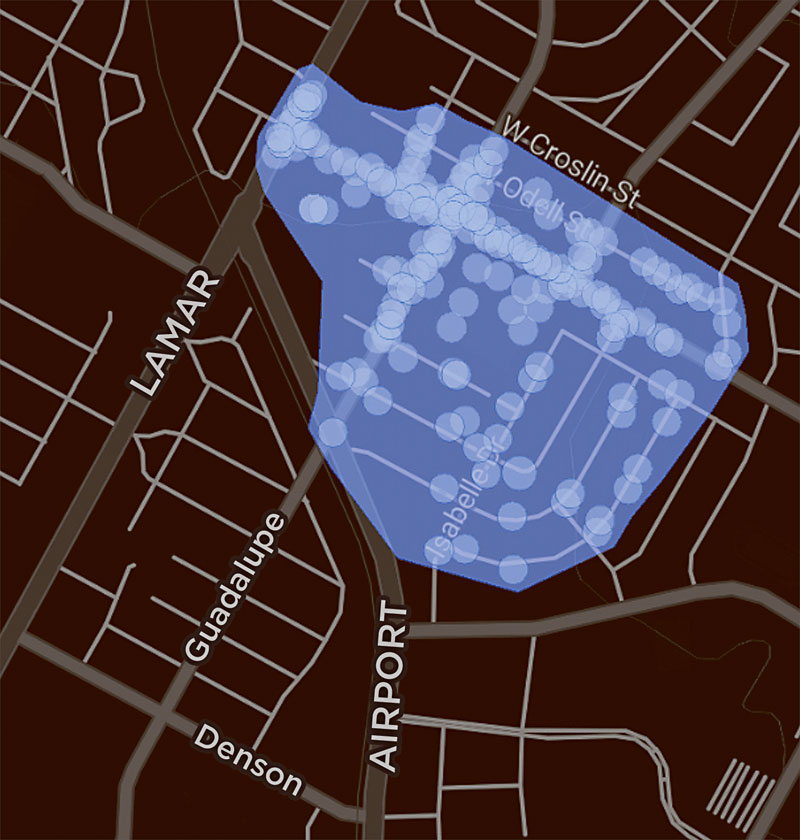 Echoes for a Highland Fling: The map’s in the app, where the sounds are gonna slap

Laustsen took the 2019 data for the Highland neighborhood and the Govalle neighborhood and generated dozens upon dozens of geotagged sounds to reflect the city-funded activities that had occurred in those locations.

But why would this Laustsen – whose previous project, Wires, was a choose-your-own fictional narrative presented as a set of handmade books (each of which contained a small speaker and audio player) – why would an arts-loving, music-teaching, poetry-promoting fellow like Laustsen decide that the bureaucratic dispersal of city funds was what needed exploration?

"Like with all great art," the thirtysomething composer says, "I was arguing with someone on Nextdoor." He pauses a beat in the Highland neighborhood coffee shop, takes a sip of his Kick Butt beverage, scratches at the side of his thick brown beard. "This was back around the November elections, and someone was talking about the transit bond. I don't think they were being a troll about it – they weren't being deliberately like, 'I don't get it! Where is my money going?' – they just literally couldn't understand what all their taxes were being spent on. They were like, 'Hey, I go to the library, I get some books there – and that's the only thing I can see that my money is going to.' And I disengaged pretty quickly, because you're not really going to change anyone's opinion over the internet. But it shocked me that it is hard to point to all the things that this city is doing on a day-to-day basis, these sort of maintaining projects that just make it a place we can live in. And that got me thinking about all the different work that goes into it. I'd done some other data-related projects in the past, and I knew that the city has an open data portal where you can look up exactly what they did. So I went to do that."

The thing about looking into the abyss, though, is that the abyss just never seems to fucking stop.

"It's a huge waterfall of information," says Laustsen, nodding. "The data is really hard to make sense of at first, but I started poking around and looking at the different projects, and I recognized that they were all located, of course, in different places. So that you could, in theory, walk to a corner and say, 'On October 22nd, they filled a pothole here,' or 'Over there, someone chased down a runaway dog in April,' and so on. And it's all documented online."

So Laustsen took the 2019 data for the Highland neighborhood and the Govalle neighborhood (where his studio is) and generated dozens upon dozens of geotagged sounds to reflect the city-funded activities that had occurred in those physical locations. "I take lots of walks around my studio, so I feel I kind of know that area, too," he says. "They're different neighborhoods, but both are walkable; it felt like a good compare-and-contrast if anyone wanted to immerse themselves in the subtle differences between them. And the sounds – I'm creating all of the data-driven, site-specific music in a wonky program called SuperCollider, so it's actually code. Instead of walking over and hitting a piano key, you tell it, like, 'For second number two, play this sound using this instrument.' And you also design the instruments – which helps, because some elements of the data are also worked into that. Like, how in or out of tune is the virtual piano that's making the sounds? Well, depending on what day the work was done, it's this much out of tune. Or what time of day the work was done will be reflected in how long it takes for the notes to get loud." 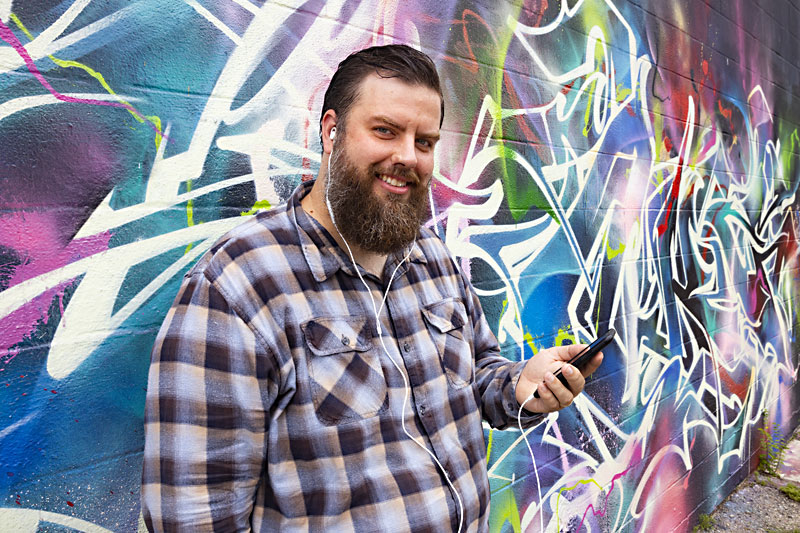 And what lies between these sonic manifestations of specific data? Silence? Whatever ambient city noise can filter through a person's earbuds? Laustsen shakes his head. "I asked some friends of mine to send me music on instruments they play," he says, "so I've got contributions from Casie Luong, Seetha Shivaswamy, Henna Chou, and others who live or work in the two neighborhoods. I sent them the data files, so they were composing or improvising along with those, and I'm going to weave the music in. It's not tagged to any location – it's gonna be a long, stretch drone, just to provide an additional level of variety to the experience."

The Overlooked, Overheard project is already up and running. "You can open the Echoes app now," says Laustsen, "and it comes up on a map display. Go to either neighborhood and walk around – it works according to your own pace and where you go, with the sounds varying from one area to another."

(Pro tip from the maestro: Download the app before you exit your house's Wi-Fi. You can stream it, but if you have data caps, you should download it in advance.)

Of course, no one has to enjoy this clever, tech-abetted ramble alone. You might've already considered taking a friend or five along, sure, but listen: Laustsen is leading two guided morning walks from 10am until noon: in Govalle on Sat., June 12, and in Highland on Sat., June 19. "I'll be going where I know the sounds vary to a certain degree," says the composer, "and where the streets have sidewalks, and they have curb cuts – all of that accessibility. This is all free, but I'll be making an ask for anyone who participates on the walk, 'Hey, if you like this, toss me a dollar or two?'"

Yes, Douglas Laustsen's Overlooked, Overheard can afford to be free, because – here's the kicker – the project itself was partially funded by the city of Austin's Cultural Arts Division. The painstaking process of winnowing data, of generating and geotagging sounds to indicate where some of the city's tax revenue went to ... was paid for by some of the city's tax revenue.

Good idea to watch your sonic step, citizen, and mind you don't trip over the municipal meta-feedback.

A version of this article appeared in print on June 11, 2021 with the headline: An Unquiet and Funded Place