Book Review: Far From Respectable: Dave Hickey and His Art by Daniel Oppenheimer

In this new book, the iconoclastic art critic gets the respect he deserves 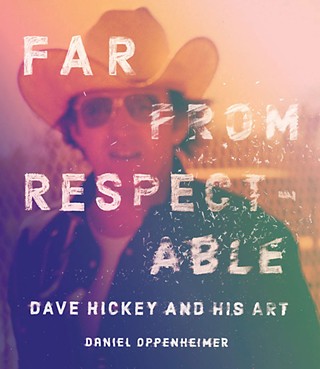 "Home, in the twentieth century, is less where your heart is, than where you understand the sons-of-bitches," cultural oracle Dave Hickey once wrote. The Texas-born, New York-adjacent, Nashville-infused (and eventually, Vegas-bound) art critic has a knack for succinct epiphanies.

In Daniel Oppenheimer's new book, Far From Respectable: Dave Hickey and His Art, we get an up-close portrait of the man by stepping back, learning of his difficult coming-of-age, his poly-incarnations (linguist, gallerist, lyricist) and his misplaced artistry: As the title suggests, Hickey's expert ability to write about art, is art.

His on-the-money insights about the kitschy wonder of America and its shape-shifting pleasure center, alongside excerpts on the role of beauty in our culture, make for a pedagogical page-turner. You need not be a critic or a connoisseur (it doesn't hurt), but a cartographer. According to Oppenheimer, Hickey is just that, charting the "many sociological traps and cul-de-sacs that can get in the way of creating or participating in such communities and conversations."

Oppenheimer poses two fundamental questions at the beginning of the book: Is Hickey's writing worth our time, and is he relevant right now? Up until 2015, he notes, Hickey had been working on a collection of essays titled Pagan America – not in a robed, Druidic sense, but more of a cosmopolitan, commercialized garb. A secularist belief system worshiping the deities of art, entertainment, fashion, and sports – all for the buying and selling of beauty.

We learn that the idea for Pagan America came about at a moment when the Left appeared to be winning the War on Culture – loudly festering by the early 1990s. Andres Serrano's Piss Christ (just as it sounds) threatened to slash funding from the National Endowment of the Arts, while Robert Mapplethorpe's sadomasochistic homoerotic photography won an obscenity court case in Cincinnati, to the vehement dismay of Christian conservatives.

But that was all before 9/11. Though Oppenheimer doesn't explicitly spell it out, anyone keeping count will infer that what happened in September 2001 spun democracy out onto a different trajectory – along with Hickey's percolating thesis for Pagan America. The author intertwines Hickey's writings with that cultural timeline in a well-balanced manner to read as part biopic, part critique.

Hickey was raised in post-World War II suburbia by two would-be artists trapped by their fate in Fort Worth. The loneliness of his childhood rendered him stateless and, as a result, exceedingly generous: a critic unperturbed by high-low binaries, nonacademic luminaries, and cowboy-Caravaggio hybrids. Hickey doesn't care to assign roles to anyone, especially himself, in the passion play of American cultural politics, Oppenheimer observes. "He knows better than most that we are all struggling, self-sabotaging creatures."

In fact, Hickey seems to stay above the fray altogether by refusing to identify as anything other than a key witness to the American 20th (and 21st) century. A Texan who went in search of real-deal beauty wherever he could find it – from Outlaw Country bars to late-night Tribeca lofts – before his pilgrimage brought him west to the spiritual homeland of Las Vegas, for a tenured teaching gig at UNLV.

Always, always raging against the "blob," as it is called in the book: the curators, academics, museum boards, funding institutions – the patriarchy – against the "wiles and seductions" of the feminine creative force.

Oppenheimer gives us the ups and downs of Hickey's personal life – the drugs, the divorce, the eventual comeback – that paved the way for his two essay collections, The Invisible Dragon and Air Guitar. Each are analyzed as equally brilliant but distally different, and woven accordingly throughout. One or both will end up in your Amazon cart when all is said and done. Toward the end, Oppenheimer describes meeting his hero Dave, now past 80, living in Santa Fe for the last decade, in a house he and his second wife (the art historian Libby Lumpkin) have yet to unpack. It is a tender account, both on the subject of Hickey and on Oppenheimer himself, who slips fully into first person to grapple with his own insecurities and origins.

All in all, Oppenheimer has written a poetic distillation of Hickey's art in America, the broken cowboy, and the cowering broker. There are a few esoteric moments – a Princeton professor's pedantic assessment of Hickey's writing, for instance. But that's because Hickey, remarkably, can roll around in the mud before dusting off his elbow patches and enchanting the snoot circles of the Ivy League.

In going back to the author's initial two questions: Is Dave Hickey worth the hype, and should anyone give a hoot? Far From Respect­able, like the wandering iconoclast it follows, deserves nothing but respect.

Far From Respectable: Dave Hickey and His Art

A version of this article appeared in print on May 28, 2021 with the headline: Raging Against the Blob