Five Graphic Novels That Will Supercharge Your Sequential Existence

A smattering of comics to keep your clever eyes busy 
I could gloss this just-released book by saying "The frequent New Yorker cartoonist and longtime sequential artist Karl Stevens provides a biography, equally quotidian and phantasmagorical, of his and his wife's pet cat." But that would be like horking up a hairball that only hints at the rich and fur-infused feast from which such an encapsulation erupted. What Stevens has performed here is, in fact, a sort of miracle. Not because the page after page of full-color illustrations in this new trade paperback from Chronicle Books are extraordinary, the man's meticulous pen-and-watercolor work so precise as to approach, at times, photorealism ... not because presenting the inner life of a domestic varmint in its own words is a novel conceit (cf. William Braden's Henri, le Chat Noir or, FFS, Garfield) ... not because Penny could double as an accurate glimpse of Contemporary (Pet-Involved) Life in America ... but because, moreso than even B. Kliban or T.S. Eliot or Edward Gorey or Rita Mae Brown accomplished, Stevens' paneled narrative of depictions here provokes the sensation of actually having a pet cat. I mean, it's a fucking eerie feeling. The artist renders such visual and textual verisimilitude, perfectly capturing the typical feline temerity of thoughts and actions, the catty Zen of its subsidized existence, that I could almost feel hair being shed on my jeans as I read. Bonus: Having this paper Penny in your house requires no cleaning of a litter box. 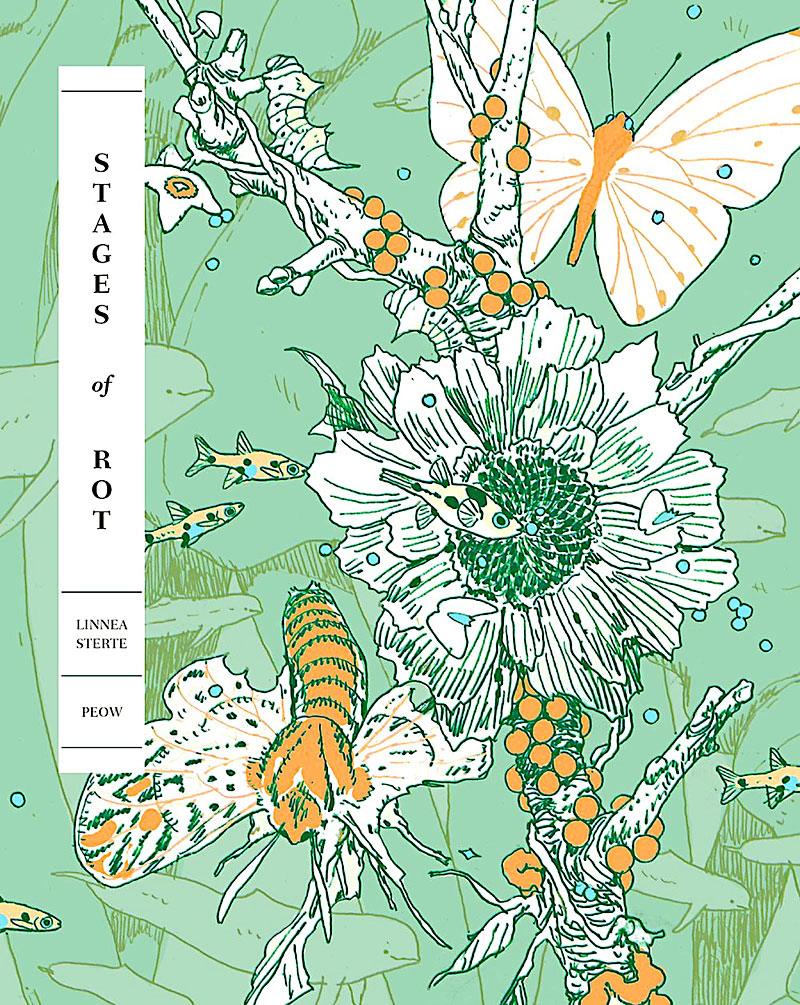 
Listen: "An alien desert comes to life around the body of a dying whale. Animals, insects, and ancient peoples scramble for her remains and make their homes among her bones, struggling through a millennia-long process of decay." This graphic album from Sweden's Linnea Sterte – she with a naturalist's eye and a formidable control of line – is a multipartite tale of transformation that's as trippy as it is exquisitely beautiful. This Stages of Rot is reminiscent of René Laloux and Roland Topor's Fantastic Planet (especially if that mindblowing film were to be reworked by the ghosts of Moebius and Arthur Rackham), if that helps you imagine the contents, but Sterte's world building and fascinations here are wholly her own. You may have missed this book in its 2017 debut, with its French-flapped, spot-varnished cover, and its complex interiors just as elegant via a muted palette of hues and shadows; I'm recommending that you find a copy wherever you can. Hint: The second edition's out and includes a bonus story, "Blood Caudex." 
In which your Black friend, Ben Passmore, tells you a few things he thinks you should know about race and racism and friendship and alienation. Unlike the other, bigger books in this list, Your Black Friend is a short, digest-sized (and elegantly produced) zine of a thing, expressing a powerful message via a compelling graphic punch, with information that is so relevant and so well-related that I bought five copies to pass out to, well, to various white people. The brief action in the comic, such as it is, is set in a neighborhood coffee shop; the words and pictures themselves are as tasty and invigorating as a good cup of joe – and may serve to wake you up just a little bit more. 
This is the Eisner-winning story of a student traveling around Europe and "figuring out radical politics in a messy world full of contradictions." This is Sophie Yanow's time abroad as a young college student, rendered in her black-and-white simple-line style (think Hergé and you won't be disappointed) and redolent of what life is actually like when you're that age and doing those things: funny, dull, revelatory, problematic, and interwoven with the lives of comfortingly similar or unnervingly different fellow travelers. "In the time after the psychedelics and the critical theory and the breakup, I had dropped most of my classes." Remember how Karl Stevens' Penny, noted above, can give you the feeling of actually owning a cat? The Contradictions, a delight of roadtrippery remembered, may leave you feeling like you've just hitchhiked through Europe with a new friend. 
Here's a new hardcover collection of short works from the acclaimed, cutting-edge comix stylist and deft explorer of human emotions Michael DeForge. Somebody somewhere has – OK, several people in many places have – called this guy a genius, right? It's not difficult to concur. DeForge is committing narratives that flow with madcap logic, his rendition of human relationships (with themselves, with objects, with the sheer fact of existence) as deep and familiar as his gambits of illustration are wildly inventive, his wildly inventive gambits of reality and illustration as outrageous as they are (in the context of each piece) perfectly sensible: How the hell else would someone draw such a story? But who the hell else but this DeForge would come up with it in the first place? Like, it turns out that heaven is where "Everyone in the silver tier gets to fuck Nora's husband." WHUT? But, yes, we should all be so worthy; and experiencing this book is, I'll suggest, a step toward that juicy goal.