In Buda, Mini-Golf and War Memorial Are Ingeniously Paired 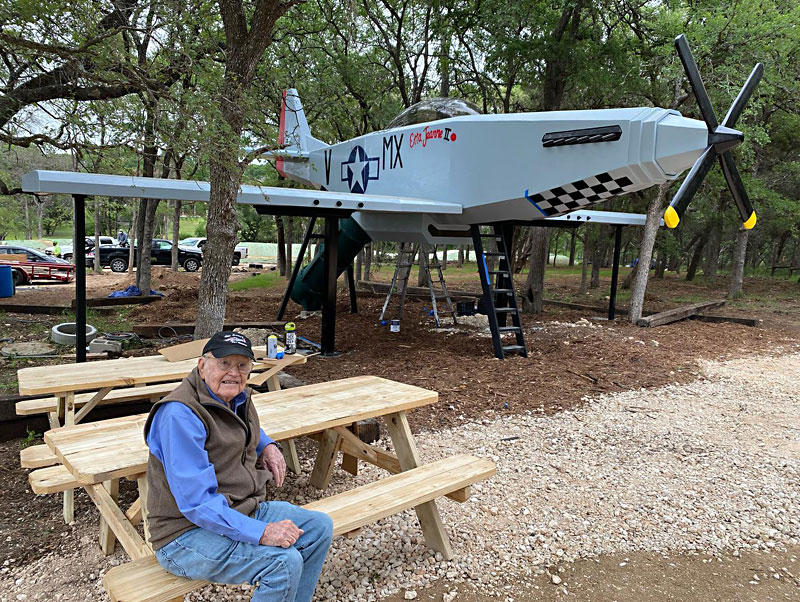 In the fall of 1944, Lt. Col. Huie Lamb Jr. flew a P-51 jet over the city of Hamburg, eyeing the clouds for German Me 262s. He nicknamed his plane the Etta Jeane, named after his little sister back in Texas, and stenciled it with red paint.

Seventy-seven years later, Lamb plans to take to the sky in another P-51 airplane, riding in the back seat rather than the cockpit. This time, at the age of 97, Lamb won't fly over enemy airspace, but the newly opened business of his friend Brian McKinney: an 18-hole miniature golf course built to honor World War II veterans.

What does mini-golf have to do with World War II? That's a good question.

It's an idea that came to McKinney in a dream in 2018. With the help of a small-business loan, McKinney brought his idea to life as the Memorial Miniature Golf and World War II Museum, an outdoor attraction for kids and families located in Buda. Historical placards outline the chronology of World War II along the course, and visitors wander through the museum on their way out. There's also a beer garden, smoked burgers from Cash Cow Burgers, and sno-cones from Bahama Bucks.

"Everything for everyone," McKinney said.

The museum is grassroots, supported by donations from partners and contributions from the community. "Friends are gifting us their fathers' and grandfathers' stuff," McKinney said. "Dog tags, bomber jackets, pictures to match the bomber jackets, uniforms, cool stories." Quarter-scale replicas of 1940s fighter jets with 120-inch wingspans hang from the museum's ceiling. 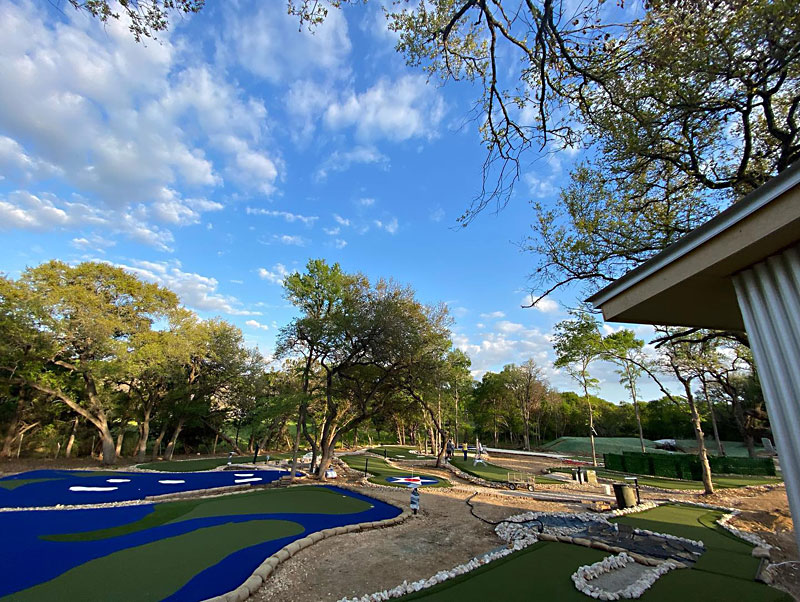 A look at the mini-golf course. (Courtesy of Memorial Miniature Golf and World War II Museum)

Outside, a full-scale replica of Lamb's P-51 plane functions as a playscape, built for kids to crawl on top of. The replica is painted exactly like Lamb's, down to the Etta Jean insignia. It's dedicated in his honor.

McKinney's grandfather served in the same unit as Lamb. The two connected through a Facebook group three years ago (introduced by Lamb's grandson) and they've been buddies ever since, spending time together about twice a month before the pandemic. "I call him my wingman," McKinney said.

For Lamb, seeing his friend's business open during a year marked by sacrifice offers a clear parallel to the 1940s. Those years were a testament to the value of working together with your neighbor toward a common goal, he says.

"During World War II, the whole nation got behind the effort," he said. "There was a shortage of gasoline, a shortage of food, and everybody had to participate in the rationing. Most people had someone they were kin to and loved that was involved in the war. It affected the whole nation."

That history lesson – whether taught through museum memorabilia, a mini-golf course, or his own celebratory flyover – is what Lamb hopes young people take away from visiting McKinney's property.

So far, it's working. "I had a group of teenagers from a magnet high school come through, really smart kids," McKinney said. "They read every hole together. It took them 2½ hours to play the course. That's the most rewarding part."

Even at 97, Lamb still likes to go flying. Thanks to a friend with a historic P-51 plane, Lamb can cruise over airfields north of Austin, taking in a bird's-eye view of the city. Although memories of the war are as fresh as they were 77 years ago, so is the hope for better days ahead.

His favorite part of flying? It's simple, he said: "Landing safely."

Seven Decades and One Wall Apart: Finding Friendship on Either Side of a Bouldin Creek Duplex
Two women at different stages of life keep company during a pandemic 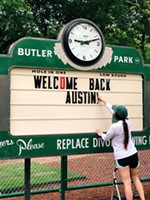 Seeking Nine Holes and a Lost Austin at Butler Pitch & Putt
A million dollar renovation transforms a city landmark, but the spirit stays the same