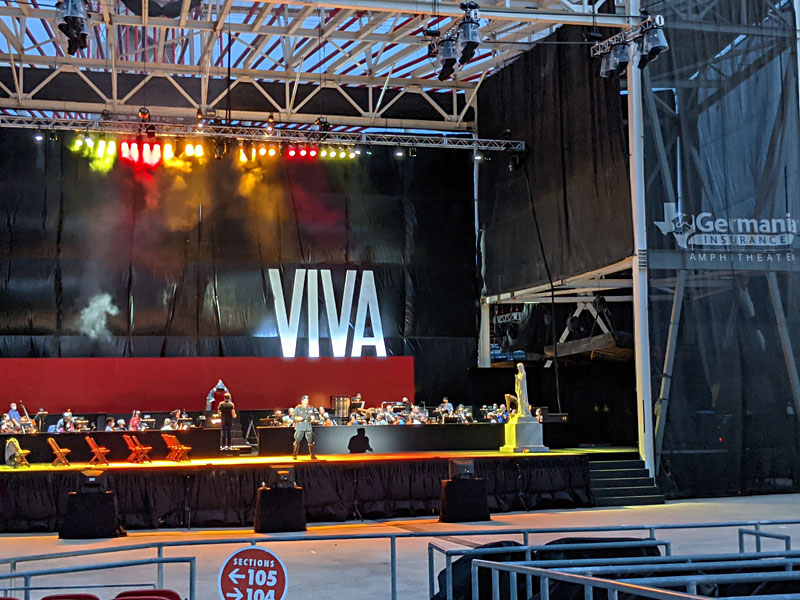 By the summer of 2020, Austin Opera knew that the first two productions of its 2020-21 season – Mozart's classic The Marriage of Figaro and Mason Bates' new American opera The (R)evolution of Steve Jobs – would be artistic victims of the pandemic. (Not to worry, both will be produced in 2021-22.) But when it came to the third production, Puccini's powerhouse Tosca, "we were stubborn," says AO general director and CEO Annie Burridge. "We were determined to find a way to do as much of the production as we could for as many people as we could."

Mind you, back in July no one really knew what would be happening with the coronavirus come April, when Tosca was scheduled to open, but, Burridge says, "We knew that vaccines were plausible by the spring and that outdoor activities were exponentially safer than indoor activities, so we were pretty tenacious in exploring ways for the show to be feasible." Opera staff compiled a list of outdoor venues – even ones still under construction – and in November, when conductor Timothy Myers flew into town, they visited the likeliest candidates. Most weren't large enough for a full-scale opera, much less one that would require social distancing for both artists and audience, but there was one that had all the room, plus a history of hosting large live performances: the Germania Insurance Amphitheater at Circuit of the Americas.

Appropriately enough for the venue, Burridge and company have been racing to get their Tosca up and running by the April 29 finish line. (Two performances are scheduled: Thu., April 29, and Sat., May 1.) Negotiating the arrangement with COTA took until February, and more time was needed to work out the safest ways to rehearse and perform the show. Fortunately for AO, the team at the amphitheatre, headed by General Manager Glynn Wedgewood, was quite generous and went to "extraordinary lengths," Burridge says, to make the show work out there. And to oversee all of the safety protocols based on recommendations by health experts, the company was able to secure the services of "Kathryn Grumley, a soprano and ER nurse who has been working on the front lines of COVID around the country."

Not everything has been so cooperative, however. The weather has thrown a few extra hairpin turns into the Tosca track. For safety's sake, the decision was made to hold all rehearsals outdoors, under a tent set up for just that purpose in AO's rehearsal studio parking lot. While this was "ideal in theory," Burridge says, the reality has been weeks of dealing with rain, damaging winds, and temperatures that ranged from a frosty 48 degrees to a roasting 90. As if that weren't punishment enough, just a week before opening, the severe weather hammered the Tosca set that had been erected on the amphitheatre stage. Not that disaster deterred Austin Opera. As stubborn about Tosca as it had been for a year, the company simply "rebuilt it and soldiered on."

And this weekend, the company will welcome a socially distanced audience – with every other row empty and two empty seats between groups – and treat them to the grand tragedy of the singer Tosca under the stars of Austin's night sky. Burridge notes that this isn't just another production for her company. Their artists, musicians, crew, and staff do their best with every opera they mount, but in this case, they have a special reason to be thrilled and to give their all: "For many of them, this is their first job in a year." Keeping in mind the many trials faced by creatives during the pandemic, she sees their commitment and perseverance with Tosca as something bigger than just Austin Opera. "This production is a testament to the incredible resiliency of the arts sector."

A version of this article appeared in print on April 30, 2021 with the headline: Go, Tosca, Go!