Local interest in fiber arts is growing rapidly as people find stitching is a way to calm nerves, find friends, and make political statements during the pandemic 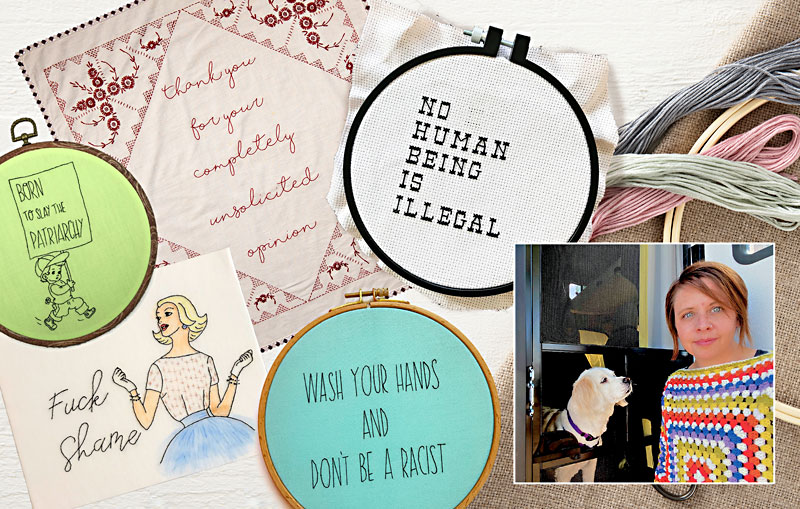 My grandmother taught me how to stitch when I was about 6 years old, but I didn't pick up a hoop again until some 30 years later when pandemic-related struggles forced my hand. In the quest for stress and anxiety relief via needle and thread, I found not only a path to soothed nerves but also a tool perfectly designed for incorporating more art and community into my life. So it happens for many other embroiderists, and the stitching community – one poised to use art as a medium for change – is growing rapidly online.

Shannon Downey of Badass Cross Stitch (a blue checkmark-verified Instagram account with over 152K followers) also started her stitching journey in elementary school and returned as an adult. The assignment – an unfortunate pink bunny with blue eyes – still hangs in her parents' home, but she didn't stitch again for 20 years. When she came across a Captain Picard pattern on Etsy ("Everything good in my life has always come back to Star Trek"), Downey understood that while the medium actually did speak to her, most embroidery content thus far had turned her off.

So, after nearly a decade working in digital marketing, Downey says, "I started making every day as a way to create some digital-analog balance in my life, and quickly moved away from stitching sunny Star Trek patterns to making my own work and using it as a tool to make space to think substantively about things I was working on in real life."

One of her first pieces that gained significant attention was a gun. "I had a bullet come through my window while I was sleeping," says Downey, "and I was around victims of gun violence a lot through some of the work I was doing, and it was around the time of a lot of mass shootings. One day I logged how many times I heard, said, read, encountered the word 'gun' in one day, and it was 72 times. That night I stitched a gun just as a way to connect to this object that I've never even held." She shared it alongside some reflections, and then answered the calls to create a pattern. When people started tagging her in hundreds of fabric guns – not the direction she was aiming at – she asked folks to send her the stitched pieces. When she'd received some 200, Downey partnered with a nonprofit in her chosen hometown of Chicago: Project Fire, which works with young people who've been victims of gun violence to learn glass blowing as art therapy and entrepreneurial skills. The coordinated art show raised $5,000 to fund the next semester, but it also lit a fire in Downey.

"I realized [embroidery] can be a tool for actual impact in outcomes. We can have an impact on issues that we care about. We can help support change through craft."

Eventually, Downey says, "People started to give me the identity of craftivist. I loved the word, but I didn't feel like I was in alignment with the philosophy around the word craftivist at the time. I was interested in [embroidery] as a mechanism for community organizing and for tangible outcomes." 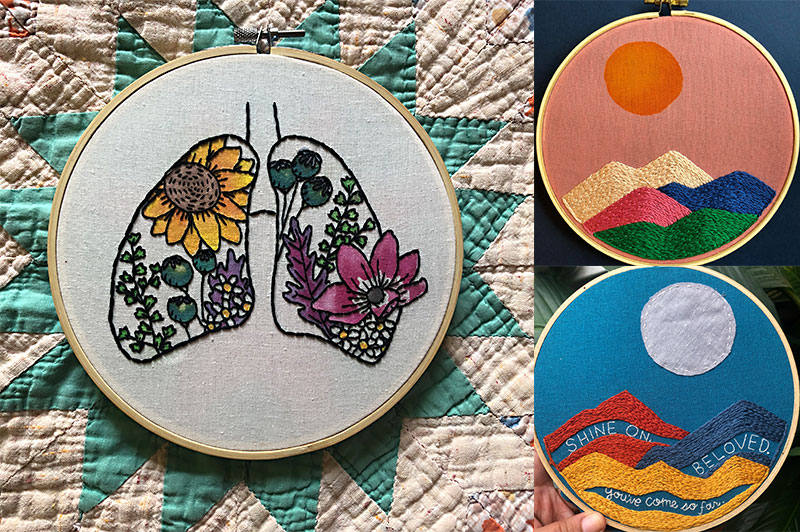 To date, Downey can track about 100,000 people she's taught to embroider. Her goal – one she admits is somewhat arbitrary – is to teach 1 million. "I started to think through 'What is significant enough to have a massive impact?' I know that in teaching people how to do this I see them change. A million people might be enough to feel like I did something in the world." Through in-person lessons, Zoom and video workshops, and work with libraries and art houses, Downey persists in her mission, one city at a time. Recently, her nationwide project called Rita's Quilt was showcased for three months at the Neill-Cochran House Museum, where she also hosted several "stitch-ups," as she calls them.

“I realized [embroidery] can be a tool for actual impact in outcomes. We can have an impact on issues that we care about. We can help support change through craft.”— Shannon Downey

"Austin's been good to me," says Downey. But after a four-month stint here (including the winter storm in which she and her dog Maggie were rescued from certain death by local strangers-turned-friends), she is back on the road, traveling across the country in her RV, on her way to rally those remaining 900,000 would-be artists.

Community building through embroidery is something that local artist Sarah Patterson of Mountains of Thread vibes with as well. She found her embroidery groove after a craft book came across the buy counter at the North Lamar Half Price Books where she was working. Skip ahead seven years, and she turned her craft into a DIY-kit business to support herself and her children. "I think art of any kind just naturally brings people together," Patterson says. "In my workshops, it'd be about 10 people or so who had never met each other before suddenly bonding and sharing stories, swapping phone numbers or emails. Embroidery is definitely a way to use your voice, too. It doesn't just have to be pretty flowers or cactus you're stitching. There are some really great artists out there who are using their art to amplify their voices, and it's amazing. Femme Broidery is a great one. There's also a lot of ways to use embroidery in sustainable ways. Jessica Marquez of Miniature Rhino has a great book on using embroidery to mend clothes."

Once you dig into the embroidery Insta­gram community, it becomes clear that fiber and textile artists are not in competition with each other; rather, they're embracing both the camaraderie and countless hidden perks of making art. Patterson says, "I can go on and on about the therapeutic benefits of embroidery – they're endless. Embroidery takes time [and] it really forces you to slow down, but in the best way. Anytime I find myself overwhelmed, I make sure I'm carving myself time to sit down later and stitch. It doesn't have to be a design. Even if you're just stitching [lines] and watching Netflix, you're still being intentional with your hands and getting those benefits."

Erin Guevara-Inman, an Austin embroiderist who stitches custom work under the handle Blue Ink Moon, agrees: "I have always been an artist that was mediocre in several different mediums, but never homed in on one until I tried embroidery. [It] has been so vital to my mental health! I have struggled with both depression and anxiety since my teens – art has been a great outlet and coping mechanism for me my whole life. Specifically during the pandemic, creating hoops gives me a sense of grounding. Having something to start and finish has been so good for my soul! Not to mention the connections I have with other makers over social media – it is such an encouraging community to be part of. Even with physical distance, I've still been able to journey through this creative process with other artists in Austin and beyond."

It's also the accessibility that Patterson, Guevara-Inman, and Downey all cherish. For a few dollars and maybe an hour of instruction, beginners can test it out, perhaps finding comfort simply in the artistic endeavor itself. And because embroidery as a medium is built not on perfection but the actual act of creating, it bolsters confidence in both self and social movements. Says Downey, "I'm constantly reinforcing that you are an artist if you're making art."

An advocate for "radical skill sharing," Downey says, "So many people – particularly the 40+ women – that come to the workshops come saying, 'I'm not an artist. I can't draw. I hate my handwriting. This is very uncomfortable. I'm anxious.' I hear 'I'm scared' a lot – to try this new thing. And I'm like, 'Well that's because you're an adult and you've been taught your whole life to focus on the things you're good at, and to stay on that path.' We don't venture out and try new things, so now you're here in a room full of people and you're going to try something new? Of course you're afraid. 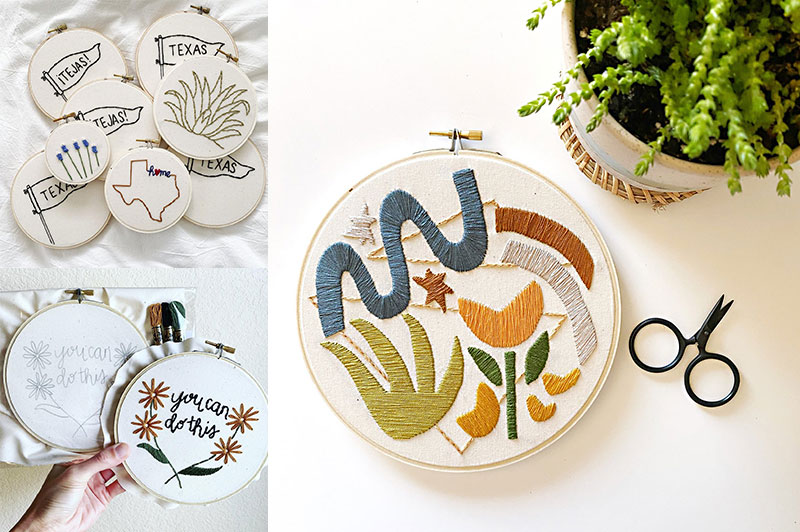 "We have to let go of these limitations that stop us from trying things. When you say, 'I'm not an artist,' that shuts you off to so many things because you think you can't do it. And what I'm telling you is: That's patriarchy, that's capitalism, that's access, right? You think that you can't paint with oils, that you're not an artist? What bullshit is that? It also comes down to access: Who can afford to fuck around with oil [paints]? It's ridiculous. We tell people, especially young people, that you either have this inherent talent or you're not an artist. Nothing could be further from the truth. You can develop these skill sets, so I'm constantly trying to help people reframe their capacities and capabilities and [examine] 'What fed you that?' It is absolutely capitalism and patriarchy that have set up these systems to make us believe that handicrafts or fiber arts are less than and that it's a hobby and not really art. Like, fuck off."

Up next for Downey's embroidery­-meets-activism is How to Be a Good Human, a series focused on training skills that help people feel prepared to take action. "I was listening to so many folks saying, 'I want to do something about that, but I don't know what to do.'" She partners with nonprofits and organizations like Asian Americans Advancing Chicago for installments aimed at actionable steps: bystander intervention in hate crimes, how to stop an overdose, how to develop mutual aid, how to unionize the workplace, how to set up a community closet, and get out the vote campaigns.

And, naturally, after each training, participants are invited to learn to stitch a custom badge. "That's how you get people engaged: It's not scary, it's fun. Embroidery? I got you."

Shannon Downey (@badasscrossstitch) is working on a book and will continue her “stitch-ups” across the nation and online.

Sarah Patterson (@mountainsofthread) is participating in the Luna Market in Elgin on Fri., April 23, 6-9pm, put on by @shecreatesunion.

Another measure of the local growth of the embroidery and stitching communities is the Austin School of Fiber Arts, a new nonprofit offering workshops and lectures on a full range of textile-related artistry, from weaving and fabric sculpture to dyeing and screen printing. Chronicle Arts Listings Editor Wayne Alan Brenner learned all about it from the school's founder, fiber artist Lynne Brotman, in a story posted online at austinchronicle.com.

A version of this article appeared in print on April 9, 2021 with the headline: Stitch by Stitch