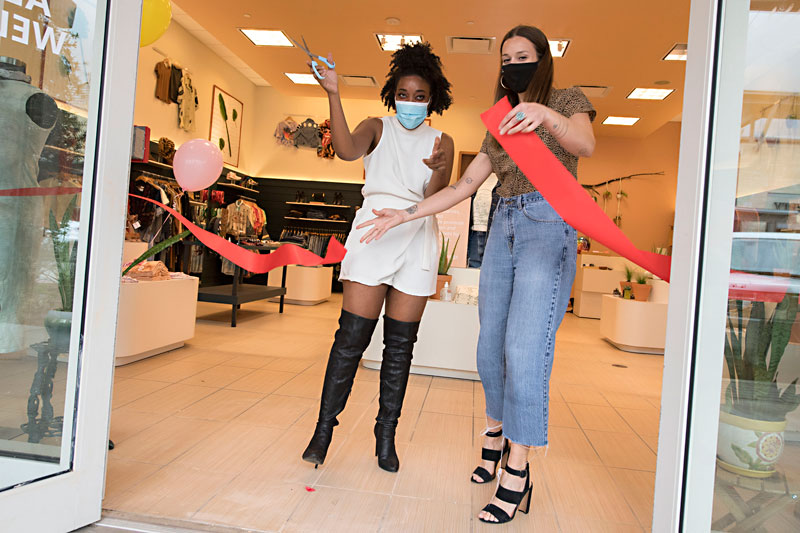 Dominique Kirven's love affair with thrifting began when she was 10 or 11. "Looking at the newspaper, going to people's garage sales with my grandma and my aunt, we would go into people's houses or garages or yards and find this crazy stuff," she says.

She's never lost the thrill of sifting through secondhand clothes, channeling it in different ways: at clothing swaps with friends or as a volunteer for Dress for Success and Goodwill, where she would style people – some of them just getting out of prison – for job interviews. She'd left a series of corporate jobs, unfulfilled. "I was sitting to myself and thinking, 'What do I like to do? What do I give myself to?'"

The answer came two years ago, when she started selling her thrift store finds at pop-ups. She began Thrifted Feels with one rack of clothing at Cosmic Coffee, and it took off like a rocket. "It became a business before I even knew it," Kirven recalls. Caitlan Lochridge of To the Moon invited Kirven to sell her clothes out of one of two buses she owned, and then to join a cooperative store with eight other women.

"I was there for a year and a half, and granted it was a beautiful experience," she says of the co-op. But it was a challenging one, too. In a "white-dominated space" largely selling fast fashion, she says, "I was the only woman of color just in my space trying to sell my little secondhand grandma clothes and giving it the energy it deserves. And then I just got tired."

She cites the Black Lives Matter movement as a turning point. "My Instagram went from 900 followers to 6,000 followers overnight, and I did not know what the fuck to do with all of that. There was a lot of white guilt following me." It was time to reassess again.

She started selling her clothes exclusively online. At the end of 2020, she left her job at Bumble and began hatching a plan to open her own storefront. That plan is now a reality, with the opening of Gather & Co. at the Hillside Galleria (12700 Hill Country Blvd. Ste. G-125) – another collaboration with Lochridge. One side of the store features Kirven's thrifted clothing, emphasizing her particular aesthetic: "very earthy and very 100% fabrics ... 100% wool, 100% cotton, silks, satin, etc." On the other side, Lochridge sells items from local artists, such as cards, art, and candles.

"You always have to have allies. I think it's important you have to recognize people that are supporting people of color, women of color, and I think my biggest supporter was Caitlan," says Kirven.

At a friends and family preview in early March, Lochridge explained their overarching mission.

"We're about sustainable fashion and being mindful about what you're purchasing, being mindful of the earth when you're making your purchases, and really just connecting to people," Lochridge said.

That idea of connection is baked into the name of the store – Gather & Co. – but that sense of community has not always been an easy one for Kirven to find in increasingly gentrified Austin. In a town "a little oversaturated with thrifts," she laments the way places like Treasure City Thrift – a community-oriented nonprofit – are getting pushed out of the Eastside in favor of "poshy vintage" shops. In 2019, she started a podcast called Thrifting Minds specifically to discuss gentrification, climate change, and other hot-button issues in thrifting. But for now, the focus is on getting Gather & Co. off the ground.

"I'm overwhelmed with how much I manifested this and now I'm like, 'Okay, I'm here, this is going to be my first year working for myself completely,'" says Kirven. "I told myself I'm going to dive into this, and I'm going to see where it takes me. Here I am!"