Conspirare's Quarantine Madrigals Creates a Choir of One 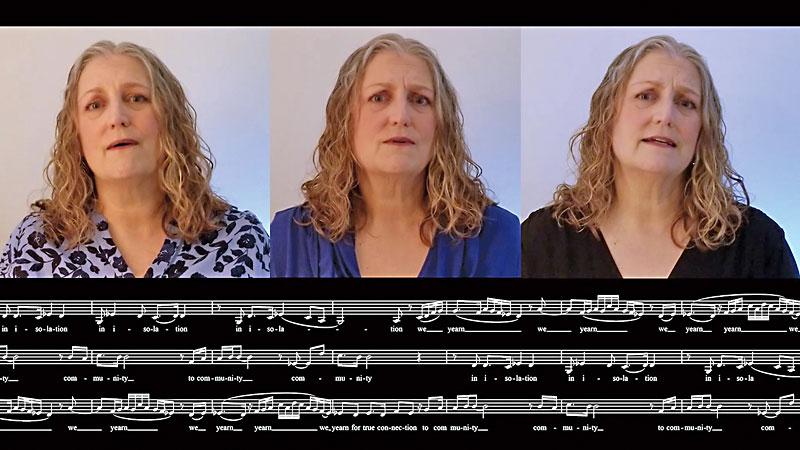 If the member of a choir sings when no one is around, is there a sound?

For many choral singers, that's become a real – and distressing – question this past year. If the reason you sing is to blend your voice with others, who are you without those other voices? Anyone?

The particular sense of loneliness and loss that choir members have felt during isolation is described in a new song cycle, Quarantine Madrigals, that Conspirare will premiere Monday, March 15. In eight pieces, composer Reena Esmail and poet Amy Fogerson trace the singer's emotional arc from first feeling the absence of community to the suffering of solitude to the hope of reunion. But that isn't the only thing that makes it special for choral singers. Esmail composed it specifically so an individual could record the different parts with a multi-track app and make a choir out of just themselves.

The idea came from Fogerson – also a member of the Los Angeles Master Chorale – who pitched it to Esmail last summer. The idea intrigued the composer enough that she asked Fogerson to provide a brief poem for the text. Fogerson gave her a haiku about isolation, and Esmail set it as a madrigal, a form using a solo voice for each part with no instrumental accompaniment. The result captured something distinctive about singers' longing for others in pandemic separation and yet was still universal. So the duo wrote another. And another. And another, and kept going until they had seven.

As this was happening, Conspirare Artistic Director Craig Hella Johnson was keeping his ear on the project. An admirer of Esmail's work for several years, he'd commissioned a piece from her for The Singing Guitar two years ago, and last spring, as the impact of COVID was beginning to be felt, he reached out "to see if we could commission her to create something for Conspirare singers, perhaps even something we could share with other singers around the country who were feeling such great loss at not being able to sing together." When Esmail let him know about the quarantine madrigals and asked if Conspirare might like to play a role in introducing them, Johnson "responded with an enthusiastic 'yes.'" Ultimately, he commissioned the entire work, asking for the addition of a postlude imagining the day when the choir reunites and voices join together once more.

For the premiere, all the madrigals will be performed by Conspirare singers in pre-recorded videos – but the versions shown this Monday won't be the only ones the singers made. Three versions of each madrigal were recorded: one by an individual singer with a low voice doing all the parts; one by an individual singer with a high voice doing all the parts; and one with different singers for the different parts. The point was to show the flexibility of the works and how they can be "performed," as well as their accessibility to every singer. To that end, Johnson had the Conspirare singers record their videos on their phones and largely left them to their own devices: "I wanted for each of the singers to go through the same process that any interested singer will go through in order to create their own versions – that is, they will do their setup and their performance alone, at home."

The various interpretations will be seen on the eight Mondays following the premiere. Each week will spotlight one madrigal, posting Conspirare recordings as well as recordings by other singers from around the world and versions uploaded to the Quarantine Madrigals Facebook page. That page also contains resources including scores, piano tracks, and a teaching guide for high school choirs. Esmail and Fogerson are hoping "to build a wonderful, supportive community of singers, so we all can feel connected to each other while we wait until we can sing together again."

Johnson, though, looks at the Quarantine Madrigals not just in terms of the present but also the future. "They are fascinating little pieces and completely an outgrowth of this COVID time we have all experienced," he says. "In addition to being living pieces for musicians to engage with, I feel they will also become extraordinary snapshots of this monumental time. This is art that is utterly of this time and in the future, they will provide glimpses into some of the many challenging and tender aspects of this historic pandemic."

A version of this article appeared in print on March 12, 2021 with the headline: Who Sings With Me