Artist Ender Martos Celebrates His Past, Present, and Future in "Veintiuno" 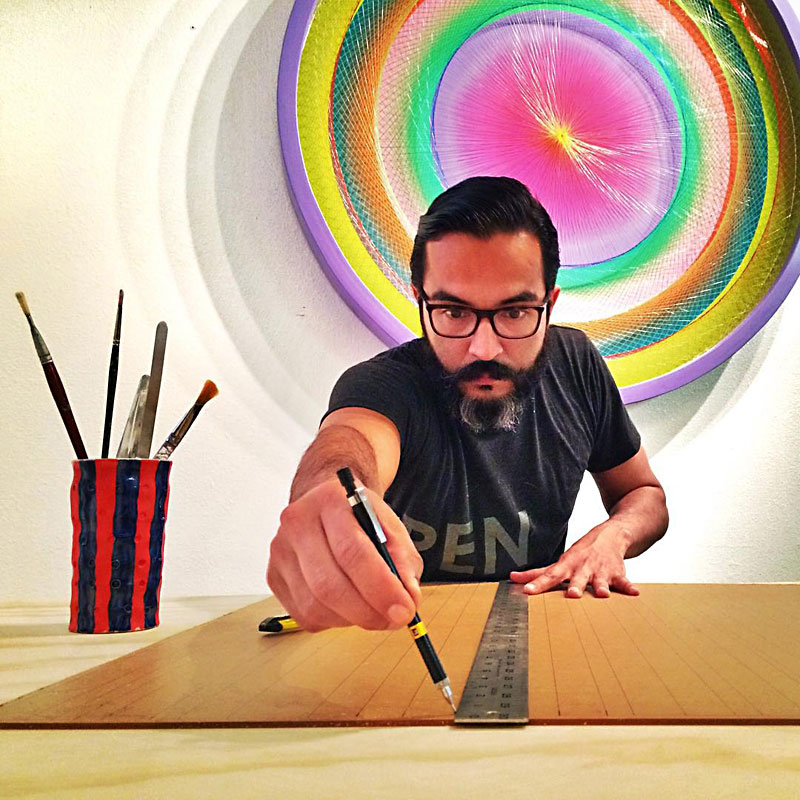 Well that, as it happens, marks the 21st year that artist Ender Martos has been living in Austin.

That, as it happens, was preceded by 21 years of him living in his native Venezuela.

Martos has taken advantage of this convergence of 21s to create a virtual exhibition that explores not only his artistic work, but also his life – and not only his life in the two 21-year spans he's enjoyed so far but also the life he aspires to live in the 21 years to come. Images of his work are accompanied by photographs of the artist as a child and a young man, videos of him in the present day at work and play in Austin, text and audio in which he shares his history and philosophies, and digital renderings of future works – it's art exhibit as biography.

"Veintiuno" – which opened on 2/01/21, naturally – is divided up as neatly as the ghostly visitations of Dickens' A Christmas Carol: Three "rooms" represent the past (Venezuela), the present (Austin), and the yet-to-come (TBD). In each, a brief video serves as an introduction to the selected works on view there and how the place and/or time influenced them. Below the art is extra curated content in the form of videos that provide more context for Martos' creative direction. 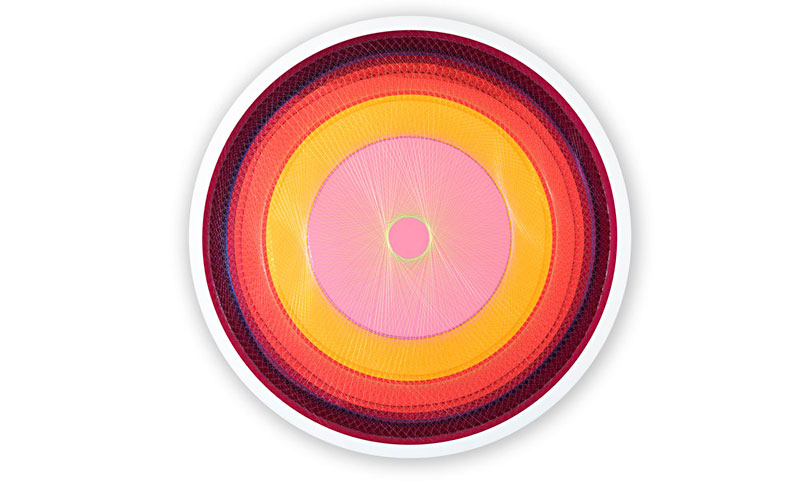 For those who know the artist just by his work – translucent monofilament lines strung in complex geometric patterns, like the psychedelic webs of spiders high on mescaline and mathematics – this background information may offer surprises. Where in those elegant abstracts does one see that Martos' "condition as an immigrant has always been a central theme in [his] work"? On the other hand, learning about the three Venezuelan artists who were the major influences on Martos reveals so much – you can see his vibrating colors in the murals of Carlos Cruz-Diez, his delicate lines in the sculptures of Gego, his kinetic energy in the work of Jesús Rafael Soto.

Ultimately, everything that's included in the exhibition has something illuminating to say. The lush videos of Venezuela in Room One, so full of natural grandeur that they might have been plucked from an IMAX travelogue, support Martos' contention that his homeland is "a true feast of colors and sensations that never, ever ends" and make it easy to believe that it inspired his study of light and its relationship to color and movement – what he says is "without a doubt my biggest obsession." And if that prompts one to wonder how he could abandon that place for Austin and remain here for two decades, he provides the answer in Room Two, crediting the city with pushing him to find his voice as an artist. Austin is always inspiring him, he adds, and he feels that in his 21 years here, he's lived 21 lifetimes.

Martos associates the number 21 with energy, and in “Veintiuno,” his art hums with it, even in virtual rooms.

And yet, although he's now lived in Texas even longer than he lived in Venezuela, he's still conscious of being an immigrant, an outsider. And as a result, he says, "Through my work, I am always asking myself, 'Who are you, Ender, and where do you come from? Who have you become?'" In the past, that could take the form of overt commentary, as in the series America Alienated, where he was photographed with his head fully covered in the mask of a green, bug-eyed extraterrestrial, albeit with a human mustache. In the present, it's more indirect; in his Reflections series, he's backed works with mirrored Plexiglas, so viewers can see themselves among the intricate latticework of monofilament lines. 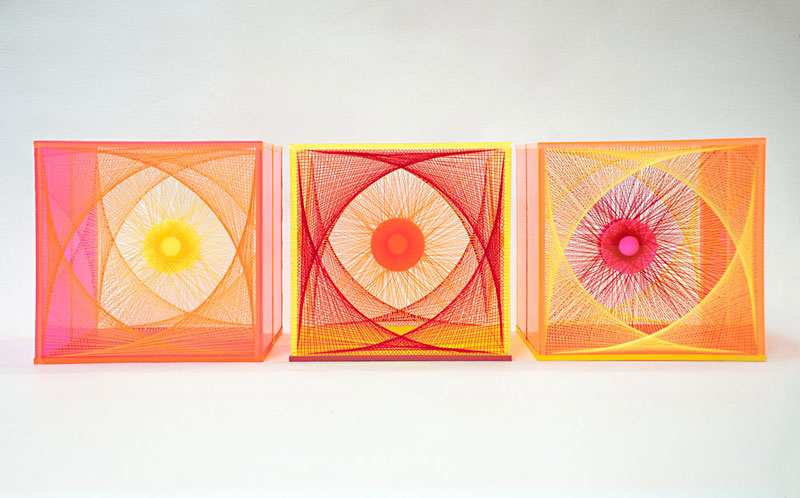 A few examples of the Reflections series are included in Room Two, but try as you might, you won't be able to see yourself caught in their neon-bright webs. The unfortunate aspect of "Veintiuno," as with any virtual art show, is that you aren't in the space with the art, and the full impact of the work is diminished by the separation of the screen. To be present with Martos' work is to have it shimmer and vibrate in front of you, your every movement causing a shift in the light that's passing through the translucent lines and making it appear the colors are as active as atoms. You miss the artist's realization of his "biggest obsession" and the op art legacy of Cruz-Diez and Soto. Still, the geometric interlacing of the lines is breathtaking, especially against the fluorescent hues. Martos associates the number 21 with energy, and in "Veintiuno," his art hums with it, even in virtual rooms. 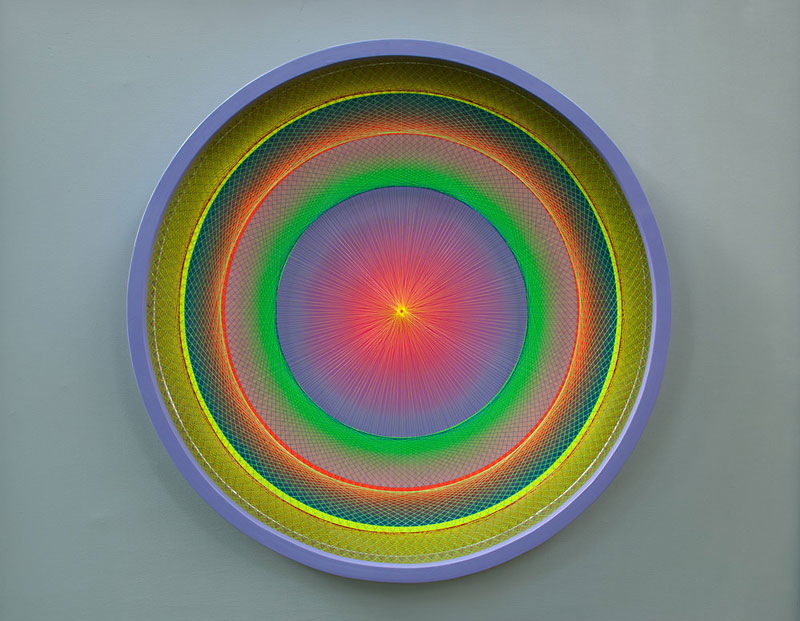 Martos also connects the number to hope, and Room Three is proof of that. Unlike Scrooge, the artist doesn't need a specter of death to frighten him into doing good. In the video, he reels off a list of positive resolutions for the coming 21 years: "to use any opportunity to celebrate life," "to stop taking nature for granted," "to make new friends and feel comfortable with anyone who thinks differently than me," "to create and never stop creating bigger and better projects that I can share with people in their communities." Along with them, he presents a few concept designs for such "bigger and better projects," works intended to activate large public spaces with color and beauty. But maybe more significantly, he notes that they were designed in collaboration with others, and he includes the faces of 21 fellow Venezuelan immigrants involved in the exhibition, people who, he says, are "part of a new diversity in the U.S." It suggests that the third chapter in Ender Martos' life may bring the first and second together, a fusion of Venezuela and Austin. That only makes numerical sense: 3 is the sum of 2 and 1.

“Veintiuno” is on view at www.veintiuno.art.

A version of this article appeared in print on March 5, 2021 with the headline: Artist Ender Martos Celebrates His Past, Present, and Future in “Veintiuno”