A pirate with ink in his veins 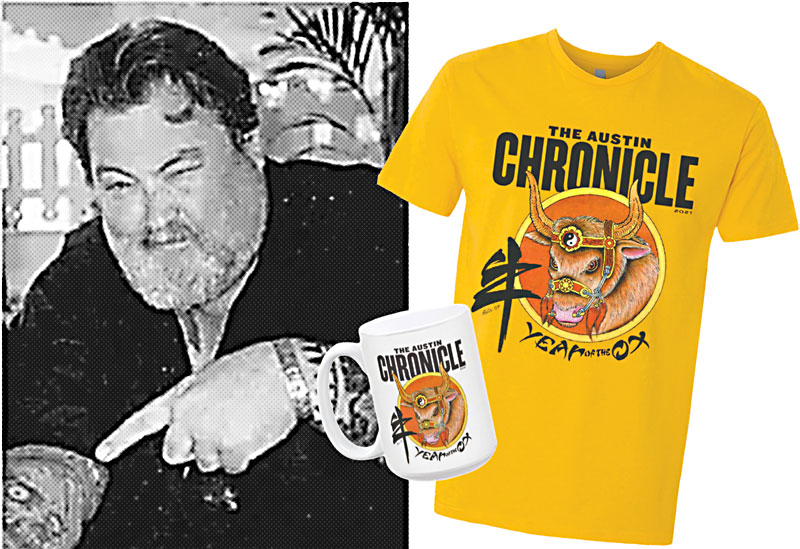 Michael Malone, better known by his nom de ink Rollo Banks, was a brilliant iconoclast and renowned tattoo artist whose mastery of the form earned international acclaim. As The Austin Chronicle's erstwhile cover guru, Banks created the Lunar New Year series, which appeared annually from 1985 through 1997. The Chronicle is proud to make this collection available to readers as a wearable tribute to our late friend, the inimitable Rollo Banks.

Michael Malone (1942-2007) was born in San Rafael, Calif., to blue-collar parents who encouraged their son's artistic interests. As a young man, he immersed himself in the Bay Area subculture, creating psychedelic lighting for San Francisco rock shows while studying carpentry and ceramics. In the late 1960s, he moved to Manhattan, where he began inking clients in his downtown apartment under the guidance of a local tattooist and, in 1971, helped organize a groundbreaking tattoo exhibition at the Museum of American Folk Art in New York. Adopting Rollo Banks as his nom de ink, he moved to Honolulu in the early Seventies to apprentice with the legendary Sailor Jerry Collins, inheriting Collins' tattoo shop after his mentor's death in 1973.

In 1984, Banks moved to Austin, where he opened the China Sea Tattoo parlor on Guadalupe. He quickly discovered kindred spirits at the nearby Austin Chronicle office, eventually marrying the late Margaret Moser, senior music writer and founder of the Austin Music Awards.

An inspired original, Banks is widely credited with helping transition tattoos from a maligned subculture of bikers, sailors, and ex-cons to a respected art form. As Moser once observed, "It's hard to remember when tattooing was a real underground art instead of the Hallmark greeting card it's become, but Rollo was part of the reason it went 'from the gutter to the curb,' as he always joked. He was one of the true visionaries of the art, a pirate with ink in his veins."

Known for his clean, powerful designs that blended iconic Asian and Western imagery, Banks was also noted for standardizing "flash" sheets – those 11-by-17-inch posters, now common in tattoo parlors, which display multiple images for the client's choice. Pre-Rollo, most tattooists hand-drew their own designs, with decidedly mixed results, but Banks' outstanding images, eventually totaling roughly 3,000, helped inspire and educate tattooists around the globe. An early proponent of traditional tribal tattooing, he also designed and pioneered the Rollomatic, considered one the finest custom tattoo machines.

Many of Banks' arresting images were collected in the 2002 book Bull's Eyes & Black Eyes: The Art of Michael Malone, which featured a lengthy interview with the artist, showcasing his self-deprecating wit and acerbic worldview. His work also earned a place in numerous exhibitions, including Chicago's Ann Nathan Gallery, the Honolulu Museum of Art, and the Old Dominion University Gallery in Virginia.

Still, Banks had no patience for self-glorification and routinely derided tattooists who, in his words, thought they were "building a monument to themselves." Though he didn't live to see his own laudatory obit in The New York Times, no one would have laughed harder to think the venerable Gray Lady would ever eulogize the likes of him.

Rollo Banks took his own life on April 17, 2007, at the age of 64 after years of painfully declining health ("Time to check out..." began the note he left). An outlaw to the end, he may have written his own epitaph in an interview with Tattoo Artist magazine shortly before his death. "Like this tattoo I did yesterday – it said 'Scalawag.' And I like that. It's part of who we are: scalawags."

Rollo Banks’ “Year of the Ox” design is now on sale in The Austin Chronicle’s online store at austinchronicle.com/store.