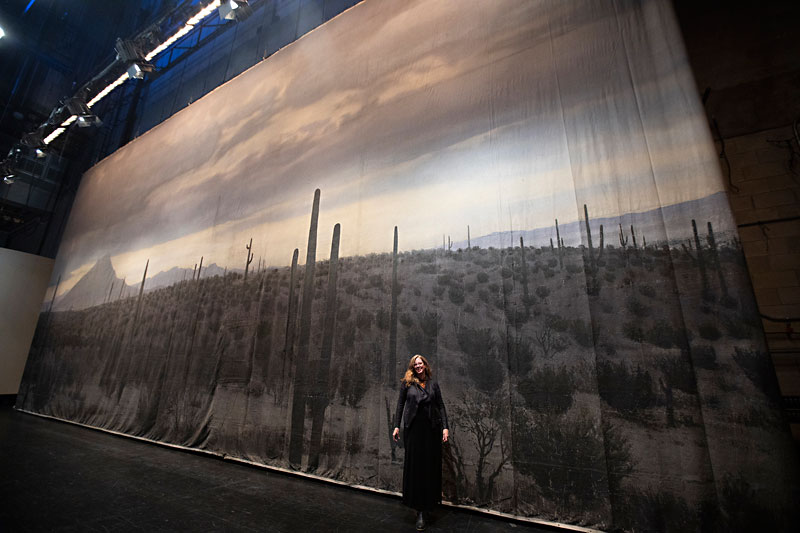 Think of a movie you've loved since you were a kid, one you've seen so many times you know every frame. Now imagine being in a room where a place from that movie is right in front of you, a place so familiar you might as well have lived there.

Karen Maness doesn't have to imagine. Nine years ago, when she got to see an exhibition of vintage backdrops painted for Hollywood films, she walked into a space and was suddenly on the Von Trapp estate in The Sound of Music, looking down a walk toward a lake and the Austrian Alps beyond. "I was like, are you kidding me?" she recalls. "This is my childhood." Being with this piece of scenic art from the beloved film felt, she says, like "coming home."

Such is the power of these remarkable handpainted artworks that exist solely to fool your eye into believing it's seeing someplace real. North by Northwest's Mt. Rushmore? The Wizard of Oz's Munchkinland? West Side Story's Manhattan? All visually convincing, and all epic fakes. And by epic, I mean gigantic. That backdrop from The Sound of Music was 15 feet tall and 30 feet wide, and other backings – the trade term for backdrops – could be two or three times that, the size allowing for greater detail and contributing to the grand illusion. 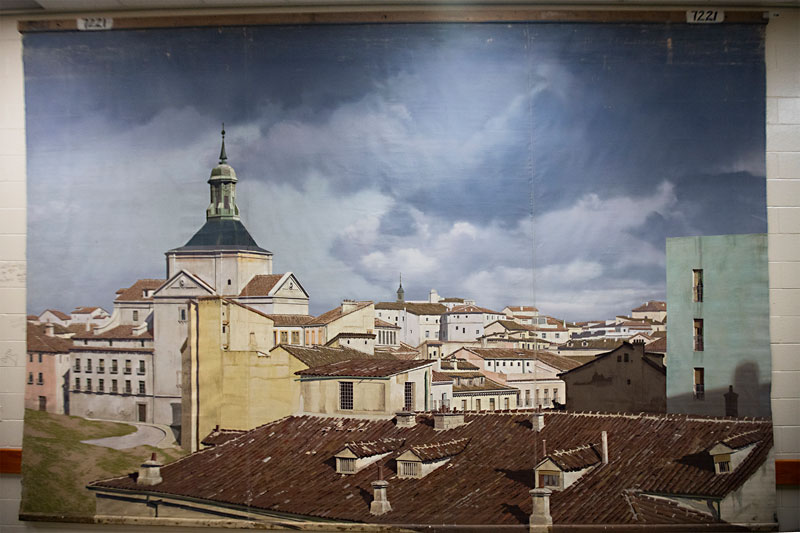 At the time she "visited" the Von Trapp estate, Maness, who works as scenic art supervisor at Texas Performing Arts and teaches art and design courses at UT-Austin, had just been recruited to develop a history of the largely undocumented field of painted backdrops in film. Her enthusiasm for scenic work – in movies, in television, in theatre and opera, in museums, in theme parks, everything – and her desire to recognize the people making it, caught the attention of Tom Walsh, then president of the Art Directors Guild. "We've been looking for someone to tell this story," he said to her, "and we think it's you." So Maness was put in touch with the last of the great old-school scenic artists – the ones who learned their art and craft in the studio system of the Forties, Fifties, and Sixties, when almost every film required some kind of backing to create the illusion of a landscape, a seashore, a village lane, a city skyline – in order to learn what they did and how they did it. "Every day was like the best day of my life," Maness says. "Because these artists that I interviewed became my next mentors and teachers. They fundamentally changed who I am as a painter and as an artist."

Out of her interviews and research came the 2016 coffeetable tome The Art of the Hollywood Backdrop, co-written with designer and UT professor Richard Isackes. But more significantly for Maness came a new mission in life: preserving the work of these unheralded masters of realistic painting, giving them the legacy they deserve, and extending their knowledge and techniques to a new generation. When J.C. Backings, the company that had exhibited the classic backdrops Maness saw in 2012, needed to find new homes for several hundred in its treasure trove, Maness helped see to it that 50 from the MGM studio came to UT. Since then, she's been using them as teaching tools, schooling her students in techniques that made audiences believe a two-dimensional image onscreen was actually a 14th century English cathedral or a hotel lobby in modern-day Rome.

"This is critical knowledge that has almost been lost," says Maness, "the ability to see color truly, the ability to understand what linear perspective does and means, the ability to create atmospheric perspective, how to make a mark efficiently with a paintbrush to communicate your design idea." Most of the artists who mastered these techniques have passed, she notes, and some that she interviewed for her book have passed since it was published, so "the time is really short" to pass this knowledge to younger artists. But, she adds with the kind of fervor that led Tom Walsh to tap her for the backdrop history in the first place, "that's what's so thrilling to me here. It's not just about the past; it's about the future and the chance to be that conduit of knowledge as best as I can." 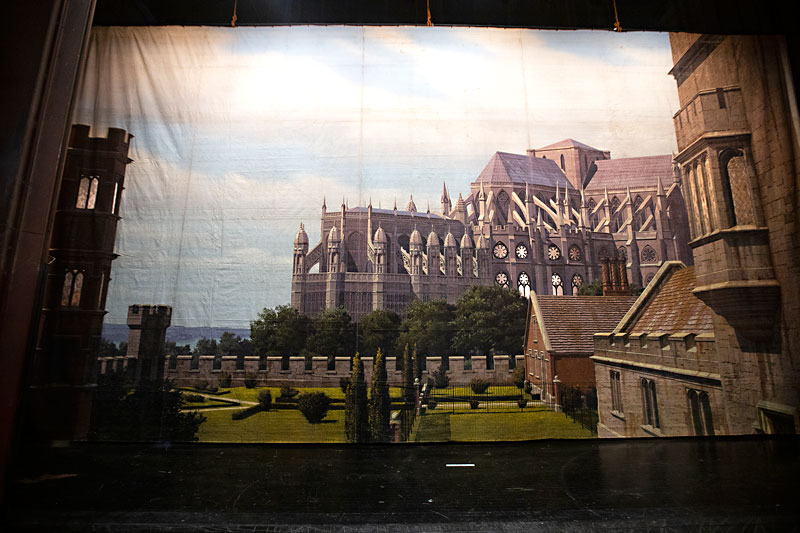 Students, however, aren't the only people that Maness wants to channel her knowledge to. She's long dreamed of sharing UT's MGM backdrops with the public. But what space is large enough to show paintings 30 feet tall? The Bass Concert Hall stage might be an option, she thought, if it weren't booked all the time with performing arts events. Enter the coronavirus stage left. "The pandemic created the opportunity to exhibit these monumental works of art for Austin to see," Maness says. "It's a silver lining to this disaster in that this space could be available for an audience to walk into." So with the support of Texas Performing Arts and UT's College of Fine Arts, Maness was able to create "Behind the Scenes: The Art of the Hollywood Backdrop," an exhibit of 12 MGM backdrops painted between 1944 and 1966 hanging onstage and backstage at Bass. The movies range from a biblical epic to historical dramas to a Western, with the best known of the lot being National Velvet (you know, young Liz Taylor opposite a dreamy horse). Still, even if most of the films may not ring a bell – Tip on a Dead Jockey, anyone? Two Loves? The Outrage? – the backdrop paintings produced for them are memorable: for their scale, their crisp execution, their sheer visual splendor.

Maness can go on at length about the qualities that make these paintings special, showing that her enthusiasm for Hollywood backdrops hasn't waned a bit since the day she saw her first one in person. And just as she wants to pass on the techniques for painting them to her students, she wants to pass on her excitement about the backdrops themselves to everyone who sees this exhibition. Remembering her first fateful encounter with them at J.C. Backings, she says, "I walked in there, and I was blown away. I'd never seen painting like that. Ever. I'd been a scenic artist for 20 years at that point, and I'd never seen scenic painting like that, with that ability for naturalism, realism, the confidence of brush stroke, their understanding of color temperature and palettes, and that efficiency of line work. I was just gobsmacked. So that love and affection and wonder is what I'm hoping our audiences will experience when they see these things."

“Behind the Scenes: The Art of the Hollywood Backdrop” is on view Feb. 11-March 21 on the stage of Bass Concert Hall, 2375 Robert Dedman, UT campus. For more information, visit www.texasperformingarts.org. 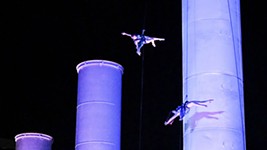