The Blanton Museum Undertakes a $35 Million Makeover of Its Grounds

With the international architectural firm Snøhetta, the UT museum will add community spaces and art to its outdoor experience 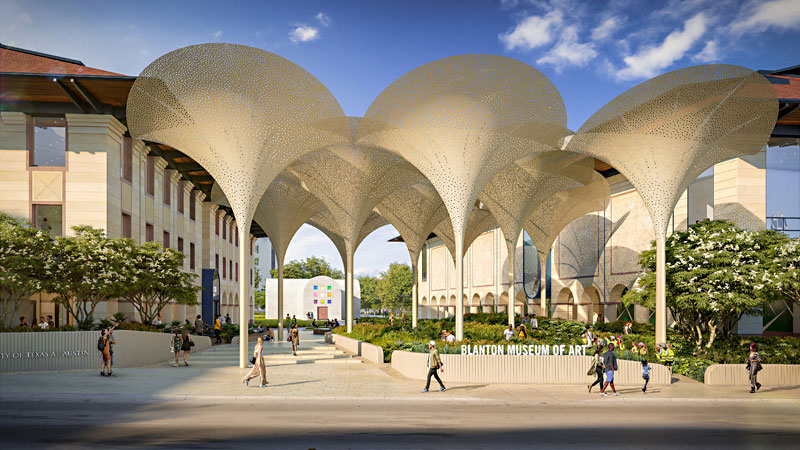 View from MLK Jr. Blvd. looking north toward the Faulkner Gateway and Austin by Ellsworth Kelly, with the Edgar A. Smith Building on left and the Mari and James A. Michener Gallery Building on right North view through the Faulkner Gateway toward Ellsworth Kelly’s Austin. Left: Edgar A. Smith Bldg.; right: Mari & James A. Michener Gallery Bldg. (Courtesy of Blanton Museum of Art)

Being inside the Blanton Museum is a great experience.

Getting inside the Blanton is, well, less of one.

If you're like most museum visitors, you come out of the University of Texas' Brazos garage – your closest parking option – only to face the Blanton's backside, distinguished chiefly by its loading dock. So you have to walk around the building to reach the entrance. Going left puts you on a narrow sidewalk between whizzing traffic on MLK Jr. Boulevard and the campus' unwelcoming southern wall. Going right offers a more pastoral setting and an enticing view of Ellsworth Kelly's architectural marvel Austin, but you get another rather featureless side of the museum exterior. Whichever way you get to the front, the museum's entrance is so deeply recessed in a colonnade that runs the full length of the building's front that, on your first visit, it can take a little searching to find (especially if you mistake the very similar-looking building across the plaza for the museum). Not the optimum way to begin your Blanton experience.

And the Blanton knows that – indeed, has known it for a very long time. Which is why it engaged a prominent international architecture and design firm – Oslo-based Snøhetta – to develop a master plan for the grounds, one that would reimagine the process of getting into the museum, as well as transform the plaza into an active gathering space for visitors and other members of the community. That plan, which has been in the making for a couple of years and will cost $35 million to realize, was unveiled last week, and while it doesn't do anything as radical as reorient the Blanton to face the garage, it definitely changes the look and feel of the Blanton's surroundings.

Imagine it like this: that walk around the building from the garage? When you take the right side, you'll amble along a winding path past stout Southern live oaks and gardens abounding in native plants – Texas gold columbine! Cherokee sedge! dwarf palmettos! – with spaces for sitting and artworks commissioned by the Blanton enlivening the way. On the left side, you'll pass a new drive for dropping off visitors (no more school buses riskily unloading students on MLK, yay!) and stroll up a sidewalk inside the university's perimeter wall (which will have undergone its own makeover) under more of the grounds' heritage shade trees.

Greeting you at the plaza will be extravagant new planters with more native flora and flowering trees – 25,000 plants will be added to the grounds overall – fresh signage, a reworked entry christened the Faulkner Gateway after former UT President Larry Faulkner and his wife Mary Ann, and, most astoundingly, 12 towering shade structures, the tops of which fan out like great rounded petals. The 40-foot-tall structures are placed such that the curving tops of two side by side create an arch, a visual echo of the ones in the museum buildings' colonnades, the vaults of Austin to the north, and even the Capitol dome to the south. (Three additional structures will be placed at the drop-off area to the east, establishing a visual link between the front and back of the museum on the south side.) Perforations in the structures will cast dappled shadows on the plants below, diners at new outdoor tables for the Blanton Cafe, and visitors to the Moody Patio.

Ah, the patio! It's the element that revives and reinvents the space bounded by the Blanton's Mari and James A. Michener Gallery Building, the Edgar Smith Building, and Austin. What's presently a grove of trees that are ailing and damaged by squirrels will be opened up into a spacious area with a large lawn, multiple spots for seating, and two raised stages for live music and other performances. Named for the foundation that ignited the grounds redesign with a $20 million gift in 2019, the Moody Patio takes the spirit of community engagement that the Blanton has created with such programs as B Scene, SoundSpace, and the Blanton Block Party, and manifests it outdoors in a permanent way.

With the Blanton's plaza being so invigorated and inviting, you may not be quite as eager to go inside as you have been, but when you do want to enter the museum, you'll have no trouble figuring out where to go. Instead of being recessed, the entrances to both the Michener Gallery and Smith buildings will have vault features – more echoes of those arches! – that extend outward from the facades. The Smith Building's will be upright at ground level, while the Gallery Building's will be upside-down and above the doors for a glassed-in viewing deck on the second floor. 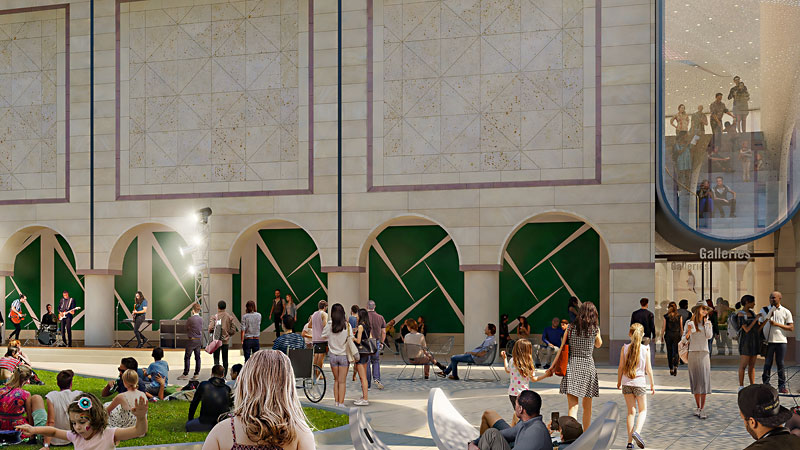 Detail of Carmen Herrera mural near the entrance of the Mari and James A. Michener Gallery Building (Courtesy of Blanton Museum of Art)

The Michener Gallery Building will no longer be your first stop at the Blanton, though. You'll go to the Smith Building for admission and check-in. This will relieve some of the traffic issues in the Gallery Building lobby and presumably free up that space for more art. But in this redesign, the Blanton hasn't restricted itself to adding art inside. Part of the big news of this makeover is that the museum has commissioned a major mural specifically for that wall that runs the length of the Gallery Building front, behind all those arches. Cuban American artist Carmen Herrera has adapted abstract forms from her 1956 painting Green and White to create Verde que te quiero verde (Green How I Desire You Green), a series of tilted green boxes outlined by white diagonal lines, suggesting the iris of a camera. The 105-year-old Herrera has said that considering the museum's history of collecting Latin American art and the presence of Ellsworth Kelly's last major work, "entering the collection at this moment marks a high point in my long career."

So this is the Blanton experience you have to look forward to. Museum Director Simone Wicha and the Snøhetta architects working on the project (among whom are UT alums Craig Dykers, Elaine Molinar, and John Newman) have clearly put a lot of thought into the transformation of the grounds, but even with $33 million already raised for it, their vision won't be realized overnight. A groundbreaking is set for Feb. 18 at 7pm – virtual, of course – with completion projected for late 2022. That may seem a long way off, but some of us recall how long it took to construct the museum's current buildings and, more recently, Austin. The lesson we've taken away is, with a Blanton project, it'll be worth the wait.

A version of this article appeared in print on January 22, 2021 with the headline: Grounds Swell