Review: The Nutcracker: Home for the Holidays 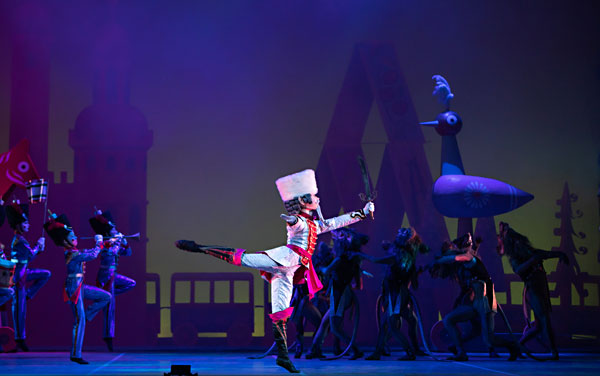 When it came to Ballet Austin's The Nutcracker: Home for the Holidays, my family took the title at its word. No dressing up the way we would have for the company's annual live production. No bustling to our seats the way we would have at the Long Center. Certainly no craning our necks to see who else was in attendance at Dell Hall. No, it was just the three of us, plopping down on the sofa together, dressed pretty much like we are all the time these days, especially for watching something on TV. To view the virtual version of the seasonal staple, we were home. Casual. Comfy. Laid-back.

You might imagine that in such an environment and such a mood – The Nutcracker on a flat-screen, without the energy of live performers dancing in front of you and the electricity that generates in you and everyone around you – you would miss some of the magic of the show in person. But that wasn't the case here. The Nutcracker we saw had been filmed during BA's 2019 run (a stroke of good fortune, it turned out), and the cameras captured the vitality and freshness of the performance before an audience. Moreover, the cameras got so close to the dancers – closer than any patron could – that we could see and appreciate details of Artistic Director Stephen Mills' exquisite choreography and the artistry of his company members that we hadn't been able to in past visits. Even having seen BA's Nutcracker two years ago with many of the same dancers, there was something original and entrancing to this one. It drew you into it.

Never before have I felt so much a part of the Silberhaus' Christmas party. For once, instead of observing it from a distance like a neighbor spying from the house across the street, I was in the room with Clara and Fritz, their parents, and all the guests, able to pick up on every expression and move they made. When good old Herr Drosselmeyer (Edward Carr, who long ago mastered the gentleman's grand gestures) wound up the Dresden doll, we could see how beautifully Leanna Rinaldi gave the mechanical maid not only stiffness of motion but also weight, each footstep landing as heavily as an anvil. By contrast, Elise Pekarek's Snow Queen, whose radiant joy made her appear as delighted to dance as we were to watch her, looked to lack any weight whatsoever; lifted by her Snow King (Orlando Julius Canova), she rose like a leaf on a breeze. The Rat King's minions have always been unsavory, but in the proximity allowed by the film, they were downright nasty – disconcertingly lean, with painted bodysuits that under Tony Tucci's lights looked like slimy fur, as if they'd just slithered out of a sewer pipe. Conversely, the Sugar Plum Fairy may have never been more regal and elegant than she was here. We could see the flowing grace in everything that Jaime Lynn Witts did: her rise en pointe, her lift of a leg to a perfect right angle, her arc of an arm like a fountain of water, her gentle turn of a wrist, even her lift of an eyebrow. As my daughter noted, in every movement, Witts was like the Platonic ideal of what a ballerina should be. What a treasure to witness that – and to have it recorded for anyone to enjoy.

No, it wasn't live, but this virtual version of The Nutcracker was like a snow globe: a small winter wonderland behind a shell of glass, and no less transfixing for that. You know how being contained in a world of its own makes a snow globe even more captivating? So it was with The Nutcracker: Home for the Holidays. It succeeded in creating this enchanted space that we yearned to be part of. Of course, we can't wait to be free to experience The Nutcracker in person again, but we're pleased to have had this substitute. How else would we have gotten so near to these visions of sugarplums dancing?

Ballet Austin’s The Nutcracker: Home for the Holidays is still available to stream through Jan. 1 for a donation of $100, made by Dec. 30. For more information, visit www.balletaustin.org.

A version of this article appeared in print on December 25, 2020 with the headline: A Part of the Party