In K ! :D D: Ö, you get to not only watch these kinetic provocateurs move through virtual environments, but also influence their actions 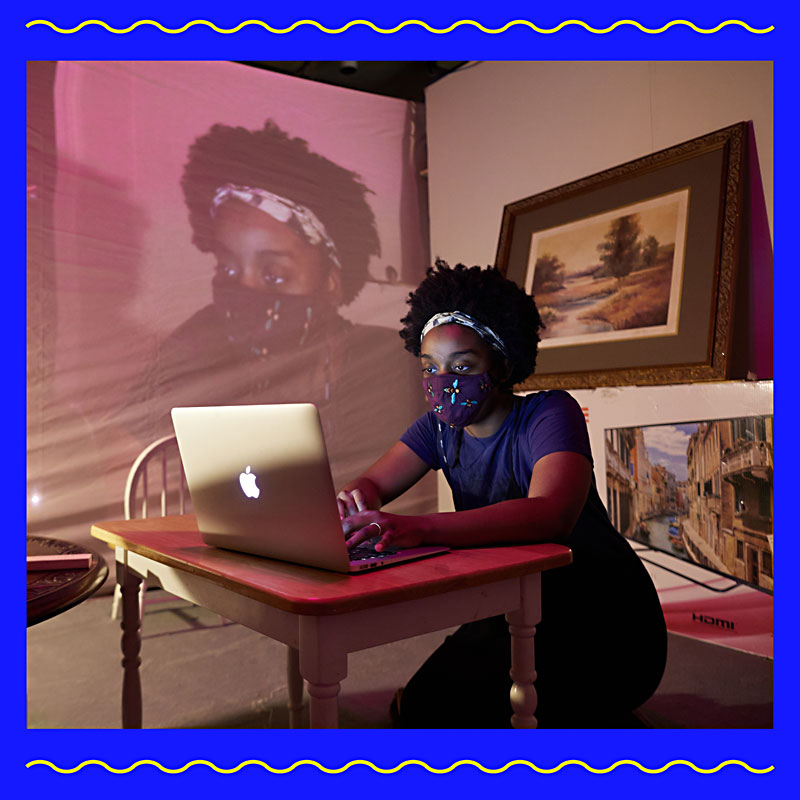 Courtesy of The Frank Wo / Men Collective

Listen: "Stemmed from the seeds of childhood magic, there exist five rooms, each a distinct familiar-but-not-quite home environment that possesses its own features and surprise tricks. Five live kiddadult characters inhabit these personalized rooms, and the audience has the ability to observe them through 11 potential camera views, eventually channel-changing as they wish."

OK, we get it: This is a new one of those livestreamed virtual things that, thanks to COVID-19, we've been seeing so much of lately. But, citizen, but: This particular online event, K ! :D D: Ö, is a co-presentation from big-time culturemongers Texas Performing Arts and Fusebox Festival; it's a result of TPA's multipartite residency program for Austin-based performing artists; and (here's the best part) it features Frank Wo/Men Collective.

Yes, them: That gang of kinetic provocateurs whose work "is underpinned with intersectional social awareness, gender expressionism, Freudian curiosities, body positivity, and absurdist exploration." Back in the pre-corona fall of 2019, Frank Wo/Men Collective took over the Blue Genie Art Bazaar space to unleash a show called Rub a Duck. If you saw it, there's no way you've forgotten it. There's no way your eyes, your brain, your heart, your genitals, have forgotten it. And if you were reading the Chronicle back then, you might remember that the show was in two of our Arts Top 10 lists at year's end. Your current reporter reviewed the watery spectacle for this paper, in fact, fairly sputtering out a gobsmacked rave that ended with this exhortation: "Make sure that you see whatever the Frank Wo/Men Collective decides to do next."

In These Troubled Times™, when we all need something bold and weird by way of distraction and maybe even a smidge of enlightenment, to maybe freak us out in a delightful way, it's good to be able to tell you that this K ! :D D: Ö is what the collective is doing next. There will be three different staged environments for them to do it in: an arctic tundra, an alternate- universe bounce house inhabited by jiggle pets, and a post-apocalyptic parkour obstacle course. The borders of these places will be porous, though, and inhabitants will leak from one to another, and you – you, the audience, with your digital interface – can influence both the environments and the characters' actions while the cameras reveal up close and omniscient perspectives according to your voyeuristic whim. The press release notes: "Frank Wo/Men's project is physically virtuosic, dramaturgically detailed, and shockingly interactive."

Well, of course. But that doesn't explain why, in preparing for this gig, dancer Alexa Capareda, that seemingly rubber-limbed sprite, had to run to UT's McCullough Theatre while carrying a giant teddy bear. ("I now know he has a 37-inch waist," she tells us.) Or why Chris Conard had to take photos of that bear in a toilet. Or why Kelsey Oliver custom-fitted a pair of underwear to her head, Tori Reynolds wrapped a phone cord around their face, Roberto Di Donato got into a cotton-ball fight, or – Michael Bruner, what odd thing have you done during the many rehearsals for this new show?

Bruner smiles like the embodiment of childhood magic. "I became a bunny monster," he says.

But wait – Bruner's not one of the performers; he's an "integrated media co-designer." So will we actually get to witness some monstrous bunny thing dealing with a post-apocalyptic parkour obstacle course? Is this experience going to give us sugar-frosted Donnie Darko flashbacks?

Don't know about you, dear reader, but we're looking forward to finding out.

A version of this article appeared in print on December 11, 2020 with the headline: Frank Wo/Men Collective’s K ! :D D: Ö Offers a Warped Sense of Control