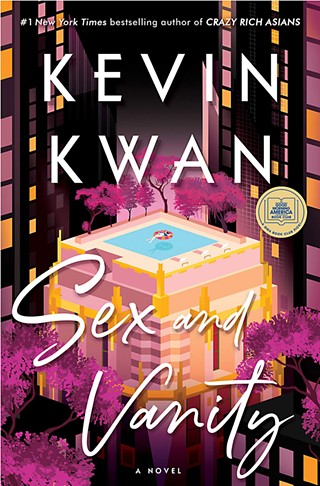 Sex and Vanity is Kevin Kwan's latest take on the one-percent of the one-percent, a gloriously satirical bildungsroman, which reinforces the age-old notion that money can't buy happiness – but if you're lucky, it can buy an apartment on Park Avenue, a place in the Hamptons, and a seat at the proverbial table.

The book opens on the island of Capri, where a destination wedding of jet-setting proportions is getting underway. The bride, a Taiwanese American heiress, and the groom, an Italian count, have invited an Ivy League assortment of international guests – the typical over-the-top cast found in a Kwan-semble.

Lucie Tang Churchill, the story's protagonist, is attending the lavish affair with her much older, much WASPier cousin Charlotte. Lucie, a 19-year-old scion from the same New York sphere (and prewar building) as the bride, is from a prominent family that traces its bloodline back to the Mayflower. Lucie is half pilgrim, half Asian. Her mother is third-generation Chinese American, a subtle sticking point for some of her white relatives.

On their first day in Capri, Lucie and Charlotte make the acquaintance of wedding attendees Rosemary Zao and her son George. Rosemary insists on giving the two cousins her deluxe ocean-view suite in light of a hotel reservation snafu. "We have a house in Sydney, in Watson's Bay, where we can see whales do backflips, and another beachfront house in Hawaii, in Lanikai," she assures them.

Lucie finds herself strangely drawn to the Hong Kong-born, Birkenstock-wearing George – an errant attraction Charlotte blames on her young cousin's half-Chinese heritage. (Kwan plays with identity dichotomies throughout the book.) A passionate rendezvous between Lucie and George gets caught on camera – a wedding drone, actually – which results in the cousins' quick departure from Capri.

Fast-forward five years to another exotic land: the Hamptons. Lucie's near-perfect New York existence (dream job, dream guy) comes to a screeching halt when a certain someone and his mother resurface in East Hampton. Though newly engaged to the most "eligible gentleman on the planet," according to Buzzfeed, Lucie's unexpected encounter with George kicks up the kind of feelings that can make a girl question the 49-carat cabochon emerald ring weighing down her finger.

The 47-year-old Kwan, who was born in Singapore and went to high school in Houston before moving to New York City, seemingly draws from his own dichotomy as an outsider with an inner circle. Delighting in snooty shorthand and name-droppy details, he offers a sharp sociological take on the insular lives of the untouchably rich.

Told in a fast-paced manner that equips the reader with clever footnotes ("* Billionaire + Millennials = Billennials"), and Upper East insights ("To paraphrase the Patek Philippe slogan, it could be said that one never actually owned an apartment in 821 – one merely looked after it for the next generation"), Kwan's novel is a hilarious analysis of the interlocking directorate of power and wealth – not to mention sex and vanity.