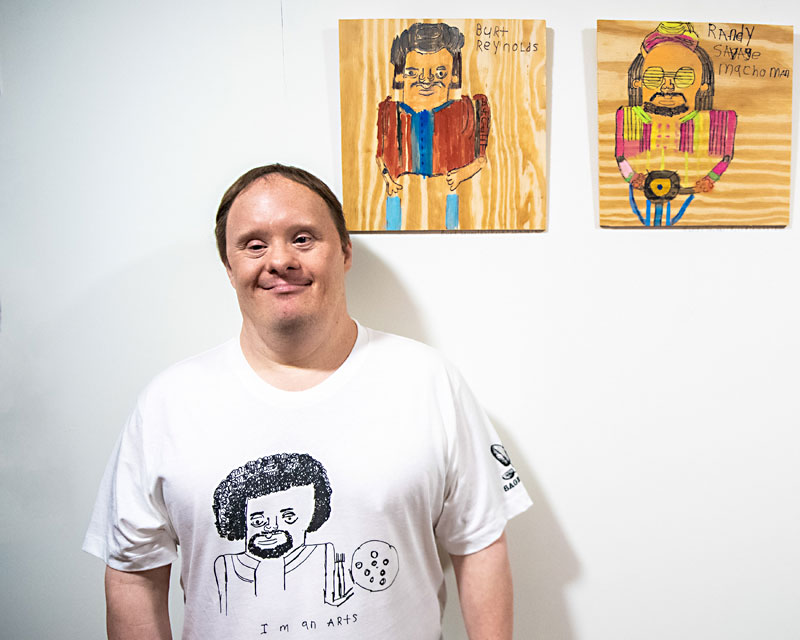 Tote bags have never been just about lugging groceries. They're a declaration – a once-blank canvas on which we signal our passions, our politics, where our donation dollars go. In the case of Austin artist Rick Fleming, tote bags also turned out to be his ticket to meeting the guy he hopes will become the next president.

The journey began back in May, when Lucy Gross and Katie Stahl launched the Commission Project as a way to keep connected to artists affiliated with SAGE Studio, the Eastside studio and gallery for artists with disabilities that the duo founded in 2017. Soon, several artists began taking on custom commissions, Gross relates, with Gav Sears specializing in line drawings of homes and buildings, Sam Eiler creating portraits using Sculpey, and Fleming, who excels at pop culture portraiture, drawing famous figures on tote bags.

Through the Commission Project, Fleming paid homage to the likes of Dolly Parton, Whitney Houston, and Leonard Cohen, but it was his double-sided tote touting the Democratic presidential ticket of Joe Biden and Kamala Harris that caught traction on social media. The Biden campaign got in touch, which led to a Zoom call in early October between the former vice president and Fleming. They both had news to share: According to Gross, Fleming "got a chance to tell the VP how he has personally donated a portion of his art commissions to the campaign," while Biden took the opportunity to offer the artist his biggest platform yet – a spot in the official "Team Joe" campaign store, where as of this week you can now purchase Fleming's Biden tote bag portrait.

One of Fleming's Dolly Parton portraits is currently running in "Home Makers," SAGE Studio's home-themed virtual exhibit featuring the work of 18 artists with disabilities from around the world. (Check it out soon; the exhibit closes Oct. 31.) Like so many other galleries, SAGE has sought ways to innovate during the COVID-19 shutdown. Early in the pandemic, they relocated operations to Canopy Austin, but the studio where artists gather and get support from Gross and Stahl has had to stay closed; Gross says they've made supply deliveries to artists at home and check in weekly via Zoom. (The gallery is open by appointment only.)

Next up for SAGE? Another virtual exhibit in November, this one running as part of Austin Studio Tour, this year's evolved version of E.A.S.T. "It will be a solo show featuring Sam Eiler and his incredible puppets," Gross says. "People will be able to see 10 of Sam's puppets through an interactive exhibition on our site and have an opportunity to enter a raffle to win a custom puppet made by Sam."