New ICOSA show unites the spirits within via the surfaces without 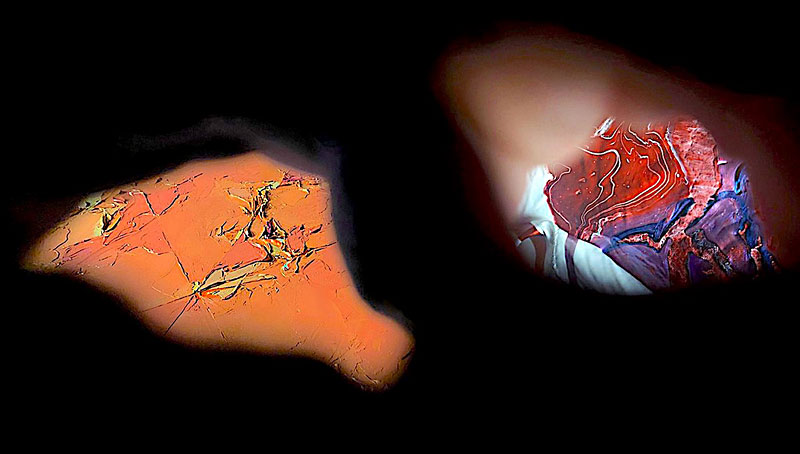 A comity, the dictionary informs us, is "an association of nations for their mutual benefit," and that definition in conjunction with this ICOSA Gallery show's title brings to mind a certain Gary Numan song.

It's a terrific song – Numan's whole Savage: Songs From a Broken World album is a solid and stunning musical achievement – but the song's title, "Ghost Nation," haunts redundancy when vocalized in the mix as "Dead Ghost Nation." Because aren't ghosts, like, already dead? The redundancy might be only a matter of timing, an elision of punctuation, granted; and anyway it's redundancy's more useful cousin, reproduction, that spurs this consideration of the "Comity of Ghosts" exhibition of works by Shawn Camp and Darcie Book.

Camp has long been creating inspired reproductions of the earth on which we tread, rendering abstractions of landscape-as-seen-from-above, like aerial photography translated into thick fields and swaths of oil and acrylic. He powerfully captures the soul, so to speak, of the planet's surfaces on his often immense canvases and other substrates, effectively limning the essence of this terrestrial machine. ICOSA's current show offers, in part, a small array of such Campian wonders.

Book, the other artist in this two-person exhibition, takes paints that are usually used to represent the surfaces of things in this world and makes those pigmented fluids into the surfaces themselves, manipulating sheets and strips of drying acrylic into polychrome sculptural forms that function as both ghost and shell. Her Building Spirit (Un-weaving) features a portion of linen fabric that's been partially unraveled, its multitude of disintegrated threads hanging like an elongated veil toward the floor, the upper part of the cloth still intact and covered with a skin of swirling acrylic colors; this is a literal reproduction of iconic ghostitude, we reckon, although it seems a ghost sprung from among the more elegant clientele of Studio 54 back in the disco'd up days of the 20th century. (Please note, lest we offend the spirits, that this description is meant in a laudatory way.)

Here now are the two artists in one show, ambassadors for their gatherum of aesthetic apparitions at ICOSA in the Eastside's Canopy complex, and before you even enter the gallery you can, via the front window, view the titular creation, Comity of Ghosts, a video/foam-board/acrylic collaboration between Book and Camp – an evocative taste, a hint, a tease of what else you'll encounter once you've crossed the threshold. This comity of ghosts may be associated, per the definition, for its own benefit; but it will also benefit the eyes and minds of those who choose to make contact.

Bonus: The show's ambient soundtrack, the music that plays almost too faintly while you peruse? The sort of ethereal yet compelling compositions that your reviewer – a Loscil fan, a Steve Roach aficionado – can't stop buying albums of on Bandcamp? Was created by Camp as well.

A version of this article appeared in print on October 16, 2020 with the headline: “Shawn Camp & Darcie Book: Comity of Ghosts” at ICOSA Gallery 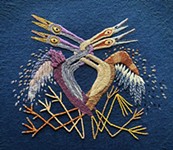 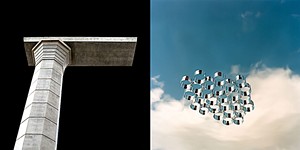