Ways of Remembering: A Racial Geography Tour of UT-Austin’s Campus 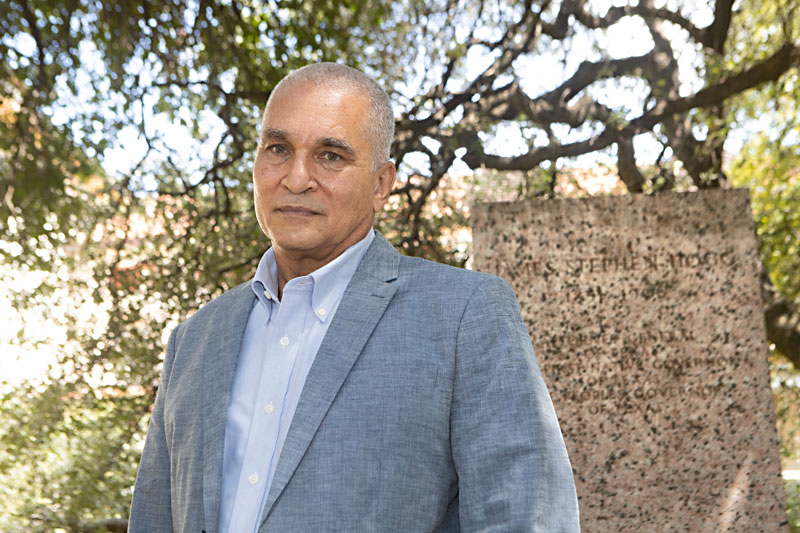 For more than two decades, Gordon, an associate professor of African and African Diaspora Studies and vice provost of diversity at the University of Texas, has worked to correct those silences through his Racial Geography Tour, which presents the campus as a "racialized and gendered space," pointing to remnants of the university's racist and sexist past still visible in the campus' physical landscape.

Before the pandemic, interest in the campus' racial geography was so high that Gordon was giving more than 20 tours a semester. Although public health concerns have shut down in-person tours for now, Austinites everywhere can engage with his research remotely through the university's virtual Racial Geography Tour.

Launched in the spring of 2019, the virtual tour leads viewers through a narrated walk around campus. At each stop on the tour, an essay accompanies Gordon's narrated interpretation of the landmark. Just as with the in-person tour, the virtual version discusses the Civil War, Reconstruction, Jim Crow, desegregation, and more recent activism that has led to some campus changes.

The tour begins at the Littlefield Mansion, the former home of an infamous early UT benefactor, George Washington Littlefield. Prior to the Civil War, Littlefield owned two cotton plantations, enslaving a large number of people. During the war, he served as a Confederate officer. Following Emancipation and the South's defeat, Littlefield gave up on his plantations and became an extremely successful cattle baron.

As Gordon points out on the tour, "it's very fitting that the University of Texas' mascot is a Longhorn, as much of the wealth that created the university came from the cattle industry – although this is problematic when you think of the ways in which the wealth [of] Texas was built on the annihilation of Native Americans, the decimation of buffalo, and the expansion of industrial capitalism into the West.

"We still love our Longhorns," he adds.

As with other stops on the tour, the Littlefield Mansion stop places the building's history within our nation's larger history, weaving together Littlefield's role in antebellum Texas, the Civil War, Manifest Destiny, and Reconstruction – context few passersby stop to consider.

"A lot of people pass by these statues and symbologies without thinking about it all," says Gordon. He hopes that participants leave the tour with a better understanding of how past inequalities remain present in the structures we inhabit today and encourages viewers to apply this critical lens beyond the Forty Acres in their own communities.

Gordon's lessons seem to be sticking. For years, student and community activists have utilized his research to call for campus changes, such as the removal of Confederate monuments or the renaming of campus buildings named for Confederates and segregationists. This summer, student-athletes calling on the university to eliminate the use of the "Eyes of Texas" song cited Gordon's tour stop at the Texas Cowboy Pavilion to explain the racist origins of the song's use in minstrelsy.

"The past is not innocent," says Gordon, "and the present is not innocent of that un-innocent past." Building a more equitable present starts with reckoning with our past and revealing the silences of our present. As the tour argues on its final stop, it is only through this study that, "we can begin the hard work of transforming the inequities that continue to exist."