"Ben Muñoz: Over My Head" at Flatbed Center for Contemporary Printmaking

These bold new woodcuts capture the depth and bigness of life 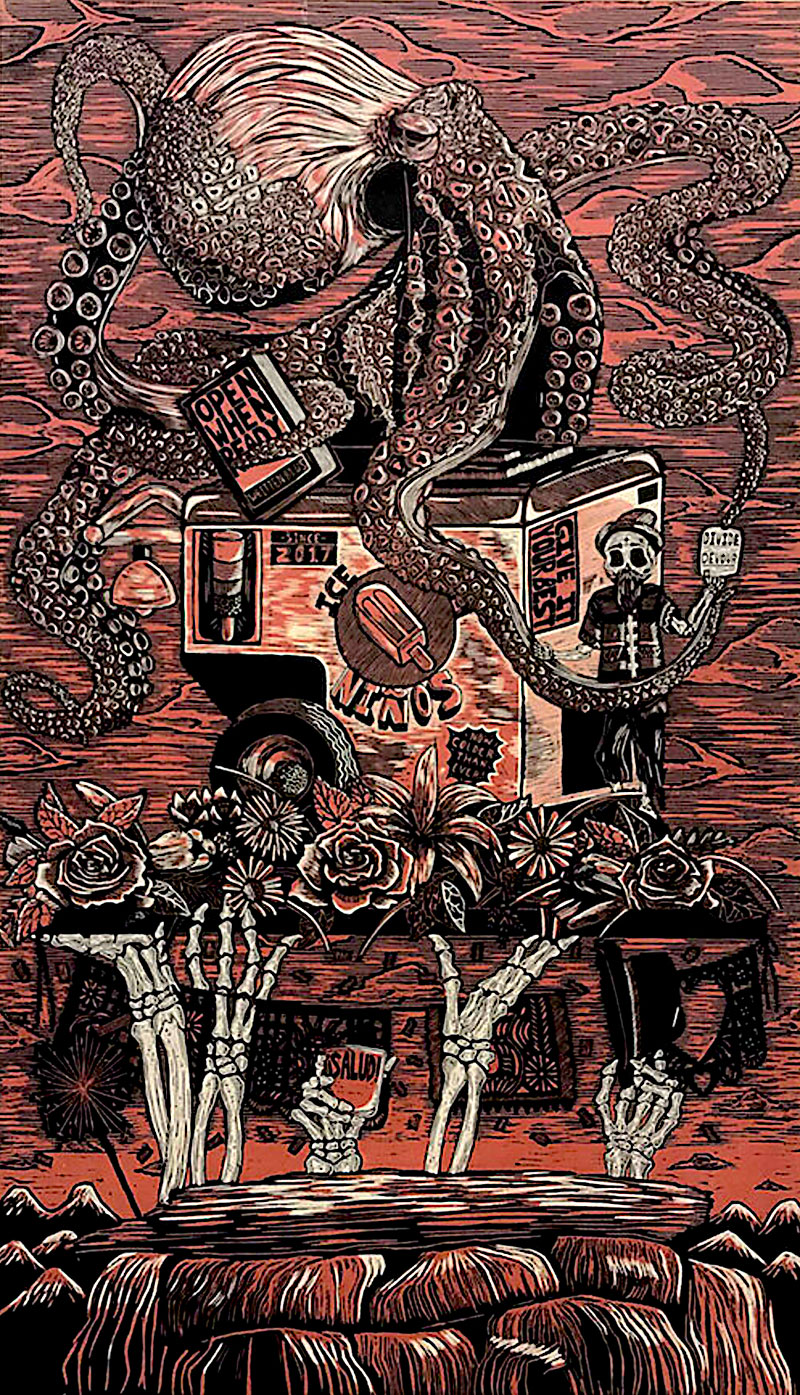 Chiaroscuro woodcut from the "Familia" series by Ben Muñoz

1) The timeless: Flatbed Center for Contemporary Printmaking is dedicated to making and exhibiting original prints and works on paper, and supporting work by artists who are active with a printmaking practice. The center's gallery has a large exhibition area – and a collector's showroom, where a vast inventory of original prints are housed.

2) The current: Visiting groups of four or fewer may enter at one time, and masks are required. Appointments don't have to be made in advance – you could just show up – but they're appreciated.

3) Right now: The huge and intricate woodcuts of Texas native Ben Muñoz are part of a one-man exhibition called "Over My Head," and the show's up until July 29.

It's kind of a new thing, driving to the area around Burleson Road for an eyeful of some excellent creative work. Sure, the Vortex Repertory Company used to be based somewhere over there back in the day – but "back in the day" was more than two decades ago. And Blue Genie's work studios have been there for a while, and that Independence Brewery and its partner-in-cuisine Killa Wasi are recent additions to what you might call the neighborhood, and so on. But still.

The new location has certainly worked out well for Flatbed, though. Founder and director Katherine Brimberry told us as much when we stopped by to check out the Muñoz exhibition, and everything about the space backed up her happy assertions. You remember the old Flatbed on MLK? That was a pretty impressive site, although a bit problematic in its layout, and it seemed a shame that the printmongering powerhouse had to leave. But this new place? Bigger. Better. Even fancier.

Which made it a worthy setting for this current show, which boasts two series of oversized woodcuts by Muñoz, whose family came to Texas out of Mexico three generations ago and whose carving and compositional skills might've impressed Albrecht Dürer (out of Germany) even more generations ago.

Muñoz's "Endless Endeavor" is a sequence of woodcuts that measure 100-by-52 inches each. "These massive pieces communicate both in scale and content the idea of life being larger and much more than ourselves," the gallery notes tell us, and Muñoz communicates that idea via starkly monochrome arrangements of regional and personal iconography, incorporating a diversity of Texan and Mexican tropes into towering archiform tableaux that turn Flatbed's gallery walls into a multipartite panorama that rewards the eyes and the mind. A little smaller (36-by-62 inches) but hardly less striking are the woodcut prints of Muñoz's "Familia" series that explores cultural identity as a family assimilates into the United States.

Now, the "Endless Endeavor" series was created for the Art Center of Corpus Christi, so maybe you're a relentless arts maven and you previously encountered them there? But even then, you haven't witnessed these "Familia" prints, with the two recent Flatbed-produced additions Heed and Epilogue rendered in chiaroscuro – so they're the first colored prints in the artist's expanding oeuvre.

Suggestion: You might want to get in on the ground floor, so to speak. You might want to grab some early-career bragging rights and pay a visit to Muñoz's "Over My Head" before the artist's oeuvre, as we've said, expands any further. Because his is definitely a trajectory of creation to watch.

"Ben Muñoz: Over My Head"

A version of this article appeared in print on July 17, 2020 with the headline: As Big as It Gets