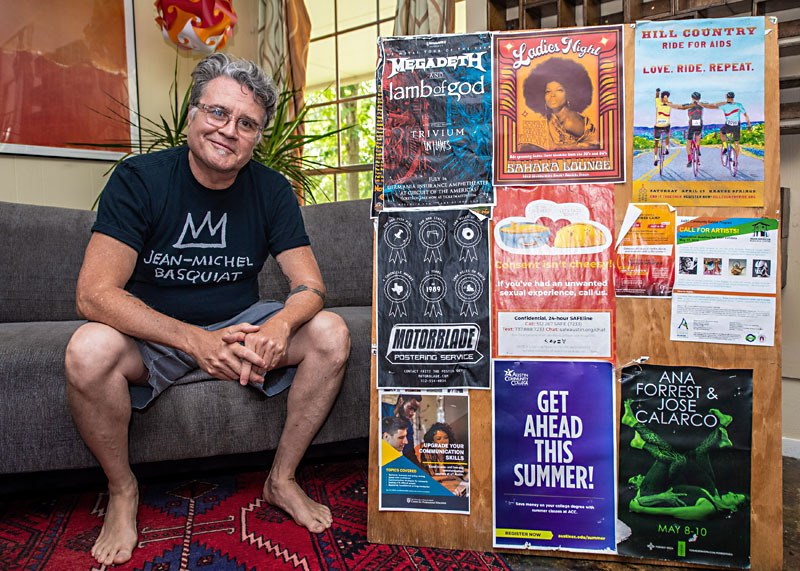 "When I moved here in 1998, I ran into Fritz almost immediately," says Ricardo Acevedo, the man who's taken over longtime Austin postering service Motorblade. "I was designing and putting together a show that was gonna go on at the Parish – I think it was called the Mercury back then? And so I got to know him pretty quickly, because of what I did for a living and who Fritz is."

Who Fritz is: The founder of Motorblade Postering, Frazier Peters "Fritz" Blaw started out in the early Nineties, covering the city with fliers for theatre and dance companies and bands and unique art happenings via motorcycle or roller blades. He maintained community-notice bulletin boards in cafes and clubs and arts venues and more, eventually growing his circuitous route to comprise 200 locations. And after almost 30 years of rolling and rocking the local gig-poster scene, he recently abdicated his wheely throne and moved to Philadelphia.

And who is this Acevedo?

"Back in my New Wave and punk rock days, I did a lot of posters for my band, and for a lot of punk and New Wave bands in California, where I was living at the time," says the sturdily built, gray-haired upstart. Acevedo's spent much of his life as a musician, a writer, a visual artist. In the audio department, he's a founding member of bands Freaks Amor, the Blue Box, Second Culture, Cup, and PetCatMan; working solo but often collaborating with equally talented peers, he wields synths and samples as Lost Cat Magnet. Graphically, his coffeetable book of photography, Night, was among our more positive reviews in 2013. Before that, he'd teamed up with acclaimed dancer Ellen Bartel for a multidisciplinary spectacle called Sonámbulo. And that's just the tip of Acevedo's creative iceberg.

And now, with his predecessor's blessing, he's the new Motorblade man.

"Nobody knew that Fritz was thinking about shutting down," says Acevedo. "And then you posted that article in the Chronicle, and we were all surprised. To be completely honest, for the last 15 years I've been thinking about postering services, and at one point I even asked if he needed any help, you know? And he said, 'No, I've got it covered, thanks.' But I'd been thinking about it, because I had a lot of clients, and Fritz was like the only game in town for distribution. So, when it came to him leaving Austin, it just seemed natural to ask. So I said, point-blank, 'What would it take for me to take over Motorblade?'"

What it would take, as explored during a series of meetings over tea and tequila in Blaw's front yard, was a sort of mutual understanding.

"Fritz discovered that I'm weird enough to assume his mantle," says Acevedo, laughing. "And that I see postering and poster design as an artform. I mean, yes, many posters are disposable things – but there's a creative person behind each one, more often than not, putting their best intentions into that creativity. And with Motorblade, I hope that, at the same time – while, yes, I am weird, I'm strange, I'm an art geek – but I'm also perhaps more, ah, professional? And I think Fritz liked that, because he saw it as the thing he was the weakest on. So he figured that I – and my wife, Susan, and our son, Domingo – we'd be the perfect team to move things forward, however they're going to manifest in the next few months."

And the vetting process went both ways. "We saw the Motorblade books," says Acevedo. "We talked to his tax person and got a pretty good understanding of the business. It's a seasonal thing, and there are ups and downs – there always are – but, even in Fritz's worst periods, he was making a decent chunk of change doing what he did. And I believe I can parlay that and make it more defined. And, because I'm also a graphic designer, I can offer those services, too – designing the posters themselves. So that option will always be there now – and it wasn't available with the old Motorblade."

“One of the places I’ve been able to connect with already is Thundercloud Subs,” continues Acevedo, “which is one of Austin’s most consistent postering environments. I’ve been going to each of the locations, and they’re like, ‘Oh, you’re the new Fritz!’ So that’s coming together.”

And what was available with the old Motorblade will continue with the new incarnation – only moreso. "We cover a minimum of 60 legal places around town," says Acevedo. "And, by having relationships everywhere, and with the Motorblade name fairly well known, that lets us cultivate new venues for postering. So I can be like, 'Hey, you've got some posters up there, they're in serious disarray – how would you like us to come in and keep your boards clean for you, keep them updated, and just be the people hanging event posters for you?' And people seem to appreciate that: They want to help support the neighborhood and the community as a whole, but who has the time, when they're running a business, to deal with a community billboard?"

"One of the places I've been able to connect with already is Thundercloud Subs," continues Acevedo, "which is one of Austin's most consistent postering environments. I've been going to each of the locations, and they're like, 'Oh, you're the new Fritz!' So that's coming together. Also, on the Eastside, Fritz pretty much stopped around Chicon, Comal, that area. So I've expanded all the way out to Canopy on Springdale – that's one of the first things I did when I started working with our new client, Montopolis Productions – and all the surrounding art spaces around there. And, on the west side, we go all the way out to Lakeway. And, to the south, we go to just this side of Buda. We've got more coverage in the north part of town, too, and go up to certain places in Round Rock."

Of course, even "Fritz's worst periods" can't match the abysmal state of business that everyone is suffering through in this pandemic. But, at least this early in the game, Acevedo remains optimistic.

"I know it's gonna be slow starting out," he says. "That's unavoidable, until we all feel comfortable around each other again. Which, sadly to say, probably won't be until the fall. And, even then, it'll be tentative at first. But Susan and I understood, when we took this on, that it would be slow. We're not by any means financially flush people, but we've saved enough money to be able to, ah, weather the storm. We're doing okay, we're hanging in there, and we feel pretty confident that, by fall, we'll be doing pretty damned good. Because we're all going to be getting together again – eventually. We're going to get together to enjoy something, whether it be an art show, a theatre piece, a sporting event, a live music concert of some type: That will happen again."

A version of this article appeared in print on July 3, 2020 with the headline: Motorblade Returns