This solo exhibition asks, What happens when shapes run away to join the circuits? 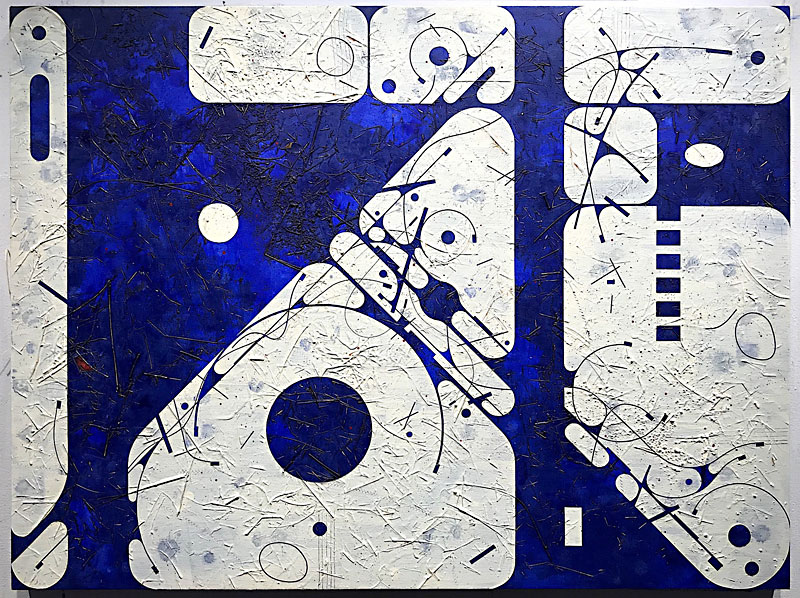 The tangram, Wikipedia informs, is a dissection puzzle consisting of seven flat polygons, called tans, which are put together to form shapes. And you look at Lee Albert Hill's paintings, now on display in an exhibition called "Signs" at Austin's CAMIBAart, and you're going to think of tangrams. Which is a decent enough start, but the artist is no stingy minimalist and he's certainly not stopping there.

For one thing, many of Hill's paintings are really big – and the various flat polygons they depict are commensurately sized. So, like, huge tangrams. In visually compelling patterns. To begin with.

And then, another thing, these big, flat, and mostly monochrome polygons are overlaid with thin lines coming in from the negative space, curvilinear chaos like illustrations of subatomic events from CERN's bubble chamber. Or the lines aren't contrasting invasions of the polygons, sometimes; instead, they're equally thin and complicated extrusions from the polygons, shifting the painting's resemblance toward diagrams of the complex circuitry that must power God's Own Boombox.

(Look at the image included with this review and let me know if I'm too far off base with these descriptions, OK, reader? Unless you're the ghost of Jack Kirby, I may have to fight you.)

But then, the final thing, Hill doesn't just paint these marvels on any old canvas – or on any new canvas, for that matter. For many of his works, the artist first sets large swaths of canvas out in the open wilderness, to be worked upon by the elements for days – bleached and blanched by the blazing sun, stained and strained by the falling rain – and then uses them as the ground for his exercises in graphic brilliance, often embedding the flood of grass shards and other plant matter that accosted the fabric. Often using the paint not just for color but for distinct topographical results.

It's the last thing that really sells these works, I'll suggest. I mean, literally sells them. Because you can look at just the visual designs and they'll wow you – but why not just get a cheap poster version so's to enjoy those purely optical effects? Or you could be a collector who prefers work with a definite texture to it, work that results in a unique and tactile object, but you're disappointed when such things aren't also a treat for the eyes? In pieces like Bluestem #36, Minty on the Bowery, and others, Hill combines both those methods of engagement with irresistible power.

As almost a sort of bonus, many of the paintings' colors are inspired by real-world phenomena that – ah, but we'll let the artist (or Camiba's Troy Campa or Veronica Valarino) tell you about that in person, right? When you set up an appointment to see this stunning show in person, everybody masked.

A version of this article appeared in print on July 3, 2020 with the headline: Wiring God’s Own Boombox 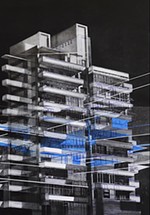