A Year Later, the Time Is Right for Another Conversation About Notes From the Field

In the wake of George Floyd’s murder, Zach Theatre streamed its staging of the 2019 production and led a discussion on Zoom 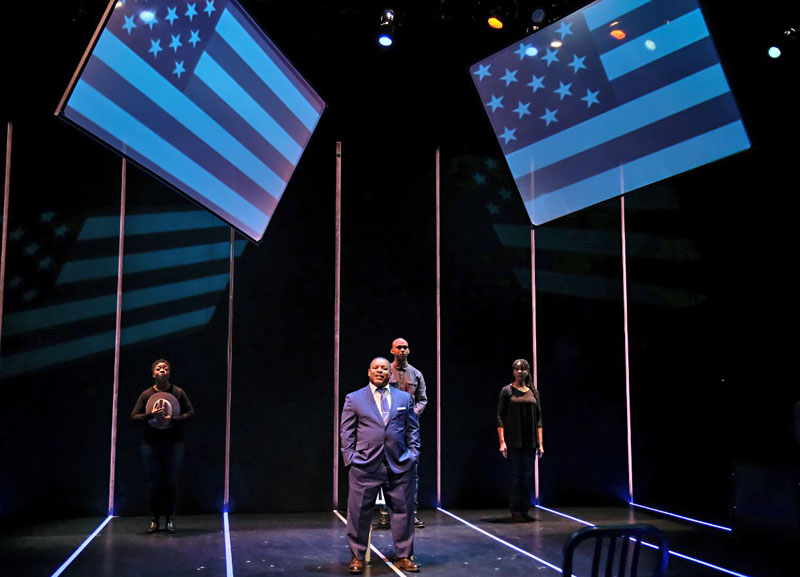 Cast of Notes From the Field (Photo by Kirk Tuck)

Part of what we value in theatre is the room it provides for ideas to be weighed, debated, discussed. That's been missing since the pandemic brought the curtain down on all our stages, but last week Zach Theatre briefly lifted it for a pair of Commun­ity Conversations centering on Anna Deavere Smith's Notes From the Field. A documentary theatre work built on Smith's interviews with people about the link between education and incarceration – what's called the "school to prison pipeline" – Notes examines how people of color and people living in poverty who don't succeed in school are most likely to end up behind bars.

When Zach staged the show a year ago, with four local Black actors playing the interview subjects originally portrayed by Smith herself, the theatre hosted group discussions during and after every performance. In the wake of George Floyd's murder and the national protests it's generated, Zach streamed the taped version of that show for a week and hosted two more discussions, this time over Zoom. For the second discussion on Sunday afternoon, more than 30 people called in to share their thoughts and feelings about not just the play itself but how the play looks in the present moment. Some of its lines about systemic racism and inequity resonate much more powerfully in light of recent events.

Zach Artistic Director Dave Steakley opened the discussion by referring to another show, the musical Caroline, or Change, which he directed in 2008. He quoted its refrain "Change come fast and change come slow, but change come," then said, "We're living in a moment, in which it feels like there's the potential for many things to change. Here we are today with an opportunity to use Anna's play as a springboard for deeper conversations ... [on] moving forward in a meaningful way for change."

The deeper conversations started in four breakout rooms, each with a facilitator guiding the discussion. Feelings certainly ran deep, even among members of the Zach staff on hand. Managing Director Elisbeth Challener said that even though she had seen the live production multiple times last year, watching it online "in the times that we're in" was harder, and it left her "devastated." In looking at what might come out of this moment, several participants wavered between doubt and optimism. LuAnn Toney expressed her concern that this might be another one of those "flash fires" that gets the public "up in arms" only to fade over time with no progress. "But this seems a little different," she added, noting "a confluence of incidents and public sentiment and political timing" that might maintain this momentum so "some real change can be fostered."

But real change can't happen without involvement from everyone – white people, too. Participants of all races offered suggestions for steps forward, from books and films that people could learn from (Ibram X. Kendi's Stamped From the Beginning, Ava DuVernay's 13th) to organizations they could support (Communities of Color United: Coalition for Racial Justice, Undoing White Supremacy Austin). White people were encouraged to be allies by both listening to people of color (who are tired of not being heard, one noted) and speaking up when they encounter racist behavior by other white people. Any action, though, must be motivated by the right reason, an honest desire to make real change. As Jillian de la Rosa put it, "Any of us, whether we're donating, whether we're joining coalitions, joining groups, reaching out to people, that intention has to be in every single thing we do."

As the 75-minute dialogue was ending, Nico Ramsey weighed in with a final idea for change. "So often we talk about what we're wanting is equality. I encourage you to think beyond equality, because I can have the same exact rights as you, but if I don't have equity...." He cast it in terms of a grocery store with organic food; it's in a part of town that's easily accessible to some but not to others. "Yeah, it's there, but I have to hop on two buses and a train to get there when you can walk outside your door and get everything you need to get healthy, to have a good education. Are you putting road blocks in my way?" he asked. "I think we're far past the question of equality for all. It should be equity for all."

A version of this article appeared in print on June 19, 2020 with the headline: A Year Later, the Time Is Right for Another Talk About Zach Theatre’s Notes From the Field