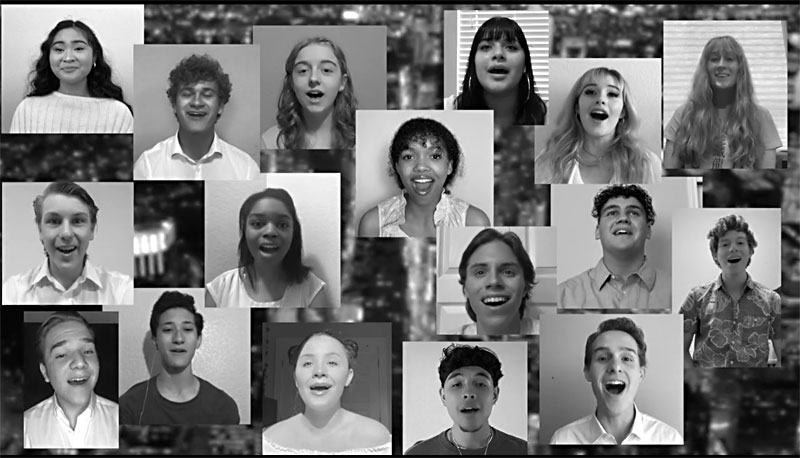 The Greater Austin High School Musical Theatre Award show is like a mash-up of the Tony Awards and the NBA All-Star Game for young thespians. More than 2,000 adoring classmates, teachers, and family members gather at the Long Center to cheer on outstanding productions, performers, designers, and technicians from 33 schools in Central Texas. During the show, the energy in the auditorium is palpable. Everyone present is excited to witness a moment of greatness.

Since the inaugural GAHSMTA show in 2014, the spring production has been a time to dress in formal attire, celebrate community, and be inspired by the hard work and dedication of local high schoolers. Throughout the year, their efforts in musicals from Les Misérables to Freaky Friday have been reviewed by volunteer adjudicators from the Long Center, who have nominated them for awards in categories such as Best Orchestra and Best Choreography.

For the show, students from every participating school are asked to perform as members of the select ensemble. In coming together to rehearse musical numbers and choreography created specifically for the awards, they develop connections with other young people who are equally passionate about the arts. "One of the goals of the Long Center was to make sure that the value was placed on community-building rather than pitting schools and students against each other," says Ginger Morris, Long Center director of outreach and education.

Morris has been a member of the production team that has orchestrated the show since its inception. She says the show is special because it highlights student achievement and raises awareness about the work taking place at local schools. Much like prom or graduation, the GAHSMTAs are a memorable and highly anticipated part of a theatre student's high school experience.

This year, the awards show will take on a new form. Due to concerns about the novel coronavirus, which postponed the 2020 Tonys and canceled NBA games midseason, GAHSMTA will not take place at the Long Center. Instead, it will be broadcast worldwide on YouTube Premiere on Sun., May 31. The production will consist of pre-recorded musical numbers and night-of Zoom interviews with award recipients.

Originally, the production was scheduled for April 15. But in mid-March, with rumors of cancellation looming, the Long Center staff began to discuss transitioning the event from an in-person to an online format. Morris says that in an effort to preserve the spirit of the show, the team wanted the students to feel as though they were participating in something bigger than themselves, instead of simply having the names of award recipients announced.

Early on, the production team met via Zoom to storyboard what the show would look like, develop a list of shots for students to record at home, and discuss rewriting the opening musical number to address the reason for the pivot to online, i.e., the global pandemic. With a plan in hand, the team began hosting Zoom rehearsals during which students in the select ensemble had to learn complicated a cappella harmonies and tips on capturing their filmed segments in the best lighting. "It was definitely a learning experience for us to [figure out] the best way and the clearest way to teach something in this medium that isn't too overwhelming," says Sara Burke, Morris' creative assistant and member of the production team.

Chloe Matyis, a Crockett High senior, says that early rehearsals were "clunky." There is a world of difference between learning song and dance numbers while sharing in the collective energy of being in a room together and attempting to sing a cappella to a large group using a digital platform. "You feel like your voice is going to be altered and the timing is always weird, so it's definitely nerve-racking," Matyis said.

Although the rehearsal process came with a learning curve, Matyis is grateful that the show came together. With all the discouraging news about prom and graduation cancellations, it's a relief that one school tradition will still go on. And compared to years past when the energy of the show was only preserved in the memories of the performers and audience, she'll be able to look back on the recorded production for years to come.

Composer/writer/director/performer Allen Robertson, who composes the show's opening and closing numbers and is this year's show conductor, says he is excited that the online format will allow people who live out of state or might not have been able to get a ticket to the show in the past to witness the production. The multifaceted writer, director, and performer said he is looking forward to his mother watching the show. In the past, he says, she hasn't been able to see the GAHSMTAs in person. This year, though she's self-isolating and Robertson hasn't seen her in over 10 weeks, mother and son can finally enjoy the awards show together through a shared virtual experience.

Although nothing compares to performing on the Long Center stage, Robertson is glad to have been part of this creative team that put the show together. "How it will be received or the smoothness of its art has yet to be seen," he says. "[But] the brave experiment of it is heartwarming. I can say its creation was nothing but light that's been thrown out into the world."

A version of this article appeared in print on May 29, 2020 with the headline: From Center Stage to Center Screen