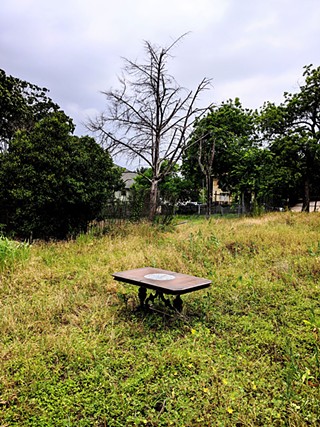 Untitled by Amy Scofield, East Austin, May 5 (Courtesy of Northern-Southern)

We know the art is out there. We just can't get to it.

In the age of the pandemic, with every gallery and museum closed to the public for weeks that feel like years, we're offered tantalizing images of paintings and sculptures and installations on websites of arts institutions, affirming those works are still there behind locked doors, but we have no way to be with them, to be in their physical presence, to take in the full measure of their artistry, their message, their impact. They're on our screens, sealed away as if by a plate glass window, beyond our reach.

Northern-Southern Gallery's group show "Left in Leaves" provides a touch of relief from this frustrating state of affairs. Gallery owner/curator Phillip Niemeyer invited a baker's dozen of local artists to free some of their art from lockdown and set works in assorted sites around the city for viewers to either seek out or stumble on in their rare ventures outside. Some pieces are in the urban environment: a neighborhood park, a vacant lot, a suburban curb. Others are farther afield, deep enough in greenbelts that hiking is required to find them. Where they are, though, may not be what gives the pieces here an impact beyond the usual. This is far from the first time that art has been placed outdoors or left to be discovered by unknowing passersby. These works, however, arrive in a time when our access to art has been so limited, so restricted, that its absence has been noticeable – palpable even. Thus, "Left in Leaves" speaks to this specific moment, to our longing to connect with art, and gives us a means to make that connection, even if only for an instant, somewhere we might not expect.

The fact that we have to go in search of this art, to follow maps that lead us down alleys and up trails we may have never traveled before, ending in destinations far from any gallery or museum we know, adds to the exhibition's allure. If we're missing art this badly now, then by God, let's go after it. The first work I went hunting for took me into the Blunn Creek Nature Preserve east of St. Edward's University. As I followed the directions drawn by artists Meghan Shogan and Danny Hernandez, fording the creek, pushing through brush, and weaving through boulders on my way to the work, I was taken by the profound difference between this setting and most places where art is seen: spaces contained, constructed, smooth and even. Here was space not only wild but filled with its own art, unrestrained in color, shape, variety. Whatever art was at the volcanic overlook, the path there had offered its own artistic fulfillment. What it turned out to be – and I apologize for the spoiler – was a simple brick set into the ground, and on it were carved the words, "If you lived here, you'd be home by now." The title, Real Estate, clicked, and I had a good chuckle. But as I took in the gorgeous vista that afternoon, I felt I'd gotten more than a punchline. If I did live here, how much of this preserve would have been sacrificed to development? And who did live here? A lizard on a boulder gave me the side-eye as a butterfly flitted past and birdsong celebrated the day. The way down the trail, everything I saw – the bushes, the birds, the massive, ancient trees – was filtered through the concept of home. I suspect I would not have been affected that way by a work in a man-made space.

North of the river, my mind was turned in a similar direction by an untitled piece by Amy Scofield. In a lot facing East Seventh, vacant save for the weeds and overgrowth that had claimed it, was a large wooden table, its thick legs and ornate carvings testaments to its age. But its cracked and peeling wooden surface showed that the sun and weather were having their way with it. On that surface were scores of reflective beads, most assembled into a silvery circle that might have stood for moon or sun, but on that blazingly bright day – Sunday, of course – when the beads' light dazzled, it was difficult to picture it as part of the night. The table looked out of place in this empty space, but who's to say it didn't belong there, the remains left by some earlier resident of the lot, another part of Eastside history lost to the neighborhood and to the city? Who could that space have been home to, and whose home is it now? Whose home will it be?

"Left in Leaves" invites us to ask such questions by seeking out works of art in spaces where we live and don't live. In this time of yearning for a connection to art, it can provide one – and connect us to even more.

Various sites around Austin
www.northern-southern.com
Through May 31 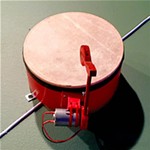