Writers Conference in San Antonio Carries On Despite Coronavirus "There are liabilities on both sides of the issue," said Cynthia Sherman, director of conferences and co-director of the Association of Writers & Writing Programs – the issue being whether or not to hold AWP's annual conference in San Antonio, March 4-7, even as the mayor declared a public health emergency after the Centers for Disease Control and Prevention permitted an American evacuee from Wuhan to leave quarantine at Joint Base San Antonio-Lackland; shortly afterward, they tested positive for the coronavirus.

The decision to go ahead with the conference was made, Sherman said, in close consultation with the mayor's office and "on behalf of small journals and presses who invested" in the sales and marketing opportunities of the conference. The move has not been without fallout: Sherman's co-director, Diane Zinna, resigned to protest the decision. And of the typical 10,000 attendees and exhibitors at an AWP conference, fewer than half came to San Antonio. About half of the programming was canceled.

For Jenny Zhang, an Austin poet who read to a full house at the Amp Room, the decision to attend wasn't hard: "Ultimately, it's an hour away. Any major city is on high alert."

The drive down from Dallas was worth it for Matthew Limpede, publisher of the literary magazine Carve: "This is the one time we get to meet face-to-face with subscribers, volunteers, staff, and fans."

Writers and publishers who would have traveled to San Antonio by plane were not as on board. Explaining The Believer's decision not to make the trip from Las Vegas, Deputy Publisher Kristen Radtke wrote via email, "Since we're housed in an international creative writing program at UNLV [University of Nevada, Las Vegas], we decided to be extra cautious not only for ourselves but for the larger university community of students and staff." But forgoing the conference gave the magazine's staff a feeling of loss: "I think we're all mourning not being a part of this year a little."

Mourning was much discussed at a panel titled "Havoc and Healing: Intersections of Creative Writing and Science." Poet and University of Missouri at Kansas City professor Hadara Bar-Nadav addressed the paradox of contemplating the nexus of medical science and creative writing at a meeting held in a city under a public health emergency declaration. "It's more essential than ever to talk about the language of medicine," she said. The poems she read consisted of language reworked from pharmaceutical packaging, resulting in jarring lines such as, "Take an axe to your tongue, you should begin to feel better," and, "Swallow your heart, swallow it with applesauce."

Bar-Nadav intends these erasures, or found poems, to address what she experiences as a deliberate divide between information provided by medical writing and the attention needed by sick people – and citizens amid a mounting pandemic. Addressing the juxtaposition of a writing conference in a time of coronavirus, Bar-Nadav concluded, "I'm contributing to the spread of talking about the language of healing and caring."

A co-panelist, Erin Adair-Hodges, poetry editor of Pleiades and professor at the University of Central Missouri, read a poem about how postpartum depression had left her with "a drawing of a heart for a heart." She and the other panelists made ready reference to canonical writers such as John Milton, Virginia Woolf, and Susan Sontag, as well to contemporary writers such as Sarah M. Broom and Leslie Jamison. It was, as one attendee commented, "a flamboyant display of erudition and poise," the very thing that draws passionately literary people to AWP – people who literally can't stay away. 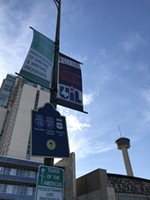