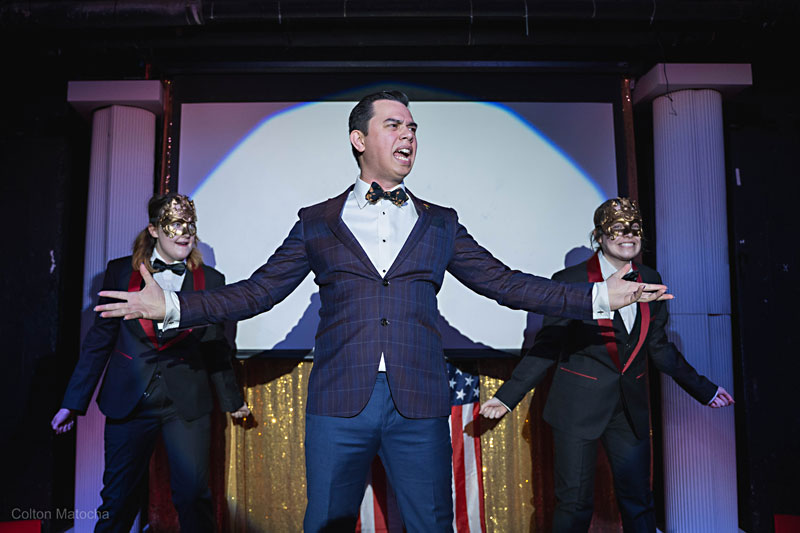 Remember when all the neighborhood kids got together and staged a play for the parents? Everyone got an equal role in a chaotic variety show where you probably ended up wearing your dad's oversized blazer and your mom's slip as a hat. It was bonkers and disorganized, but everyone had a blast giving their heart and soul to their kooky characters. The 2020 First Annual Hollywood Awards Show: Live in Hollywood! feels like that, though decidedly more adult. A little messy, insane, and a pinch satanic, it's one wild ride into the sniveling, cocaine-fueled monster hunched under the bright lights of Hollywood.

Halfway through the host's opening musical number, two disgruntled filmmakers (played by Franny Harold and Brett VerVoort) rush the stage, crying foul on the misinterpretation and subsequent dismissal of their film. They've got machine guns, no pants, and a mission. The remainder of the show follows the flustered host attempting to move the ceremony along with presentation of awards, film clips, and speeches. It does not go as planned, what with all the demonic possession and hostages getting in the way.

The 2020 First Annual Hollywood Awards Show: Live in Hollywood! is a lowbrow satire of Hollywood's self-congratulatory awards shows and fantastic denial of its dark side. In light of the preponderance of scandals that Hollywood has coughed up since its inception, there's a plethora of material to pull from. Not one issue here hasn't been covered in editorial think pieces, so these topics feel relevant but unsurprising at the same time.

There's nothing new here – we all know about the drugs, sex, and cults – but maybe that's exactly the point. Maybe within the satire of awards show self-importance, The Hollywood Awards' use of predictable topics symbolizes Tinseltown's archaic notions and practices. The show's screaming obtuseness reflects how many people view Hollywood at the present moment, and I'd bet there are artists who'd love to rush the stage in the Dolby Theatre and hold the tuxedoed host at gunpoint.

This wild adventure lovingly embraces its role as the complete antithesis of the glamorous Academy Awards. With the aforementioned production values of a dilapidated yet charming backyard variety show, the production revels in what would be the nightmare of any big-time awards show producer and giggles at the thought of any of these preposterous situations happening in reality.

Just like Hollywood itself, the surface and the underbelly of this show contradict each other. There's an absurd comedy on the surface and a hilariously truthful look at the legendary industry underneath. Though it's no earth-shattering work of satire, this punch-drunk take on the soulless Hollywood system understands itself, never tries to be anything else, and has an absolute blast along the way.

Fallout Theater, 616 Lavaca
www.falloutcomedy.com
Through March 21
Running time: 1 hr.
A version of this article appeared in print on March 13, 2020 with the headline: Fallout Theater’s The 2020 First Annual Hollywood Awards Show: Live in Hollywood! Terminator: The Musical at Fallout Theater
This is exactly the sort of loving parody of nuclear apocalypse and time-traveling AI everyone should experience at least once