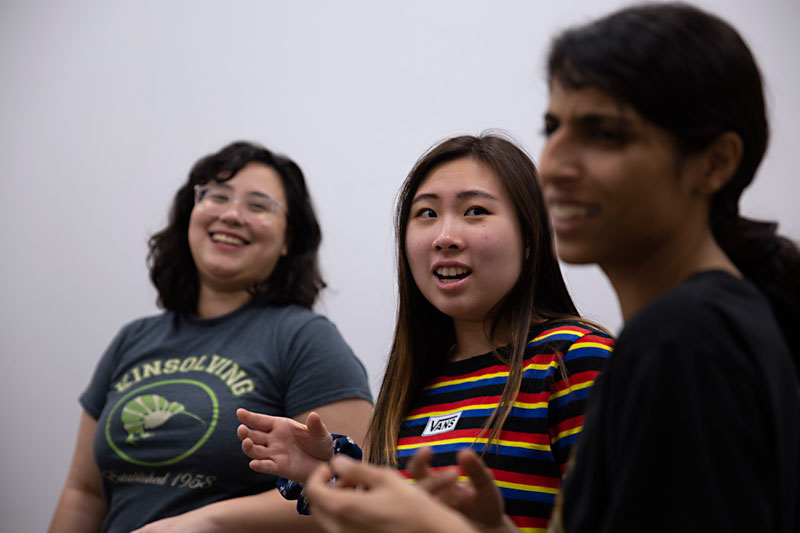 If you see that something doesn't exist, sometimes you just have to make it yourself.

That's the case with Pen – short for Penelope – the lead character in the new play So Lucky. The city she lives in doesn't have a Lunar New Year Festival, and since Pen believes that's a meaningful event for the Asian American community, she steps up and makes one herself.

That's also the case with the play's author, Sandy Lam. The city she lives in – Austin, naturally – doesn't really stage plays about Asian Pacific Islander Desi Americans, and since she believes they're meaningful not only to her but to the entire APIDA community, she stepped up and made one. "I craved to play characters, write characters, see characters who were Asian and had agency and nuance and humor and aspirations. I wanted Asian characters that looked like my friends," Lam says.

Having the organization of a Lunar New Year Festival as a plot point in So Lucky was a natural for Lam, since she had experience doing just that as an undergrad at the University of Texas when she was actively involved with the Asian American Culture Committee and the Creative Arts + Theatre Committee. It reinforced the importance of that event and gave the character of Pen a driving purpose. "[It's] a form of community organizing," Lam says. "No, she isn't fighting to change institutions and policies, but by putting on this event she's asserting that Asians/Asian Americans belong and they deserve to have a space where they can celebrate being themselves and celebrate the things that they value."

"I think it was really smart of Sandy to have this event be a thread and time anchor for the play," adds the production's director, Thanh Bui. "Lunar New Year celebrations in the West are often a reminder of home. Whether they're put on by parent-aged/first generation immigrants missing home on another continent or college students missing home in another city or state, I think the effect is the same in that ringing in the new year with people who look like us reminds us of tradition and togetherness."

As Lam was writing the script and developing those themes of togetherness and community, part of the play began to grow – specifically, the cast. "When I first started writing, I intentionally wrote a small cast because I knew that it would be much easier logistically if we ever did put on the show," she says. "But a recurring theme in the show is community, and it was hard to tell a story about community if we didn't actually have a community of people onstage. And the more I expanded the story, the more I wanted to portray a diversity of Asian American characters."

In the 14 months that it took Lam to finish So Lucky, the number of characters went from seven to 18. Some of that was Lam, but some was what happened when it came time to cast the show. "We had a ton of APIDA talent come out to audition, and it felt wrong to only showcase a select few when the spirit of [our theatre company] Sad Girls Productions is to create more spaces and opportunities for those who don't have them."

Bui admits that having that many people in the show has its logistical challenges. "With a cast of 18, I'm not sure we've ever had a rehearsal where everyone was present. Coordinating everyone's schedules took three screens," she says. "However, it's incredibly worth it to me because there's power in taking up space when we've historically had very little. With So Lucky, we want to be wasteful with representation."

Now that So Lucky is ready to open, Lam has a message for the audience: "If you come see the show, invite your APIDA friends. I think, I hope, that the story will mean a lot to them. I want them to see it. I want them to see themselves somewhere – in a character, a phrase, a facial gesture, a memory, a comment made by a fellow audience member. Invite them to experience that moment of connection."

A version of this article appeared in print on March 13, 2020 with the headline: A Community Onstage