The writing on the wall: Tom Booker at Institution Theater, surrounded by the signatures of past improv students and performers

Add the Institution Theater to the roster of arts venues that are going away due to what's popularly called "market forces." You know: where a city does so well, due in part to the creative scene flourishing among its population, that the resultant success drives that creative scene elsewhere because the artists and organizations involved can't afford the real estate anymore?

The Institution, started by Tom Booker and Asaf Ronen back in 2011, has been a mainstay of the local improvised theatre community – one of the so-called Five Families of Austin Improv – presenting its own diverse schedule of shows, leasing stage space to other performance companies, and offering a rich slate of classes in improv, stand-up comedy, on-camera auditioning, and more. All of that's ending at the end of March. And how does Booker feel about this?

"Oh, it's kind of bittersweet," says the affable teacher, who in 2007 ditched the L.A. actor's grind for a gentler life in Austin. "I understand why we can't be here anymore, but it's a bummer. What's weird to me is that we started with renting just this run-down warehouse that we cleaned up a corner of, and the landlord was sort of, 'Do whatever you want – just pay your rent and don't bother me.' But now we're priced out by a company that was able to raise $90 million to make grain-free chips. And that seems like the story of Austin, the story of Austin in general, over the past eight years.

"So I'm bummed, but I'm also excited – because now it's someone else's turn, you know? When I started 30 years ago, it was my turn. And now – and hopefully it'll be someone who studied at the Institution – maybe someone will be inspired enough to open up their own space somewhere else. Like I was, by a guy named Mick Napier at the Annoyance Theatre in Chicago. And he'd been inspired by Charna Halpern and the people at Second City."

But does this shuttering put a final kibosh on the Institution's esteemed educational programs? For good an' all?

"Well, we're a four-level program," notes Booker. "And right now we have two Level One classes, two Level Twos, and one Level Three. So one of the things I might do, at the very least, is keep the classes going to allow those students to complete the full program. I'm looking around for somewhere that could allow that – there's a potential opportunity with Orf Brewing and their recently enlarged space. And then, after that, we'll see what happens. But, ah, I think it's time for me to do something a little more ... responsible? More financially responsible." He smiles wistfully. "I guess you can't be a bohemian forever." 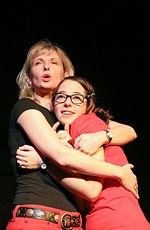