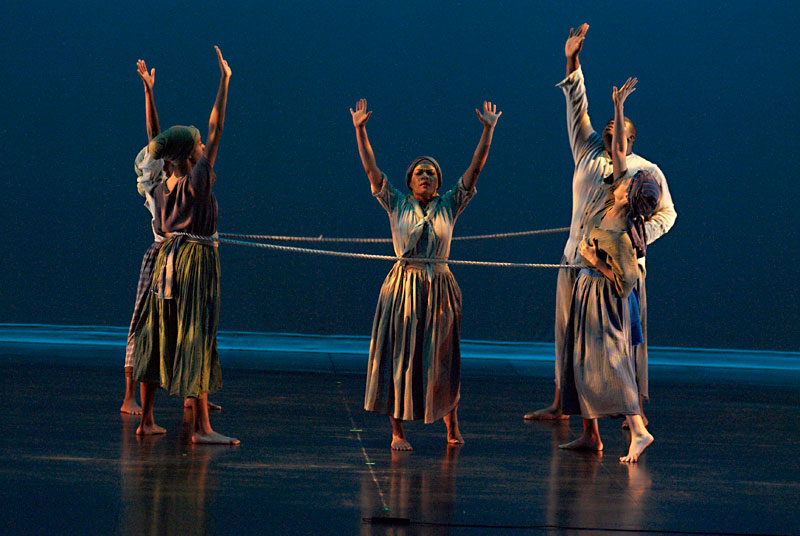 She has, it's fair to say, been walking in her footsteps for a quarter of a century. For in the dance drama Sister Moses: The Story of Harriet Tubman, she is Sister Moses – and has been since Arizona-based Desert Dance Theatre premiered it in 1993. Every year the work has been presented – including this year in Huston-Tillotson University's King-Seabrook Chapel – Davis has taken on the role of Tubman, from her life of slavery and escape from it through her work with the Underground Railroad and, later, the abolitionist movement.

Davis had no intention of staying in the role so long, but when the show was created, neither she nor Marion Kirk Jones and Lisa R. Chow, her fellow co-artistic directors at DDT back then, had any idea how popular it would become. From early on, parents of school-age children who had seen Sister Moses would tell Davis and her colleagues how much the production had affected them, and those with children who had been a part of the show would describe how the kids continued to sing the spirituals featured in the show long after it had closed. The parents called Sister Moses "a life-changing experience" for their children, and performers young and old kept coming back to take part in it again and again. "Without fail, all dancers who have come back to see the show or participate again always express to us their deep gratitude for the experience and their desire to continue being a part of such an important work," Davis says.

As a result, Sister Moses has been remounted every year since 1993 – "We affectionately call it our 'Nutcracker of Black History Month'" – with Davis faithfully reprising her performance, whether the show's been staged in Arizona or Austin, where Davis has been able to produce it a handful of times since she moved to the city in 1998.

In all that time, Davis has never tired of being Sister Moses. She says, "Renee Morgan Brooks, the Narrator/Voice of Harriet, and I often speak of the deep spiritual and emotional connection we feel with Harriet and the weight of the responsibility to portray her story with every fiber of our being. It keeps us going strong and when asked how it feels, our first response is always that it is truly an honor to come together each year to inspire another generation of students or to teach another audience about this courageous woman. Even when I have doubted my ability to continue dancing this role through the years because of natural limitations that aging brings, when I step foot on stage and the first word is sung, all doubts go away as though I'm being lifted and filled with Harriet's spirit and determination to go on. There's no better high than that and sometimes the intensity of the experience brings me to my knees, overwhelmed with tears of joy and gratitude at the end of each performance for having not just the opportunity, but mostly the ability to continue dancing this role at the age of 62!

"Dancing the role for so many years has also taught me about myself and given me the confidence to realize that wisdom, artistry, and experience can still have a valued place onstage in the midst of a culture that is generally focused on youth, on special effects, etc."

While Davis has remained a constant in Sister Moses through the years, the production itself has changed with almost every performance. That's because the creators made space in it for individuals and groups outside the company to contribute to the show. "We designed certain sections to include walk-on roles for extras, along with local dancers, singers, and musicians in the various communities where we perform," says Davis. "Sister Moses has always been a popular residency opportunity for the dance and choral music programs of Arizona high schools and community colleges. Once, we did a residency that added 80 students to the show, but we successfully found a role for all, even when we had to dress some women as men! Through it all, it's very important to us to emphasize that each performer's role, no matter how small or large, is very relevant in telling Harriet's incredible story, just as Harriet couldn't have been successful without the help of the Freedmen and the Quakers, who did not believe in slavery. Our intent is to let our guest performers know that there are no 'stars,' so they feel a sense of camaraderie, empowerment, and pride in being part of our Sister Moses family."

In addition, since Sister Moses runs just 45 minutes, Desert Dance Theatre now devotes the half of the program before its presentation to performances around the theme of Black History Month. "The beauty of this plan is in the flexibility it provides to present a varied program each year though Sister Moses remains the same," says Davis. "We invite our guests to present historically significant works that are relevant to our concept of highlighting Harriet Tubman as the inspiration for those who followed in her footsteps, such as civil rights activists like Dr. King." In the past, guest performances have included a jazz pianist playing a composition inspired by Langston Hughes' "A Dream Deferred," performances by capoeira dancers, a presentation of African dance by Austin's Ballet Afrique, and the Huston-Tillotson Concert Choir singing the spiritual/protest song "Woke Up This Morning With My Mind Stayed on Freedom."

"Our goal," says Davis, "is to provide a mindful presentation that is intentionally thought-provoking, meaningful, and inspiring enough to motivate a change in action and thought patterns!"

If Davis has her way, she'll be walking in Harriet Tubman's footsteps for many years to come. She aspires to make Sister Moses an annual event in Austin as it has been in Arizona, where children who saw it decades ago have grown into adults and now share it with their children – and even take roles in the annual revivals. "One of our current Austin dancers, Lindsay Bond, will be participating for her third time, but now as a new mom. Her first year was in 2000 as a high school teen where she danced at Tapestry with my daughter. She came back to Austin last year after many years away and jumped at the chance to do it again. Another current Austin dancer, Daniele Spivey-Sorrells, director of Mercy Moves Liturgical Dance Company, performed Sister Moses for the first time during our 2010 Austin tour and is now back after being married with children.

"My own children are also perfect examples because my 36-year-old daughter Sakeena was the original 8-year-old slave child we sold in the auction scene. When she outgrew the part – and the costume – and graduated to more challenging roles, she taught it to her 5-year-old brother who is now 28 years old and just recently earned his graduate degree in Engineering. We are now trying to encourage my 7-year-old granddaughter to be in the show with no success so far! We are still keeping Sister Moses as a family affair as my daughter and I continue to travel back and forth to Arizona performing alongside each other. She will also be seen in the Austin performances."

Davis sees Sister Moses' message making a difference: "Dancing the role of Harriet has positively shaped my dreams and possibilities for the future at a stage of life when I fully expected to have retired from dancing after raising my family. Her spirit inspires me and should be a role model for all because of her humility, selflessness, and determination in the face of adversity to 'do the right thing' regardless of personal risk. Something I hope students and audiences will walk away with is a sense of empowerment and determination knowing that 'If she could do all that she did with a severe head injury that caused narcolepsy, then I/we should be able to do anything without excuse!"

A version of this article appeared in print on February 7, 2020 with the headline: Steps to Freedom

Who's Responsible for Financial Aid Woes at H-T?
Students frustrated by delayed aid