This re-created rock concert with the legendary singer is so good, it may be better than the real thing 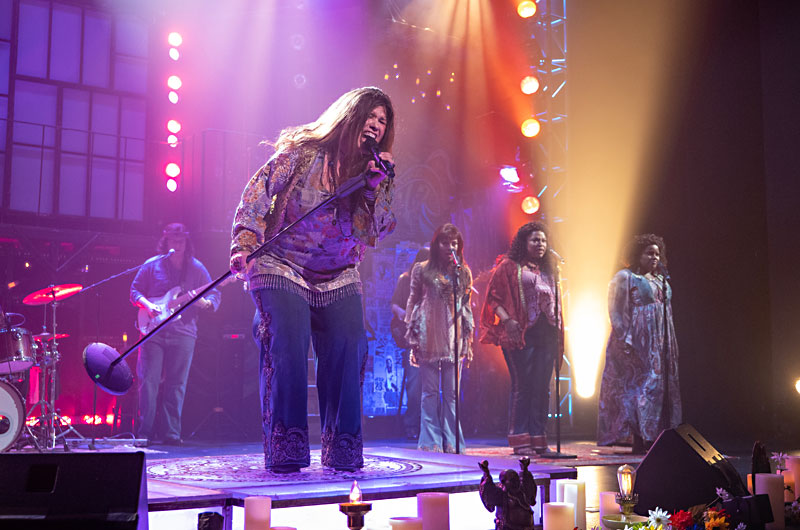 There's something I've never said in all my years of reviewing theatre, and as my editor is my witness, I'll never say it again. Here goes: All the criticisms I can offer of Zach Theatre's A Night With Janis Joplin don't matter. If the audience is moved to tears of joy and people are on their feet celebrating, then something special is happening, and maybe that's okay.

At a recent preview performance, people in the audience sang along, clapped, danced, and cheered. They were pretty well on board from the beginning, but once Janis (Mary Bridget Davies) sang the first notes of "Piece of My Heart," the deal was done. A glance around the house showed over a hundred faces being thrown back to what must have been some amazing memories with that song for a soundtrack. (Do we want to know? Possibly not.) Even my guest – someone not inclined to clap and sing along at a rock concert – was on her feet.

A lot of this is due to Davies' turn as Janis. You can quibble with how much she looks like her or whether her physicality is spot-on, but for real, y'all: that voice. She nails it. How exactly she manages to nail it night after night without killing her instrument? No idea. In fact, she sounds more like Janis than Janis did live. Davies – who was nominated for a Tony Award for her performance of the role on Broadway – takes your every memory of Joplin's recorded music and gives a live performance so good, it may never have existed in reality. (That's according to YouTube, because I'm too young to know firsthand. Yeah, boomers.)

The show features not just Janis, of course. It also gives us the amazing music of some of the women who influenced her, Black singers who were geniuses in their own right. To some ears, these ladies ought to have the show to themselves. That's no slight to Davies but a nod to how remarkable the other women are – both in life and as embodied by the performers who sing with Davies in this production. Starting with "Tell Mama," when Etta James (Tawny Dolley) struts back and forth upstage, it's a great reminder that Janis wouldn't have been Janis without the jaw-dropping talent of many Black women singers. With any luck, the creators of A Night With Janis Joplin will give us A Night With Aretha Franklin soon.

As a play, A Night is distinctly less than. The dialogue is thin, the plot nonexistent. Janis recites details from her life like an eighth-grade book report. The depression and addiction that led to her early death are all but unaddressed except with a few swigs from an onstage bottle.

But maybe it's not really a play. Maybe it's a glorified Janis impersonation, without apologies.

And you know what? That's okay. It really is.

A Night With Janis Joplin