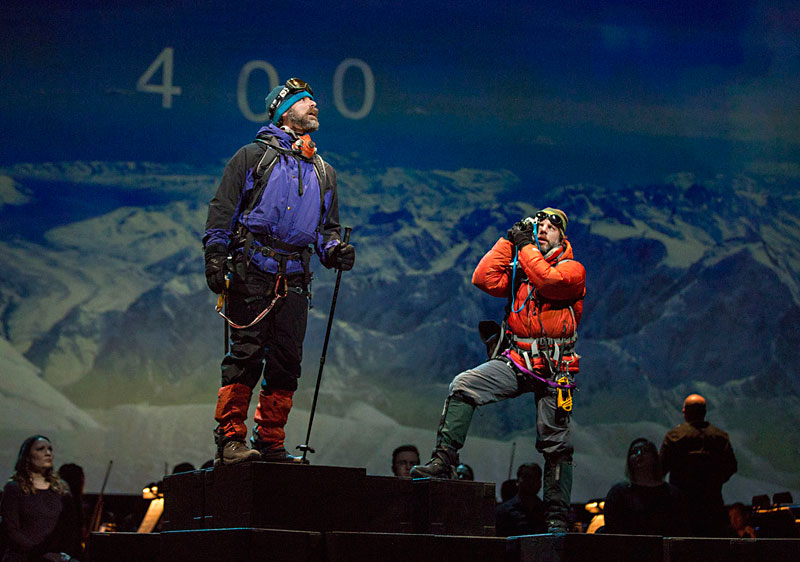 Opera, I've come to find, is defined by its ability to usher audiences through powerful, universal emotions. In return, the medium simply asks us to empathize – to feel. When done correctly, we need only sit back and let a production's elements take us on a journey. If this was in fact Austin Opera's goal, I'd say it reached the top with Everest.

The company's latest production recounted the 1996 Everest tragedy, wherein an unexpected blizzard claimed the lives of eight climbers. A tale of loss and perseverance, Everest hits all the emotional beats you'd expect – and goes a step further.

Here's a show marked by its visceral effect on audiences. According to composer Joby Talbot, during the show's original Dallas run, one audience member – ostensibly feeling trapped on the mountain – began screaming. Similarly, here in Austin, as our heroes struggled for oxygen, so too did my plus-one, who began frantically reaching for their inhaler 10 minutes in. An overreaction, some may think, unless they too had experienced this impactful showing.

Onstage, our neon-clad leads weren't so much valiantly conquering the mountain as becoming hopelessly trapped by it. They were bombarded by the music of the upstage orchestra and a black-clad chorus – representing souls previously lost to the mountain – moaning and chanting.

From Talbot's leviathan of a score, conductor Joseph Mechavich teased the unsettling groans of bass drums, summoned blaring brass, and even employed multiple vibrating gongs, all to suggest natural phenomena (e.g., ice cracking). Contextualizing Talbot's composition was librettist Gene Scheer, whose tireless research of the event (including hours of interviews with survivors) manifests in a world where time means everything and nothing. On Everest, being minutes off-schedule can mean death. As the chorus recounted time passing – first slowly, then quickly – it felt like an hour had slipped away in the real-life space of two minutes.

Binding these elements together were powerhouse lead performances. As ill-fated expedition leader Rob Hall, Andrew Bidlack's bright tenor carried the burden of his fatal decisions, singing apologies directly to client climber Doug Hansen (baritone Craig Verm) and, heartbreakingly, over the radio to his pregnant wife, Jan Arnold (soprano Heather Johnson). On the other side of the stage, bass-baritone Kevin Burdette captured the big-as-Texas personality of survivor Dr. Beck Weathers as the Dallas pathologist exerted the herculean effort necessary to save himself after being left alone far from base camp.

I understand why certain audience members had visceral, physical reactions. For me, how­ever, the hopelessness of our protagonists' situations filled me with a certain peace. I never gasped for breath or felt (overly) uncomfortable. Instead, I surrendered to the experience.

Ultimately, Everest offered audiences the two choices it afforded the adventurers that fateful day: panic and resist, or accept a warm, slow death (which, Scheer reminded us, is as "simple as falling asleep"). Perhaps having the latter reaction means I shouldn't attempt to scale the mountain myself. Fair enough, since I don't feel I have to. Austin Opera has already taken me there – and it was a hell of a trip.

A version of this article appeared in print on January 31, 2020 with the headline: Austin Opera’s Everest