I, for one, welcome our totes adorbs steampunk overlords 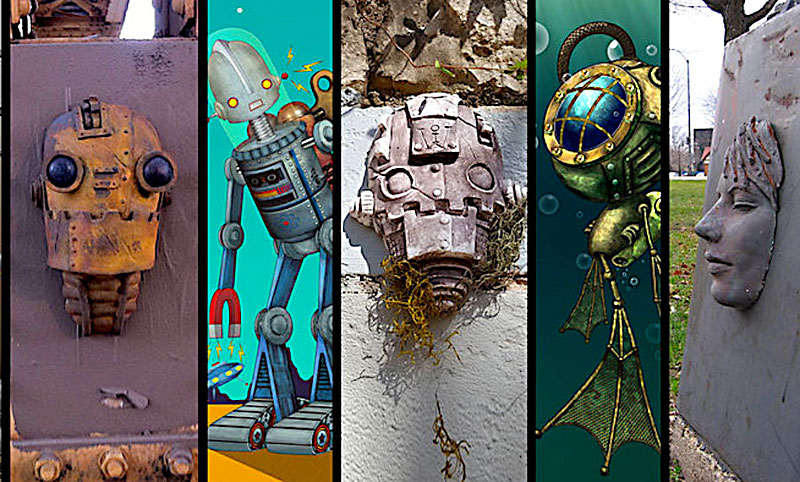 Ao5 Gallery is so named because it used to be Art on Fifth, back when it was – as opposed to an art gallery on South Lamar Boulevard – an art gallery on Fifth Street. The business moved south of the river years ago, into bigger and brighter digs, but retained a vestige of its former cognomen via initialese – much like the future keeps a vestige of itself even when retconned into the past for reasons called "steampunk."

Follow my path of thought, and follow me also to Ao5 Gallery, where there's now a show by the Impossible Winterbourne adding its skiffy charm to the venue's usual array of painted pop culture homages and Hollywood-inflected postering and, as ever, a veritable wonderload of items from the estate of the late Theodor Geisel.

The Impossible Winterbourne, yeah. A local, this creative creature, although also an international street artist whose work can be found in various metropolitan hubs across the globe. Enigmatic AF, a somewhat low-rent and more Gernsbackian Banksy, he's the living avatar for whichever human is inside that big ol' cube of a mask that's worn above a stylish suit that wouldn't look out of place in a Steam Powered Giraffe video. Winterbourne is best known for his robot heads – those three-dimensional sculptures of servomech physiognomy, bright and cartoony and well-crafted, each about the size of half a cantaloupe (some a bit bigger, some slightly smaller) – that he affixes permanently to sections of urban infrastructure.

"Mr. Winterbourne uses his gifts to ignite the sense of magic and mystery inside of us, and make us look at our surroundings in a different light," says his website – a delightful thing to visit and highly informative, although the fellow's texts could use a bit of proofreading. "The great thought Winterbourne gives to the placement of his street art installations," the description continues, "ensures they are adding to (rather than subtracting from) the environment they are placed in." We definitely concur with that. It's a rare and cherished treat to discover, among the usual scrawls of Sharpie'd tags and the shredded disarray of cheap-ass stickers defacing some public alcove or structural outcropping, what seems to be the metal face of an old-school mechanical man jutting all shiny and chrome from the gritty surface.

And now many of these adorable sculptures are on display at Ao5 Gallery, along with Winterbourne's paintings of odd steampunk tableaux and prints from his new book. Yes, this exhibition is also a debut sales point for the man's AlphaBots, a full-color, coffeetable-ready compilation of original robot images – quirky and ingenious and redolent of Victorian servo-thaumaturgy – that illustrate our language's letters from A to Z. We think this book is perfect for any modern, robot-loving kid, even if they don't know who Jules Verne is, and for any modern, robot-loving adult, even if they're not Buzz Moran.

Upshot: A visit to this show will likely spread a smile across your jaded, city-dwelling face. And you can see all the other eye-dazzling things on display at Ao5, too, which might be your particular cup of aesthetic tea, and please tell the ghost of Dr. Seuss that we said, "Howdy," okay?