Orion Weiss played Rachmaninoff's Third Piano Concerto with the ASO, and we were spellbound

There is an occurrence common to viewers at fireworks displays as ever more spectacular flashes of light and color fill the sky: At some point, the spectacle will go so far beyond their everyday experience, it will be so extraordinary, that those watching can only go stock-still, mouth agape, and stare. They are transfixed by the wonder of it.

I feel confident saying that such an occurrence was common among the 2,000-plus people in Dell Hall this past Saturday night during Orion Weiss' performance of the Rachmaninoff Piano Concerto No. 3. The pianist's handling of the work's outrageously showy and demonically difficult solo passages – each more grand and technically grueling than the last – was so clean, so sparkling, so virtuosic, that as he charged through them, fingers racing at superhuman speed from one end of the keyboard to the other, hand over hand, hand on top of hand, sounding out scores of notes in blindingly swift cascades that grew increasingly intricate (ever more spectacular flashes of color and light), after a while, all one could do was sit dumbstruck and gawp.

We were transfixed by the wonder of it.

Such an awe-inspiring performance wasn't something that could be guaranteed going into the concert. The "Rach 3," to borrow classical pianists' shorthand, has a notorious place in musical lore. It's so formidable and taxing – a full 45 minutes of these impossibly complex runs – that the friend to whom Rachmaninoff dedicated the work never played it. Among pianists, some fear it; some fail to conquer it; at least one was broken by it. (That story was told in the film Shine, a fictionalized version of David Helfgott's life.) And though now numerous pianists have come to master the concerto, it's no more a sure thing when the "Rach 3" appears on a concert bill than when a Ferrari shows up at Le Mans. (See also Ford v Ferrari.) Much can still happen to throw off a performance, if not on the technical end, then on the emotive end. For all of these piano pyrotechnics are embedded in a composition that's deeply Romantic, demanding a profusion of Big Feelings.

But just as Weiss rose to meet every technical challenge the "Rach 3" threw in his way – even on the fastest runs, he kept the notes spaced just so, each one crisp and distinct – he also satisfied all of the work's emotional needs. When the concerto took a breath, the tempo slowing, Weiss added a kind of lyrical weight to the notes he played, making them full with a wistfulness or yearning that would linger just above the keyboard for an instant after they were sounded. And he brought that feeling back again and again, and when necessary – as in the concerto's final moments – transformed it into something large and grand, a majestic expression of soulfulness.

The Austin Symphony Orchestra was with Weiss all the way, providing the crucial emotional underpinnings for his dramatic explorations. Conductor Peter Bay drew a lush and expansive sound from his musicians, the better to support the outsized ardor and longing coming from the piano. Swelling strings beautifully boosted the passion. A lonely oboe heartrendingly extended sympathy. And when the piano raced, eager percussion and brass leaped in with staccato beats that quickened the pulse. All eyes were on Weiss, but Bay and the ASO made his triumph all the richer.

The orchestra did have the spotlight to itself for the program's first half, playing Brahms' Piano Quartet in G Minor as orchestrated by Arnold Schoenberg sans piano. That work stood in sharp contrast to the "Rach 3"; if the Rachmaninoff might be described as a sometimes hectic rush through a baroque palace, then the Brahms was more of a leisurely stroll through a country village. Its measured tempi and recurring lyricism have a pastoral quality – as if there's a rolling countryside always in view. The march that shows up in the third movement could be from a military band on the town square's bandstand. And the orchestra's performance leaned into that sensibility, with a sound that was somewhat soft and civil, almost as if Bay was reining them in out of a sense of small-town decorum. It wasn't until the fourth movement's Hungarian-influenced dance theme that the ASO loosened up and gave us a rowdy festival celebration on that village green. That section built to a rousing finale that set the crowd up for the thrills to come after intermission.

Though I'm not sure anything could have set us up for the wonder.

A version of this article appeared in print on January 17, 2020 with the headline: The Wonder of It 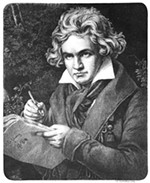