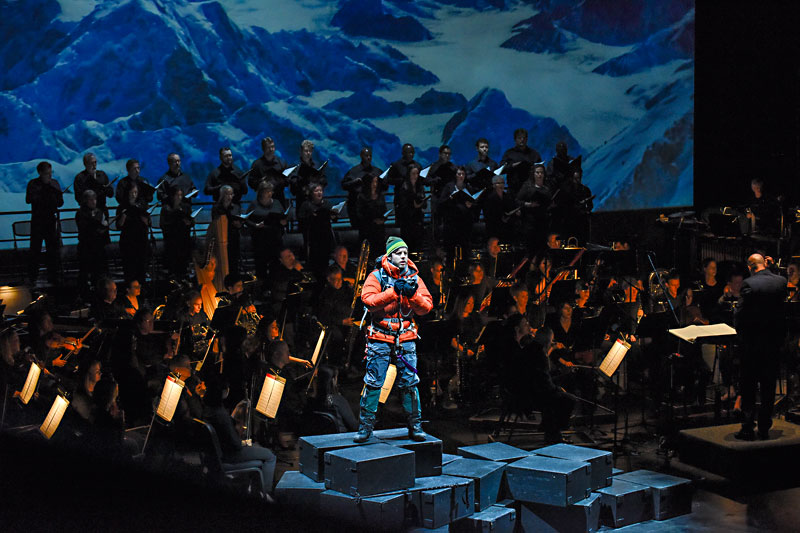 In the distance, snow-covered mountains stand in a jagged line. In front of them are climbers in full gear: parkas, boots, caps, goggles, and oxygen masks around their necks. They move slowly, with care. They gasp for breath. And then they ... sing?

Yes, improbable as it sounds, they sing, because composer Joby Talbot and librettist Gene Scheer have taken opera to new heights – literally – in Everest. Their 2014 collaboration, based on actual events, takes place on the world's tallest peak at a time when climbers nearing the summit were caught in a blizzard that proved deadly. Eight climbers lost their lives, one of the highest death tolls recorded on Everest in a single day. This was the 1996 incident recounted by journalist Jon Krakauer – who was on that climb – first in a feature for Outside magazine, then in the nonfiction bestseller Into Thin Air. The tragedy inspired six other books by survivors, as well as four documentaries and two docudramas. Why not an opera?

“I think [Everest] is one of the most compelling operatic works written in the past decade.” – Austin Opera’s Annie Burridge

Scheer and Talbot saw the theatrical potential in the story. Its setting was not only inherently dramatic, but it also tested the limits of physical endurance. Every step required an act of will, and one wrong move could be truly one's last. Throughout their ordeal, the Everest climbers faced all of those life-or-death decisions in the moment. Some persevered heroically; some paid the ultimate price. And the impact of their actions was felt off the mountain as well as on it, by the climbers' loved ones. That may be why, when the two were discussing potential projects to fulfill a 2012 commission from Dallas Opera, this tragedy on Everest was the one they kept returning to.

Once the collaborators settled on the subject, Scheer went to great lengths to learn all he could about the events of 1996: studying the literature, watching the films, and even interviewing survivors and family members of those who died, wherever in the world they might be. One survivor of particular significance lived right in Dallas Opera's backyard: Dr. Beck Weathers, a climber who was left alone while the rest of his team headed for the summit and who, when they didn't return, walked back to base camp on his own. Though he suffered such severe frostbite that he lost his right hand, the fingers of his left hand, parts of both feet, and his nose, Weathers has said the experience pulled him out of depression and helped his marriage. Weathers became one of the three climbers who are characters in Everest. (The others are Rob Hall, the leader of the Adventure Consultants team, and Doug Hansen, a client.)

Everest received its world premiere in 2015 and garnered praise for the tension and power of its story and for Talbot's "gorgeous," "stirring" score. More than one critic predicted that it would become part of the operatic canon. Austin Opera General Director and CEO Annie Burridge and Nathan DePoint, senior director of artistic operations, were affected just as strongly when they caught a special one-night-only encore of Everest in Dallas two years later. "I think it is one of the most compelling operatic works written in the past decade," says Burridge. "Joby Talbot and Gene Scheer have crafted a work that exemplifies what opera does best: communicate intensely personal moments on an epic scale."

Ever since she saw it, Burridge has wanted to bring Everest to Austin, and this month she does, with much of the original Dallas production coming along. That includes the costumes by David C. Woolard; the vivid scenic projections by Elaine J. McCarthy; and cast members Andrew Bidlack (Rob Hall), Kevin Burdette (Beck Weathers), and Craig Verm (Doug Hansen), all working under the world premiere's stage director, Leonard Foglia.

But while Burridge is drawing heavily on Dallas for this Everest, she's very much aware that she's bringing it to Austin – book-loving, film-happy, fitness-mad, tech-savvy Austin. To that end, Austin Opera has partnered with what looks to be more local businesses and organizations than it ever has on a single production, all to get audiences for Everest more engaged. Earlier this month, BookPeople offered a free copy of either Krakauer's Into Thin Air or Weathers' first-person account Left for Dead to the first 200 customers who came to the store with proof that they'd purchased a ticket for the opera; the Austin Public Library's Twin Oaks Branch hosted a book club to discuss Krakauer's book; Alamo Drafthouse held a special screening of the 2015 film drama Everest, starring Jason Clarke as Hall and Josh Brolin as Weathers; and Whole Earth Provision Company hosted a presentation about the opera with a short performance by cast member Matthew Treviño.

But the activities aren't stopping there. During the opera's run at the Long Center, Portable Adrenaline is setting up an outdoor climbing wall on the terrace where patrons can harness up and play at summiting. Tech firm Subvrsive has developed an augmented reality (AR) app for the production program that, when on, shows the climbers' routes up Everest and provides sounds of wind and snow to heighten the mood. And in the Austin Opera Lounge on the Dell Hall mezzanine, a HALO photo booth from MYEVENTISTHEBOMB will offer a range of backgrounds and visual effects to place you on Mount Everest without you ever having to take a step.

Of course, the excitement of these tech features notwithstanding, what you can count on to really place you on the mountain is the opera itself: Talbot's musical evocations of the merciless wind and cracking ice; McCarthy's projections of frozen terrain; and the performers' depictions of its effects on the climbers – shivering, struggling to move, gasping, hallucinating.

It's worth noting that this Everest comes from Austin Opera, which has delivered some of its most powerful and involving work with operas of the 21st century: Kevin Puts' Silent Night and The Manchurian Candidate, Philip Glass' Waiting for the Barbarians, and Jake Heggie's Dead Man Walking. So the company can be trusted to draw you into this story and its environment and the human drama at the heart of it. Be assured that when these climbers fight for their lives at the top of the world – and especially when they're singing – you'll be on Everest right beside them.

A version of this article appeared in print on January 17, 2020 with the headline: Into Thin Aria