"The Sorcerer's Burden: Contemporary Art and the Anthropological Turn" 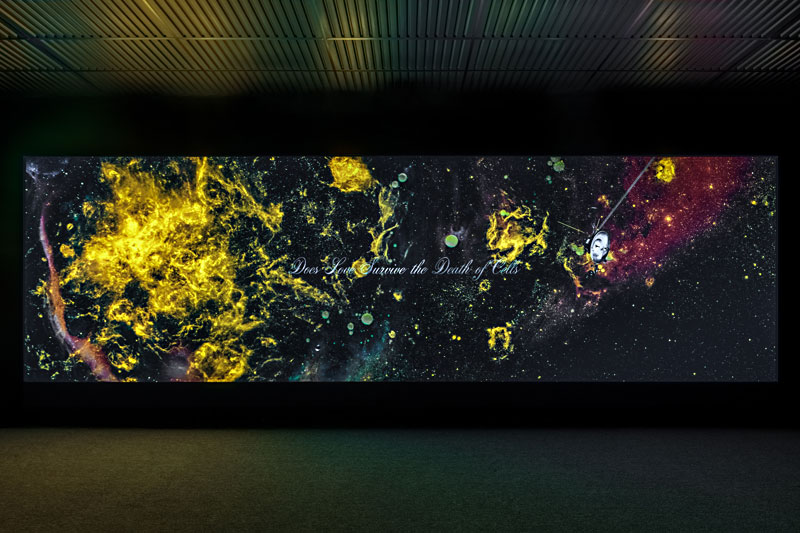 The terra-cotta canine with the thick ring sticking out of its back looks like it was lifted from the pre-Columbian wing of some natural history museum. The rounded quality to its form and features, stylized into an everydog and then compacted into an earthenware mold, harkens back to a culture hundreds, if not thousands, of years old.

The pedestal it sits on, however, isn't one of those plain, blank blocks that museums favor for showcasing artifacts. Rather, it's a plywood column with an open face in which there are two levels, each with two pieces of plywood slanting into an almost-V and backed by purple Plexiglas. If you can imagine a Donald Judd collection from IKEA in the Sixties, this would be in it.

In actuality, this piece was made in 2014, and both its halves were fashioned by Nathan Mabry in a deliberate effort to merge the ancient and the contemporary – that which holds mystic power in the larger community and that which represents aesthetic progression in the cultural scene. You can discern a playfulness to the fusion – especially after seeing its title, T/O/T/E/M (...dog eat dog...) – but you can also sense a certain weightiness, wondering how these opposite ends of the artistic spectrum can fit together. Or can they? The more you consider not just the styles of these pieces but the cultures that produced them and their respective histories and how each is regarded today and, and, and ... well, the more you question how they can belong together in any way.

The art has you turning down an anthropological path, which shouldn't be unexpected for an exhibition titled "The Sorcerer's Burden: Contemporary Art and the Anthropological Turn." For this wide-ranging, ambitious show at the Contemporary Austin, curator Heather Pesanti wants us to see how many of today's artists are making work with an anthropological bent. To that end, she's assembled works by 11 artists whose practices are influenced by issues of history, sociology, science, and culture.

It's an exhibition that asks a lot – a lot of questions, for one thing, about how we live and how we perceive the world, especially given societal biases of race, class, and culture; but also a lot from the viewer, in that it wants us to dive deep into those questions and consider them, and to do that requires time and patience. "The Sorcerer's Burden" is spread over both museum campuses (the Jones Center Downtown and Laguna Gloria) and much of it consists of lengthy videos – just to see the four at the Jones Center in their entirety takes an hour and 45 minutes – and this is one exhibition in which reading the wall text will make a substantial difference in grasping what it's about. For every work like one of Mabry's totems that may generate questions without explanation, there's a work like one in Kapwani Kiwanga's Glow series – each an abstractly shaped black sculpture with an LED light embedded in it – for which the questions might elude you without the context Pesanti provides. (In this case, the sculptures refer to 18th-century "lantern laws" forcing people of color to carry lit candle lanterns when they walked in New York City after sunset.)

Knowing the background to some of these works, you may find yourself lingering before them to draw forth more of the connection between the art and its inspiration, as I did with Kiwanga's Flowers for Africa: Ivory Coast, an arrangement of flowers by a local florist, based on an arrangement seen in historical images of African independence. The flowers were fresh at the exhibit opening and have been dying and wilting during its run. So where did she see the original arrangement, and what else was in the image? When did that take place, and what's been happening in Ivory Coast since? Is the withering of the flowers a reflection of the country's history since independence, or is this a warning? I should know more.

Each work in "The Sorcerer's Burden" deserves its own investigation, the kind of investigation that can't be conducted in this limited space. But I'll devote what space is left to discussing Dario Robleto's The Boundary of Life Is Quietly Crossed. Commissioned by the Contemporary Austin, this expansive video takes us inside the chambers of the heart before hurling us into the cosmos. Robleto begins at his grandmother's deathbed, her pulse fading, which leads him into the history of how heartbeats began to be measured in the mid-19th century and also into the first strange attempt to record a fetal heartbeat (which involved a soap bubble and a glass needle thinner than a human hair). In telling the story of the heartbeat included on Voyager 1's Golden Record, the artist finds the intersection of science and romance – love blossomed between researcher Ann Druyan and astronomer Carl Sagan, and it's her heart beating for him that's inscribed on this interplanetary message that has now passed the edge of our solar system and will keep that heartbeat going beyond the life of the person it belonged to and possibly beyond the life of the human race. The video returns to Earth to discuss the development of artificial hearts and one that doesn't beat, which leads Robleto to question the implications of our culture without heartbeats. The video is fascinating for both the hidden science it reveals and the humanity of the artist it exposes. Robleto opens himself up to show us his heart, and his sensitivity, tenderness, and wonder make this a beautiful experience, well worth its 51 minutes. You leave with big questions, yes, but also with a sense of deep connection to those around you.

“The Sorcerer’s Burden: Contemporary Art and the Anthropological Turn”

A version of this article appeared in print on January 3, 2020 with the headline: Load of Questions